Take part in a short film production which aims is to show the wakeboard to the general public in all its forms. 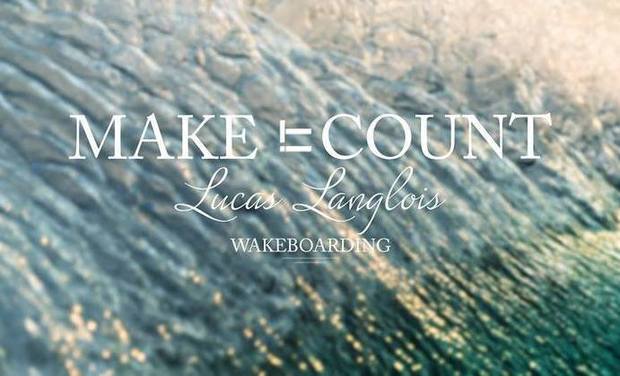 After the success of the 2013 edition and with over 100,000 views in a few months we decided to work on a project bigger, better and more impressive movie than the previous one. Our goal is to give people a taste of wake boarding, which is still not very well known and lacks media coverage.

"Make it count" refers to the fact that 2014 is probably my last season of intense riding and the importance of enjoying every moment. We decided to go back to the places where I used to ride in my early days: the first competition spot, the first cable i rode and the club that has supported me since day one. All these places still exist and see the best wakeboarders come by even today

So if you want to see more tricks, more fun, more wakeboarding Support us!

Bio: Toast Production Sarl is a young company specializing in the creation of promotional videos, corporate films, event coverage as well as photography. Having made ​​his debut in the world of sport, it is the ideal company to be able to carry this kind of project.

We decided to ask for help here, to the Kissbankers because we want to limit from private sponsors so the video isn't the victim of excessive product placement. Doing this will allow us to decide freely of our moves and our decisions regarding the creation of our film.

The funds raised will be used to fund several things:

- Travel expenses of the crew throughout the week the film will be directed (we'll move to a different spot each day):  Estimated cost + toll Essence:

- The accommodation charges each spot and meals even if you do not plan to make 5 * all night. :)  accommodation:

- Rental of equipment which the crew are not yet available (high speed camera, lighting): 500 €

- The realization of the soundtrack by indie artist: http://www.micheljanssens.ch: 300 €

If the project reaches € 2,500: then we can make a night session wakeboard cable, which will make the video almost unique in its kind.

If the project reaches 3500 €: we can produce images with a drone that will catch impressive views.