Support Makimon - the caring "ghost" of your home! 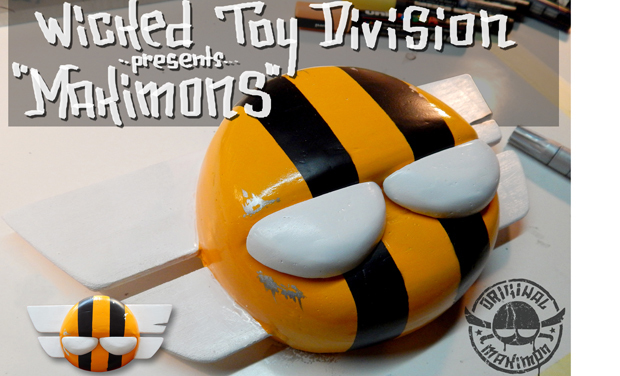 Hello! My artist name is Manu Maki Man. Why Manu Man? Probably because I'm good with my hands. I was called thus by the members of an Jamaican band when I was young. Maki comes from my family, my grandmother and my brothers. I want to present You the studio Wicked Toy Division. After more than ten years of work in the "shadows" and on the streets as a street-artist, my brother Vladimir and I have decided to launch the Wicked Toy Division.   When we were kids, we spent a lot of time playing in trying to find every time something new and interesting. Sometimes our ideas went into a total frenzy and became terribly complex with strong dramatic plot that could last several weeks. We even managed to invent our own language so that no one can understand us and so communicate quietly on our "projects". In our fantasy world, music plays a very important role: we've both learned to play various instruments. Later, we started to create more seriously: Vladimir turned to theater and music, and me to the film and television while continuing to make music. After a few years working in various editorials of national television, I was invited to participate in the creation of a new advertising company that became one of the very well known.   The drawing, in more or less all of its techniques, has always been present throughout my life, but I never enrolled up to a school so far. It was time to put my skills to a higher level so I seriously started to learn and improve myself with the great masters of art in the fields of the comic strip, from storyboarding, graphic design, animation , 3D modeling etc. Along with all these "traditional" advertising projects, I continued my street artist activities by creating murals tags and other projects.   The Wicked Toy Division is the logical result of all these previous steps performed alone or with various colleagues and teams. With all the trends, techniques and genres already mentioned, I was always fascinated by the toys. So I started to collect used or discarded toys, turning them into real small works of art.   For decades, I collect hundreds of thousands of projects and ideas. I had the opportunity to finalize some of these projects and show it by participating in various group exhibitions of "underground" artists.   To launch the studio Wicked Toy Division, we divided the tasks: Vladimir handles the administrative, production and communication, and I do the artistic part of the work.   We thank you for your support and look forward to seeing you soon for new projects Wicked Toy Division !!!

They can be hung on the wall or placed on a shelf, but can also be hung on the facade of the houses and buildings. So these are works that can be both for indoors and outdoors.

We also want to create special cards for each Makimon and each card is produced manually. So, each card will be unique too!

The next step is the production of cardboard packaging for each mask so that it can also be used as a stand in case anyone wants a Makimon on the table, on the shelf or other ..

And this is our studio. Nice, isn't it?

We will use your contributions to :

1. Continue the production of Makimon - buy necessary material for the fabrication : 2000

The total amount of this first project is 3500€, thank You for your support!!!!

We will mention your name and send You a HUGE THANK YOU on our web site as well on our social networks pages!

THAAAANK YOU AGAIN ! We will send You a hand made unique original card of one Makimon of your choice!

AND ONCE AGAIN : BIG THANKS ! We will offer You a unique and original hand made poster of Makimon of your choice!

A HUGE THANK YOU FOR YOUR CONTRIBUTION & SUPPORT !!!! We offer one Makimon wall mask with its card and a poster!

ENORMOUS THANK YOU !!!!! We offer You two Makimon wall masks with their personalized cards!