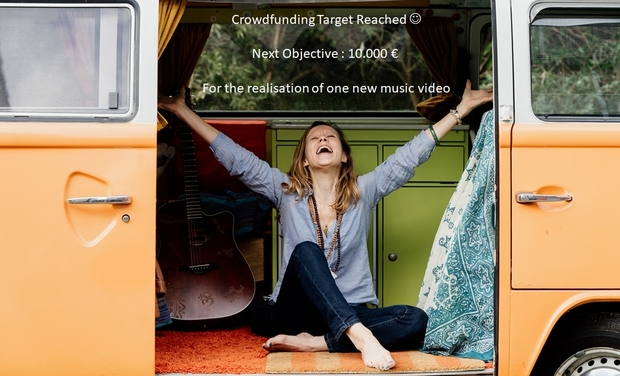 My stage name is Me'Asa Weyo. I am a Belgian singer-songwriter, choir director, and also a teacher of singing and musical comedy.

I begin my life as an artist in 2010 with a concert in a bar in Brussels, the "Tels Quels". In 2015, after many concerts in Belgium and France, I released my first album, "Way Of Indigo", a personal album with multiple musical influences (afro, soul, pop, funk) that recounts the most memorable moments of life from the previous years of my personal journey.

Alongside this first album I produced two music videos ("Nowhere To Go" and "Feel") and recorded two live sessions ("You Say" and "Sad Song") which I am extremely proud of, and you can discover on Youtube.

Between 2015 and 2019, I performed concerts in Belgium (Botanique, Acte 3, Place Royale, Panafrican Festival, ...) and, in parallel, began to compose new songs. The first of these is "Better People", a song that explains how I think it is urgent that human beings become "better" and change their behaviour towards nature as well as towards each other. The other 9 songs are linked to this point of view and each one is the result of examining how to positively work on myself and the desire to share the benefits I have personally discovered from this examination.

Since 2010, I have come a long way! I am delighted to announce that "Impulse Sounds & Events" now accompanies me in the development and management of my artistic project.

I am also joined in the adventure by a whole team who help me progress the project, while preserving the colours and values of it:

My request to you today comes because I'm currently working on a new album ... "Movements of Life".

"Movements of Life" is a journey between reggae, afro, pop, soul and funk. It is also 10 songs that evoke the way we are all, in a way, connected, and the desire to exploit these connections to finally begin to treat life as it should be treated.

The album also discusses one of the greatest lessons I've learned this year: "The universe, or whatever you call it, always speaks to us, always sends us little messages, and always reminds us to look around and believe in something else, something more ... "

Here are the titles of the songs of the album "Movements Of Life". (The order remains to be determined):

- What The Silence Holds

- In The Life (Polari Song)

- Just A Little Bit Of Freedom

Your support will help me to engage very talented musicians on this adventure:

- Arnaud Sirtaine (Handpan on "What The Silence Holds")

- Sonia Gotikian (piano on "What The Silence Holds")

- Alexis Ceccaldi (piano except "What The Silence Holds")

I am also pleased to announce that no less than three other singing artists have agreed to take part in the adventure, and will therefore do me the honour to lend their voice to this project that is close to my heart!

There will be a fourth 'featuring' special to me, on a song just as unique: "What The Silence Holds", a piece I wrote for my son, born in December 2018, and about which I will speak in the course of the recording.

All these names will be revealed to you as the album progresses!

It only remains for me to thank you in advance for your interest and your participation! See you soon!

Everything is ready! The arrangements of the songs are finished, the album cover is in progress. We have the studio, the graphic designer, a designer for the cover, the sound engineer, the musicians ... We only need your help to go to the studio!
The total costs related to the recording of this album amounts to approximately 21,150 euros. This crowdfunding will not be used to cover all the costs incurred by the recording of the album but only part. The rest will be financed by personal funds.

IF WE EXCEED THE OBJECTIVE:

Music video for one or more songs (depending on the amount obtained).

Acknowledgement in the booklet of the album + my two albums signed in CD format + A CHOICE between: - Option 1: a private singing class (one hour at my home in the Brussels area during 2020); or - Option 2: two places for a private concert.

Just a Little Bit of Freedom

Acknowledgement in the booklet of the album + two places for a private concert + my two albums in CD format + new album in VINYL format + A CHOICE between: - Option 1: a day with me as part of the filming of my next music video. - Option 2: 5 one hour private singing lessons at my home (Brussels area), during 2020; or

Acknowledgement in the booklet of the album + A CHOICE between: - Option 1: private acoustic concert at your home (in Belgium, in 2020, accompanied by two musicians); - Option 2: my two albums in CD format + the new album in VINYL format + two places for a private concert + 10 one hour private singing lessons at my home (Brussels area), during 2020.

Acknowledgement in the booklet of the album + A CHOICE between: - Option 1: a private concert at your house or during your event in Belgium (accompanied by 3 musicians); or - Option 2: my two albums signed in CD format (or the new album signed in VINYL format and my first album for download) + two tickets for a private concert + one year of singing lessons (30 one hour lessons at my home (Brussels area), during 2020 and 2021).

Acknowledgement in the booklet of the album + A CHOICE between: - Option 1: a tailor-made concert (contact us first if outside Belgium); or - Option 2: a private concert at your house or during your event in Belgium (accompanied by 3 musicians) + my two signed albums in CD format (or the new signed album in VINYL format and my first album for download) + two tickets for a private concert + one year of singing lessons (30 one hour lessons at my home (Brussels area) during 2020 and 2021).

What The Silence Holds

Acknowledgement in the booklet of the album + A CHOICE between: - Option 1: Me'Asa Weyo composes a tailor-made song for you. Place your order and we will take care of everything (composition, arrangement, mixing); or - a combination of rewards (to be defined with our management team). Option 2: Make your choice!