In November 2016 we are mounting an exhibition of the American media artist JOHN SANBORN. 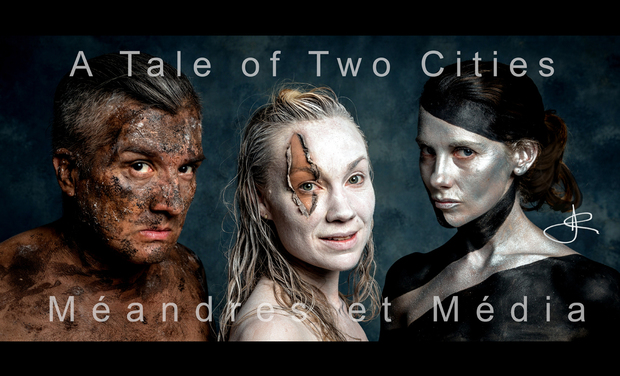 The group Bandits Mages, in Bourges, France, presents international media art featuring cutting edge works from artists who speak to significant modern issues, through workshops, lectures and screenings – bringing the strongest ideas and attracting audiences from France and abroad. The works are experimental, controversial, conceptual and political and are enjoyed within a climate of generosity shared by the artists, the festival and the audience.

In November 2016 we are mounting an exhibition of the American media artist JOHN SANBORN, whose career spans decades, from the 1970’s to today. His important and pioneering works have influenced a generation of artists and we are focusing on his career with a retrospective that will include early New York works, key collaborations with composers and choreographers, and works made since he relocated to California in the early nineties, on the cusp of a non-lnear world.

In conjunction with the retrospective at the "Rencontres Bandits-Mages" we are planning to showcase media installations by JOHN SANBORN placed in historic locations around Bourges. Each work is designed to complement the historical significance of this city.

The works are operatic; some have been shown in international venues, notably Berlin and Bangkok (where the Bangkok Art and Culture center welcomed thousands of visitors to a large show of his recent installations). Two works will be created for this exhibition and will premiere in Bourges. To do this we need your help.

This exhibition is scheduled to open from end of november to end of december.

Bandits-Mages is  an organisation committed  to offering a transmission platform for residencies, production, experimentation, research and dissemination within a wide contemporary media sphere that includes video, cinema, sound as well as digital and electronic objects. Possibilities that confer a fluide and modular identity to Bandits-Mages, and allow for thought and concept to find its marks in the works of those using the tools our structure provides. We are driven to support important issues, including queer practices as well as the relationship between human and non-human.

The new works you are helping to support are a mix of music and mythology- stories about what it means to be human in the 21st century.

“The Temptation of St. Anthony” is an immersive opera, where the viewer will stand in the middle of a musical retelling of the story of this man who, once having found his faith, is profoundly tempted to give it up.

This new work is a true modern opera, with music by New York composer, Dorian Wallace (10th Intervention) and libretto by Sanborn. It will be presented as a world premiere in the Palais Jaques Coeur, dating from the 15th century, in a magnificent hall with vaulted ceilings and molded wooden details. The installation uses multiple channels of video projection and 360-degree sound to plunge the viewer inside the conflict between a humble man and the devil.

A second work you will be supporting will be “Losing the Human Race” that speaks to the divisions in the world and takes viewers from observers to participants in a global dialog about prosperity and sanity.

This simple work combines recorded testimony of 20 everyday people, commenting on  loaded and controversal issues– race, politics, religion, sex, violence and death. As they speak, the words they say distort their faces electronically turning talk into portrait. The more passion in their voices, the more fractured their images become.

This collage is projected on a screen, in front of which hang five Mylar strips – which reflect the light from the video onto the viewers, so that their images are reflected in the Mylar. This merges the powerfully recorded voices with the previously passive viewers – encouraging them to cross the line and get active.

The collected amount will help in creating the works and assist in the conditions of the exhibition. It will also provide for transportation costs to France of artist John Sanborn and the exhibition curator, Stephen Sarrazin.

Finally, it will allow us to covers costs for an editing team.

As the collected funds grow, so will the quality of the exhibition. If we go above the stated figure, we will use such funds for a publication that will accompany the John Sanborn retrospective.