Help me give Medieval and Renaissance Organs a new life! 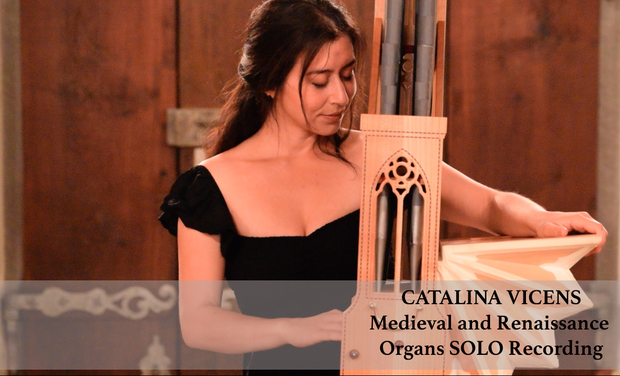 After years of performing around the world on the medieval portative organ (also known as ‘organetto’), I have finally decided to record a solo double-CD dedicated to much of the music I love and I already had the chance to explore and share.

Besides this highly expressive little-organ, I’m also fascinated by the diversity of sound-worlds that other historical organs provide. For this, I will feature the work of organ builders who have dedicated their lives to the research and reconstruction of late medieval and Renaissance organs and some of the earliest surviving gothic organs.

Given the diverse sound-worlds that these instruments provide, I don’t only want to showcase them with the music that could have been performed on them hundreds of years ago, but my commitment is also to give them a new life. That is, pieces which were already written for me and new commissions, as well as improvisations. Both old and new will be equally important.

Much of what we know about these instruments is through the musical iconography of the Middle Ages and the Renaissance, (that is, through paintings, sculpture, book miniatures, etc.). Thanks to these artistic documents, builders and players can find clues on how to ‘reconstruct’ instruments and new performance practices. But also, to inspire.

That's why I want this element to be translated into new inspiration for this CD. Besides including historical depictions in the CD-booklet art, I've asked several artists from around the world to collaborate in this mission to give these old instruments a new life again.

Today, Vicens combines a vibrant international soloist and research career. Having specialized in performing on antique keyboard instruments, she has been invited to play on the oldest playable harpsichord in the world, featured in her latest recording “Il Cembalo di Partenope” (Carpe Diem Records, 2017);  the 15th century gothic organ of St. Andreas in Ostönnen (one of the oldest and best preserved organs in the world); the Neumeyer-Junghanns-Tracey Historical Keybaords Collection in Germany, where she recorded “Parthenia 1613” (Carpe Diem Records, 2013), as well as several collections in the UK, Europe, USA and Japan. She is also recognized for her work with medieval portative and positive organs, clavisimbalum and clavicytherium. Vicens has been invited as guest teacher, giving specialized courses and master-classes on harpsichord, fortepiano, medieval and chamber music in places such as the Longy School of Music Cambridge (USA), Universität der Künste Berlin and the Folkwang Universität der Künste Essen (Germany), the Renaissance Academy in Lunenburg (Canada) and teaches regularly at the Early Music Course at Burg Fürsteneck and the International Portative Organ Days in Germany, which she curates since 2011. In 2016 she served as jury member at the Jurow International Harpsichord Competition.

Catalina Vicens studied historical keyboards at the Curtis Institute of Music with Lionel Party, at the Musikhochschule Freiburg with Prof Robert Hill and at the Schola Cantorum Basiliensis with Andrea Marcon and Jesper Christensen.  She also received a Master’s Degree in Medieval Keyboards with Corina Marti at the same institution (world’s first). She later specialized in Contemporary Music Performance on historical keyboards and took courses in historic and traditional percussion instruments. Catalina is currently Ph.D. candidate at Leiden University / Orpheus Institute Ghent, under the supervision of Dinko Fabris and Ton Koopman.

Vicens performs and records regularly as member of ensembles of Medieval, Renaissance, Baroque and New music in Europe, USA and South America. She is artistic director of Servir Antico, with whom she aims to shed light on the less-known repertoire and intellectual heritage of the humanistic period (13th-16th century). As an orchestra member she has performed under the direction of well-known conductors such as, Otto-Werner Müller, Gottfried von der Goltz, Andrea Marcon, Skip Sempé and Carlos Miguel Prieto. www.catalinavicens.com

With the MINIMUM amount, we can produce

If we surpass the minimum costs, funds will go to:

Commission of new pieces and artwork

The recording will take place during Spring 2019 and will be released Fall 2019. You'll be the first one to know the release date!

You'll get a personalized thank you note!

You'll get a thank you note and a digital recording

You'll get the double CD, warm out of the press, with a personalized thank you note.

You'll get two double CDs with personalized note and a mention in the recording's website.

You'll get two double CDs with personalized note, a digital recording and a mention in the recording's website.

You'll get two double CDs with personalized note and the digital version PLUS another of my solo CDs of your choice + a digital recording of your choice and a mention in the recording's website... plus a special treat.

You'll get 2x double CDs with personalized note and the digital version PLUS 2x my featured CDs of your choice + its digital version and a mention in the recording's booklet PLUS: an exclusive calendar with the organs and artworks feautured in the disc

All of the above, plus a private concert in Switzerland or The Netherlands

My inmense gratitude, and the pleasure to be able to share the music I love with you personally! All of the above plus a private concert at the place of your choice (travel and accommodation expenses to be covered appart)