Come bet with us! 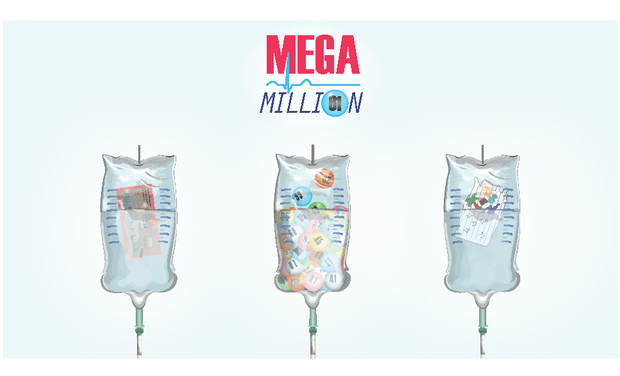 No, we won’t ask you for millions!

Mega Million is a short film project that we attempt to shoot in June 2014. MFA2 students at EICAR (Paris - France), it is with great enthusiasm that we’re all working on this project in order to help the director, William Van de Walle, to complete his thesis film.

Mega Million traces the story of Loïc, a middle aged regular customer of the café Jeanne, a little Parisian cafe. In his monotonous life, Loïc finds himself confronted with a massive problem: his old mother is dying. It’s been months that she’s waiting for a new heart. Loïc managed to find a belgian surgeon who will accept to illegally perform surgery on his mother but he is asking for 300 000 euros.

Jobless, Loïc decides to try his luck at Mega Million. His advantage? He is (just) a math genius and can solve your level 5 sudoku game without thinking while he is telling you about how to solve Wallis’ integrals without deriving any continuous functions.

Through the story, we will follow Loïc in his utopian yet sadly desperate pursuit of the perfect solution.

At the end, we will be sad.

At the end, we will also be happy.

At the end, we will actually understand that even if everyone can influence his own luck with work, toughness and self-confidence, no one can really control faith and destiny.

Talk about the film

The thing that you can be sure of, is that we’ll laugh!

This film will indeed be treated as a nice black comedy.

The way the movie will be shot will emphasis that commitment of making the viewer awkwardly smile in this tragical situation. Thus, we have a lot of great technical ideas about how to bring those expectations to life!

In order to be as close as possible to our objectives, we decided to shoot the film with the Red Epic camera. Yes, the same one as « The Hobbit », « Captain America » or even « Hitchcock »!

Interested? We will update each week news about the project!

You will know everything, from casting sessions to location scouts; from wardrobe fittings to technical meetings!

After the shoot, you will be emerge into the post-production process. Yes, you will see the picture editing, the color grading or even the process of the music composing!

And obviously, the shoot itself will be filmed by a special crew member dedicated to this!

Our shoot will take place from the 25th to the 29th of June, it will be a five day shoot which requires a lot of organization but that is why we have such a great crew! Our crew is prepared and ready to take on any challenge.

One of the things that we believe will benefit this film is it’s international crew, we have crew members from all over the world working together and joining their visions and ideas for the realization of “Mega Million”. I am closely working with each of my heads of department to achieve the best we can achieve for this film, I believe in my crew and I hope you do too!

As you all know a good film is both the crew and the cast, we already have our crew but we are still looking for our actors who will bring life to our characters. We will be posting updates as soon as our auditions start, beginning of May.

-Loïc Freynet! Brillant actor who will play the main role.

Loïc had the first role in William's first ever short-film and the work he brought was so astonishing that William simply wrote Mega Million thinking about Loïc for the main character. He will bring the dark humor that we're seeking for this film.

-Alexandre Massonet who will play the part of Jean

William did not think a lot about the part of Jean. Having friends in common, they first met half a year ago and William had the opportunity to see Alexandre's talent. This role will suit him like a glove.

Where will the funds go?

If we were able to make this film purely out of hard work, passion and dedication, we would definitely have already done so, but sadly we can’t, a film does need a certain amount of monetary funds to be able to go into production, that is why we are here, because we need your help!

I know a lot of people ask themselves where does the money go in a film production, and they are usually shocked to find out that most of the money is put into the rental of locations, van, art department and catering.

The funds recollected will be used to cover :

-Rentals (Equipment and Van) : We will be moving around the city during our 5 days of shoot, therefore we need a van and some equipment to help us light our different locations! Our budget for this branch is almost 400 €

-Catering : We have a crew of 18, mostly students and 4 actors who give their time and energy for free, that is why we want to make them happy and a good lunch during a long day of work is the minimum we can give them, as you all know, The key into a man’s heart is through his stomach! Feeding 22/25 people for 5 days is very expensive and we plan on spending at least 300 € for this.

-Locations & Production : We will be shooting in 3 different locations, a bar, a hospital and an apartment. Unfortunately you don’t always find these for free, so we have a small some to offer to their owners as an incentive for their rental. Just the hospital will cost us 500 €...

-Art Department : one very important aspect of every film, one that usually passes unnoticed, every prop and object that is on screen was put there on purpose, that requires a lot of work ! Even though our Production Designer is the best at finding cheap things, we will give her up to 300 € to help her recreate a believable set.

-Post production : A good film requires post-production work, specially with sound and the composing of the film, the film is not finished until it is presented before our audiences. A single hard-drive can cost up to 150 € and we will need 2 of them for the shoot!

Yes, our budget is higher than what we are asking for, so if you see we are reaching our goal you can continue to help us!

As you can see your contribution, would help us make this film an amazing one. Any small amount will go a long way in getting us closer to realizing our dream of making this film.

Other ways you can help us:

If you would like to help us monetarily but can’t, we understand.  All we ask is to please share this campaign with everyone you know. Maybe a friend of a friend can also help...

Hoping you’ll believe in the project the same way we do, thanks in advance for your generosity !

A personalized thank you email from the director.

Your name will appear in our credits with special thanks + everything mentioned above.

An exclusive download link of the final film + everything mentioned above.

An exclusive download link of the making of + everything mentioned above.

A DVD of the film and the making of + everything mentioned above.

The opportunity of being a day on set with the cast & crew + everything mentioned above.

The opportunity of being an extra in the film for 2 days on set + everything mentioned above.

The official title of co-executive producer in the credits + everything mentioned above.