Support the work of two photographers by helping them to edit their first art book, the result of years spent in the Southern Seas.. 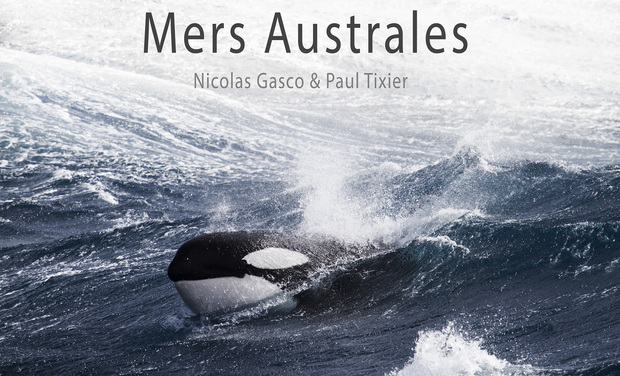 Latitudes 40° and 50° South, these frontiers are both scary and fascinating. They are the gate to the Southern Seas and for all the sailors of the world, they have been the limit of the « unknown » for centuries. They have been called the « roaring forties » and the « furious fifties » because of their winds, the strongest winds of the world.

However, the powerful storms and rough seas are home for a wonderful Nature. In the kingdom on westerly winds, a unique community of seabirds and marine mammals has adapted to these extreme conditions.

Two photographers, Nicolas Gasco and Paul Tixier, have each spent years of their life in the Southern Seas, off the Crozet and Kerguelen Islands. For months, on boats that were totally on their own, they brought unique pictures from this unknown region.

They want to share these pictures with people through a 128 pages book of photography, the first of its kind. Other than a simple testimony from few days spent at sea, this book would show pictures from the experience of a lifetime.

This project has emerged after we came back from our last trips in the Southern Seas.

We chose to combine our photographic work to increase the scope of the pictures taken and the species encountered. However, the main idea was to combine two « photographer’s eyes », with two distinct feelings and backgrounds to tell the story of the Southern Seas.

« The story I wanted to tell through my photographs was a succession of steps as I witnessed it every time I went to the Southern Seas. »

« At first, these seas look like a rough desert in which life could not exist »

« However, after few days spent at sea, the first animals show up, one albatross, and then another one. They use the strong winds to fly just above the waves, without never fapping their wings »

«The killer whales then arrive. They seem to be playing with the huge swell, using the waves to swim more easily. This is their world and the size of the elements they master is way bigger that a human scale.»

« Then Nature abounds. Sea birds like petrels and albatrosses are now thousands. With the killer whale they form unique processions at the sea surface.»

« The community of the Southern Seas is now reunited, until the winds drop. During these rare moments of calm seas, for the first time we can hear the blow of a whale or the sound of a bird flying.»

« For me seascapes are fascinating. Water is always in motion. Every squared inch is changing from one moment to another, winds shape and carve. »

« Seabirds are the witnesses of these seascapes, unlike Man, which has started to go in the roaring forties just recently in History. »

« Every photograph freezes 1/1000s moments, one tiny piece of testimony compared the millions years and the hugeness of this ocean. »

I combine scientific research with wildlife photography. My favorite destinations are the high latitudes, these sanctuaries that are still inhabited by great predators.

After spending several years in the northeastern Pacific where I have trained in photography techniques, I experienced the Southern Ocean for the first time in 2008 through a 3-month trip at sea. It was a totally different world for me, extremely different than the calm waters of the Canadian fjords.. I was there to study killer whales off the Crozet Islands as part of a Ph.D.. Other trips followed after this very first one, and all cumulated, I spent nearly one year in these offshore waters.

The wildlife I encountered in the Southern Seas was truly exceptional, and my pictures have become for me the best way to talk about it. I especially like stormy weathers to take photographs, although some of my camera gear did not always make it…

My first trip in the Southern Seas was in 1994. Back then I worked around the Kerguelen Islands, both on land and in the offshore waters. After spending more than one year there, I immediately went back South. This time it was to work in high seas only, on russian boats that would go offshore for periods of 7 months. This was the first trip and numerous others followed until my last experience in 2010.

All together, I spent more than 4 years of my life in the Southern Seas among killer whales, sperm whales and all the amazing sea birds of this part of the world. I now work for the National Museum of Natural History of Paris.

This project is a true achievement of several years spent on boats in the Southern Seas. The book presents a selection of pictures, with the first ones taken in the late 1990s, that captured some very rare moments of wildlife in offshore waters.

Your support will for the self-edition of this book. With a minimalist style, we want this book to be edited with an artistic quality, using a type a paper and printing properties that will get the best out of our photographs so you can fully appreciate the beauty of the Southern Seas. The book would be edited as 24x30cm horizontal format, with 128 pages on a  special 170 g mat paper and with a hard cover.

The total costs of making this book rise up to 9,200 €. These costs include:

the design of the pages and the quality control (colour and lighting) of photographs before the edition (1,600 € for a professional book designer) the edition: tests and printing of final pages made by the professional printer Escourbiac   (7,600 €)

We will provide part of the needed funds. However, this book cannot be achieved without your help!

Your contribution will be critical to meet the full budget of the project.

If the 5,000 € fund rising was achieved, it would allow to have the sufficient funds to complete the design and the edition of the book (4,200€) and to cover the crowdfunfing costs (recompenses for our supporters, shipping costs and Kiss Kiss Bank Bank fees).

The price of the book for KissKissBankers is 30 € (regular price: 35 €) and it goes with additional products: books will be signed and you will get various kinds of prints, including fine Art prints (signed and numbered on high quality paper) in limited edition!

And if, by chance, your contributions would go beyond the requested amount, the funds would also be used to :

increase the number of copies ; display the book in numerous bookshops and other shops ; and last but not least, the funds would allow us to make a unique exhibition!! The best photographs would be displayed in several art galleries and festivals, where we could actually meet in person!

We count on your help to put together these photographs into a beautiful art book! :-)

If the project is achieved with your help, the book would become available in late April and KissKissBankers would receive the book(s) at home in May 2016.

With SEDNA as a partner

Huge thanks for your support!

Huge thanks for your support and two postcards!

Huge thanks for your support and 1 A4 print!

Huge thanks for your support, one book signed and two postcards

Huge thanks for your support, 1 book signed to your name, 3 A4 prints and 2 postcards!

Huge thanks for your support, two books, one signed to your name (unless you want the second signed as a gift for instance, please let us know by email), one A4 print and 2 postcards!

huge thanks for your support, three books, one signed to your name (unless you want the second and/or the third ones signed as a gift for instance, please let us know by email), one A4 print and 2 postcards!

huge thanks for your support, three books, one signed to your name (unless you want the second and/or the third ones signed as a gift for instance, please let us know by email), one 20 x 30 cm Fine Art Print, signed and numbered from 1 to 30, and two postcards!

huge thanks for your support, three books, one signed to your name (unless you want the second and/or the third ones signed as a gift for instance, please let us know by email), one 40 x 60 cm Fine Art Print, signed and numbered from 1 to 30, and two postcards!

huge thanks for your support, three books, one signed to your name (unless you want the second and/or the third ones signed as a gift for instance, please let us know by email), one 75 x 100 cm Fine Art Print, signed and numbered from 1 to 30, and two postcards!

huge thanks for your support, three books, one signed to your name (unless you want the second and/or the third ones signed as a gift for instance, please let us know by email), one 100 x 150 cm Fine Art Print, signed and numbered from 1 to 5, on Alu Dibond!!!!!