Support the documentary of Marc HURTADO in collaboration with the singer, musician and artist Lydia LUNCH 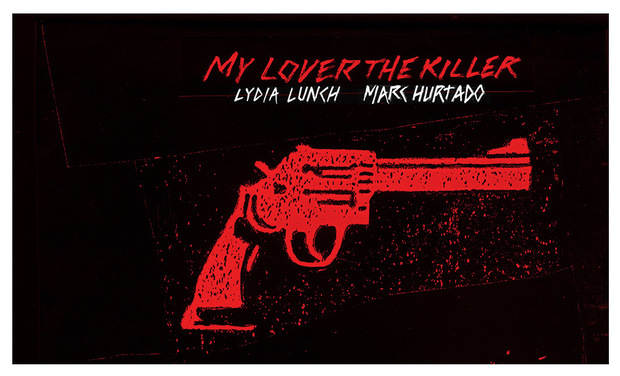 Lydia Lunch is a longtime friend. This particular closeness will allow me to create an intimacy in the film and to dive deep into the complex arcanas of the life and work of this outstanding creator.

The film wants to focus on the humanity of this artist, but also the complex links woven between his personal life and his work. This friction will attempt to open reflexive and sensitive gaps on art, creation, and more broadly our relationship to the other and the fable.

MY LOVER THE KILLER follows Lydia Lunch  around the world and tries to discover, buried in the labyrinth of his life and his tumultuous work, the incredible story of Johnny O Kane, his first great love that will eventually  kill his girlfriend and commit suicide.

Lydia Lunch saved her life thanks to art, her main focus of concentration was  to invent a new revolutionary form of musical and scenic expression. She has never stopped linking various artistic project with  this personal touch that she defines very well:

"Part of the charm of my work comes from the fact that it is not related to anything that we have known before (...) the only way to describe my work is simply not to try to describe it" .

I want to make  MY LOVER THE KILLER with a very small team of 2 to 3 people to keep a great simplicity of filmmaking. I would like to follow Lydia Lunch for a year in Europe and the United States and edit my images with some of my older films and archives belonging to the artist herself. The variety of sources and the nature of the images  requires a very precise writing work to give a formal coherence to this set.

In MY LOVER THE KILLER, we will be guided by Lydia Lunch, who defines herself as "a nomad in constant metamorphosis", she  will give us a kaleidoscopic lighting on her art, always intrinsically linked to the cities she crosses, to her entourage and her « ghost »  lovers .
This film must have the circulatory and gyratory force of a carousel  ride, this magical space that emerges from the shock created between reality and fiction.

The presence of the word, the testimony, our exchange, is essential in this film and  carries the story, the legend of Lydia Lunch."

"I've been doing cinema since I was fourteen, in 1976, starting with experimental films shot in 8mm film and then moving towards documentary / fiction films made in super 16mm and  video. I started the music at the same time as the cinema, the two are inseparable and this is one of the reasons that led me to make movies with musicians.I discovered Lydia Lunch in 1977, it was a shock of unheard-of violence. Her music and her lyrics have accompanied me indefectibly since that time. We collaborated together in 1998 on one of my records of Etant Donnés .

In June 2012, I started with Lydia Lunch to record an album together called MY LOVER THE KILLER. The project begun with a first text written by Lydia Lunch, "Ghost Town", a story in Los Angeles featuring Johnny, a handsome young man, who becomes more and more violent, until preparation for the murder of his girlfriend, played by Lydia Lunch in the song.

MY LOVER THE KILLER is the name of our musical project, but it also refers to Johnny O Kane who, in his life, was the first  great love of Lydia Lunch.Met shortly after arriving in New York, she shared with him her first experiences of the street and its procession of extreme adventures. Victim of the violence and madness of this man, she will leave him after three years of life together, fearing for his life.

On November 2, 2012, date of Johnny O Kane's birthday , he kills his girlfriend and commits suicide after a violent fight. Lydia Lunch had just agreed to have an appointment with him that same day, thirty years after having seen him for the last time.The fiction imagined in the text "Ghost Town" became a prophecy written in letters of blood. This event profoundly affected Lydia Lunch, transforming the process of creation of the album MY LOVER THE KILLER and triggering a series of works that she created in reaction to this odious act, unbearable in her eyes.

MY LOVER THE KILLER focuses on the complexity of Lydia Lunch's personality, the confrontation between her life and her work. Throughout the film,  we follow the particular story that connects Lydia Lunch to Johnny O Kane. He reappears several times in his life, each time for violent events marking the life and creation of Lydia Lunch .The film tries to enter into the intimacy of this artist, to understand through our meetings, discussions, trips, what is the part of chance, will, pleasure, games, suffering, fiction, reality that builds his work and their relationship with her personal life.

From my first meeting with Lydia Lunch, I was impressed by her extraordinary energy. The artist has always devoted herself entirely to  art, perhaps in a reckless way that can sometimes put his life in danger. For her, danger is part of the integrity indispensable to the search for a human and artistic truth. I want to try to shed light on the dark and mysterious space that inspires and nourishes this artist, revealing her struggle to acquire a form of freedom and autonomy that she uses to hide the traces of her thousand injuries .I will try to find in the image the order of creation, to show that being is the product of the world and the world is the projection of being. Between the soul and the icon a mediation is established. MY LOVER THE KILLER will be a space-time of contemplation. "

« What began as a loose musical concept in late summer of 2012, became a prophecy written in blood by November of the same year. My Lover The Killer is a late night noir confessional. Sinister, sexy and mysterious, the music slithers, erupts, and caresses the seductive vocals as they relay twisted tales rife with innuendo, promises and threats. The text is based on the murder/suicide of an ex/lover whom Ms Lunch had recently contacted for the first time in over a decade. Caught in the early fall hurricane which leveled the East Coast of America while enroute to Los Angeles, Lydia had sent an invitation proposing that they meet for drinks. Two days later during a alcohol fueled fight on his 55th birthday, he shot and killed his present girlfriend before turning the gun on himself. A tragic event which My Lover The Killer attempts to make sense of, each song a rumination on the frightening effects of a mad love spun out of control and the haunting remnants of a lover who still stalks from beyond even the grave. »

MY LOVER THE KILLER is produced by Too Many Cowboys.

Too Many Cowboys is an audiovisual production company created in October 2012 by Rodolphe Olcèse and joined in 2018 by Pauline Quinonero, who develops his activity simultaneously in the direction of cinema and multimedia, particularly in the context of audiovisual projects for the Web.

Our collaboration with Marc Hurtado tends to set up a production context in which MY LOVER THE KILLER can exist. A conscious artist, nourished by his many experiences in the fields of cinema, contemporary art and music, Marc Hurtado knows how to combine the realities of production with his filmic aspirations without distorting their meaning. Very attached to a minimal art in his technical means, but maximum in its impact, he adapts to  situations, strong of the necessity to create which animates him.

So that Marc Hurtado leaves freely with Lydia Lunch to cross the roads and collect his voice, 8,000 € to the money already collected for the film.

This money will be used to pay for air tickets for New York and Los Angeles, the expenses of Marc Hurtado on locations but also the material useful to the smooth running of the filming.

If we succeed in raising these funds, we could hire a sound engineer to accompany Marc Hurtado with Lydia Lunch and a chief operator to film the concerts that Lydia and Marc are giving together soon. This material would be valuable to the film and would give it extra reinforcement. Any opportunity to shoot more will serve MY LOVER THE KILLER and allow to explore the subject in the best possible way.

MY LOVER THE KILLER is supported by € 10,000 by the CNAP and the Image / Movement device but also by the Occitanie Region, whom we thank for their support.