Participate to the funding of a cooking solution for the poorest that respect people and their environment. 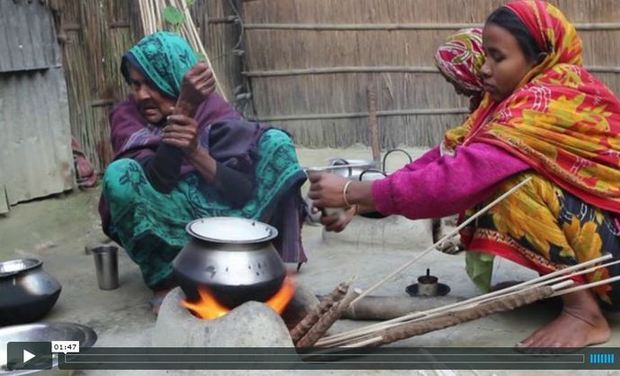 Did you know that three billion of the world’s poorest people still rely on biomass and inefficient smoky stoves to cook their daily meals? For them, cooking is a life threatening activity. Hopefully, Prakti created an award winning solution… In 2013, this social enterprise want to design a new oven affordable to the poorest, with prices decreasing from 60 to 30$. This 15000€ will be dedicated to the R&D in order to design the "Nano Prakti". Help us to give the most in need access to it!

Prakti is a company which designs, manufactures and distributes ovens, especially developed to prevent respiratory disease, fight against poverty and preserve the environment.

How? These ovens save at least 40% of cooking fuel used for cooking and reduce toxic smoke emissions into the habitats up to 90%. We understand the importance of these aspects when we know that in most developing and poor countries, respiratory diseases are the second cause of death, the purchase of fuel (wood and coal) is an important part of household expenditure, and as deforestation have serious consequences on the ecosystem.

Providing a solution to the health, economic and environmental problems, Prakti wants to improve the lifestyle of millions of people worldwide.

Several awards have recognized and rewarded the innovative aspect of Prakti, one of  them being the prize of "Clinton Global Initiative" presented by former US President Clinton and the distinction of "Best charcoal oven" by the Lawrence Berkeley Lab.

Prakti Design envisions a world where people live healthy lives where a need as basic as cooking a meal is not performed in life-threatening conditions.

Our mission is to drastically increase the use of energy-efficient, clean-burning stoves at the base of the pyramid while involving local communities throughout the whole cookstove value chain.

Health: a threat to millions of lives !

Smoky stoves kills 4 million people every year [1]! Walking into the homes of one of the three billion people worldwide who depend on solid fuels for cooking, the need for improved cookstoves immediately becomes clear. The room is full of smoke as a woman cooks over a three-stone fire, her children inhaling it as they sit a few feet away.  The smoke inhaled in homes like this is equivalent to two packs of cigarettes per day. For families like this, there is no alternative; breathing in this life-threatening smoke is the only way to eat.

Prakti stoves reduce indoor air pollution by up to 90 percent, allowing the world’s poor to live dramatically cleaner and healthier lives without changing the foods they cook or fuels they use.  To learn more about the positive health impacts our stoves are having around the world, check out the stories on our website.

Everyday, the equivalent of 10 millions of trees are burnt to cook, & more than 4 millions tons of CO2 are released in the atmosphere ! Across the globe, dependence on wood and charcoal for cooking is leading to rapid deforestation. Countries that were once home to thriving forest ecosystems are now turning to deserts, seeing an increased rate of landslides and the disappearance of fertile land.

Women must walk farther and farther each day to gather enough wood to cook, or spend a dramatic portion of their family’s income on fuel brought in from elsewhere. Simultaneously, cooking using these fuels releases black carbon, a major contributor to climate change.

Prakti stoves reduce fuel consumption by up to 70 percent, as well as mitigating harmful emissions like black carbon. We offer wood, charcoal, and biomass briquette stoves to accommodate the needs of different markets and reduce the negative environmental impact of traditional cooking in every region. To learn more about the positive environmental impacts of our stoves, check out the stories on our website.

Women empowerment at the heart of Prakti project

Women bear the brunt of the negative impacts of traditional cooking.  Often forced to gather their own fuel for cooking, they can spend hours each day walking to find wood and carry it home. Cooking over a three stone fire, women inhale harmful smoke equivalent to two packs of cigarettes per day.

Perhaps even more important, however, Prakti empowers women outside the home. By training women to assemble and sell our stoves, we are helping create a new generation of female entrepreneurs. For more information on the ways we are empowering women across the globe, check out the stories on our website.

Amongst the three billion people who rely on solid fuels for cooking, many are forced to spend upto one third of their income purchasing fuel. With continuously disappearing forests and diminishing access to fuel sources, the numbers of those forced to buy their fuel are only increasing. In sub-Saharan Africa alone, charcoal production is a $10 billion industry.

By reducing fuel consumption up to 80 percent, Prakti stoves offer dramatic cost savings to users. Without altering their cooking methods or fuel used, families are able to purchase significantly less wood or charcoal. Institutions like schools, restaurants, and hospitals can similarly save money on wood purchased each month—or, using the same stove, can begin producing their own biomass briquettes from waste and eliminate fuel costs altogether. For more information on how our stoves are creating economic savings for our users, check out the stories on our websites.

Since 2008, Prakti co-designs stoves with cooks in the developing world. We foster user-empathy during the R&D phase to reach a deep understanding of what matters, and what could bring more value into people’s lives. Hence, Prakti continuously involves users and their communities in designing, testing, refining -and now manufacturing the stoves.

Through its unique user-centric design methodology, state-of-the-art engineering and rigorous testing, Prakti has developed a broad portfolio of 7 stoves. They have been field tested and very well received by local cooks in India, Nepal, and Haiti; they have improved the lives of their users at the base of the pyramid and have acquired strong field recognition. More than 10 000 stoves have been distributed, which means that every day, around 250 000 meals are cooked using Prakti cook stoves

Through its partnership with SkillMech, Prakti has acquired expertise in stove manufacturing, from rapid prototyping in micro and small batches to full scale industrial production. This in-house capacity allows continuous product improvements, and sustained R&D to address either previously neglected or upcoming cooking needs.

Prakti wants to develop a new cooking stove called the Nano Prakti that would be affordable for the most disadvantaged families.

Ovens developed so far are mainly bought by small streets merchant or by school canteen, which can afford to acquire them directly or by subscribing to microcredit. But for the majority of families at the base of the social pyramid, these ovens are still too expensive. These families are therefore looking towards very cheap solutions that are less effective, more harmful to their health and that result in additional daily spendings on fuel.

To respond to this problem, Prakti wants to develop a new oven. The objective is to cut the production cost by half, while maintaining a high added value! Engineers, machines, tools ... Prakti has all the necessary means to solve this challenge. It only needs your financial support to implement this idea and improve lives of millions of people.

How are we gonna use this money:

We are looking for funding to develop two models of ovens, prototype them, test them in laboratory and in the field.

We will test their compliance with international standards through a state independent laboratory (Indian Institute of Technology, Delhi). The prototypes will be sent to be tested on the field by users living in refugee camps or slums in Haiti and in the Democratic Republic of Congo. Cooking accessories associated with ovens will be designed and produced in small quantities.

The table below shows the main expenditures (in euros):

The Happiness of contributing to our fabulous project!

PRAKTI HERO PACK # 1: The Happiness of contributing to this wonderful project + Your name on the greetings page + Your subscription to our newsletter to follow the progress of the project.

Prakti HERO PACK # 2: The previous pack (Happiness, Thanks, Newsletter) + An invitation to the "Prakti Disco Barbecue", a festive and unique evening to cook on Prakti barbecue oven & celebrate the launching of our project!

Prakti HERO PACK # 3: The previous pack (Happiness, Thanks, Newsletter, PraktiDiscoBarbecue) + 1 raffle ticket 'to win a trip* to Pondicherry to meet the team Prakti ticket and discovering their fantastic work on the ground in Auroville! * The carbon emissions of the flight will be offset through CO2 solidarity program (http://www.co2solidaire.org/)

SPECIAL GOURMET PACK # 1 - 3 secret recipes of Govindamal, the out-standing cook of Prakti, and spices to cook them to the wonder + one object of the smart cook range edited by Prakti plus the pack Prakti Hero # 3 ! This pack is also available as a gift, so you can offer it to the person of your choice!

SPECIAL PACK "ADOPT A PRAKTI" : The pack Prakti Hero 5 (Happiness, Thanks, Newsletter, PraktiDiscoBarbecue, handwritten postcard, 1 raffle ticket, Secret Recipe, a signed poster) + One Prakti cook-stove sent to you, for your barbecues with friends. This pack is also available as a gift, so you can offer it to the person of your choice!

CHANGEMAKER SPECIAL PACK # 1 : One Master Class with Mouhsine Serrar, founder and CEO of Prakti on the theme of your choice + the pack Prakti Hero # 3 ! Warning: this package is in limited edition :)

DESIGN PACK # 1 : Receive a Prakti cook-stove, a special monitoring of the project and some exclusive photos of prototypes, in addition with the pack Prakti Hero # 3 .

SPECIAL GOURMET PACK # 2 : Gourmet Pack # 1 + a cooking master class with incredible Govindamal, the outstanding cook of Prakti, on the Indian recipe of your choice! This pack is also available as a gift, so you can offer it to the person of your choice!

SPECIAL GOURMET PACK # 3 - Gourmet Pack # 2 + full range of smart cook objects edited by Prakti. This pack is also available as a gift, so you can offer it to the person of your choice!

PRAKTI SUPER HERO PACK # 2: Design Pack # 1 + The opportunity to give a name to one of the prototype, whose photo will be posted on our website! Warning: pack in limited edition.

PRAKTI SUPER HERO PACK # 2: a flight ticket (carbon offset) to meet the team Prakti in Pondicherry for a week, with two nights at the Mango Hill Hotel!