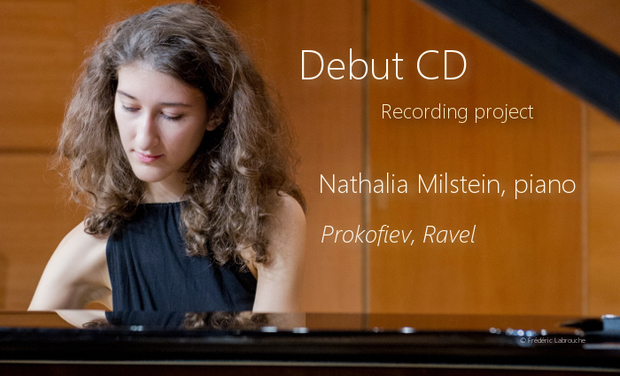 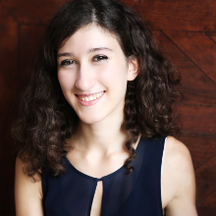 Recording a debut CD is one of the most important steps in a musician's life. It does not only help to promote the artist in their early career, but it is a way of giving them the liberty of exploring the musical world they feel closest to in their musical development.

With this ambition I created the programme for my first CD! I was born in France into a family of Russian musicians; my parents emigrated from the USSR to France just before the former regime collapsed, in 1991. As a result I had the incredible chance to grow up benefiting from both Russian and French cultures, and it was more than obvious for me that I should combine these two aspects in my first recording - I have therefore chosen two genius composers from these two countries: Serguei Prokofiev (1891-1953) and Maurice Ravel (1875-1937).

I started the piano at four, having my first lessons with my father. From my childhood I was immediately attracted by the very special musical world of Serguei Prokofiev, full of images, wild and marvellous characters. The impressionistic world of Ravel, which drives us in the furthest layers of our dreams but is yet so pure and deeply touching, also always fascinated me greatly.

In the beginning of the 20th century, two major events deeply transformed Europe and its citizens - the First World War and the Russian Revolution. All the artists living at that time were profoundly touched by these events and could not but express it through their art. Ravel, who was not able himself to be at the front, watched his closest friends being wounded and die. Thus, the Tombeau de Couperin, finished in 1917, is composed of 6 pieces and each one is dedicated to a fallen friend.

At the same time, Prokofiev finished his Fourth Sonata op.29, which is also dedicated to the memory of a dear friend who committed suicide a few years before, Maximilian Schmidthof. Difficult to say whether the music would be the same if Prokofiev wasn't obliged at that moment to move to the United States because of the reigning chaos in his country.

Here is an extract from the magnificent 2nd movement of the Sonata (live recording).

Finally, what unites the two composers is what is called now their "neo-classical" approach to the composition. Ravel assumes it totally by paying tribute to the 18th century French composer François Couperin and using the baroque form of a dance suite.

Prokofiev uses the traditional classical sonata form in three movements. But as he was still a student in Saint Petersburg, he tries his hand at composing miniatures recalling of the baroque, classical and romantic periods - it results in a set of 10 pieces for piano op.12 where you can find, side by side, a Rigaudon, a Mazurka and a Scherzo, among others! The process is much less reflected than Ravel's, for he gathers this little pieces under one opus despite the fact they were not supposed to be a cycle as he composed them mostly for his friends between 1908 and 1913.

Therefore it is most interesting to compare these pieces, to which I will add his wild Toccata op.11, in stark contrast to Ravel's intellectual approach. This CD will contain two Preludes, two Rigaudons and two Toccatas! With this quite special, composed of the most beautiful masterpieces programme, I hope to give a first portrait of my own musical personality!

If you wish to have an overview of my career path, to follow my news and concert agenda or have the possibility to hear some extracts of my playing, I invite you to look at my website www.nathaliamilstein.com

With who and where?

I will have the great pleasure and honour to record it in the best possible conditions for such a project: the Grammy award winning "Classical Producer of the year" Michael Fine, former Vice President of Artists & Repertoire at the very renowned label Deutsche Grammophon will lead the recording sessions, joined by Wolf-Dieter Karwatky, seven times nominated for the Grammy award; both have worked with the most eminent classical artists and orchestras of the last decades. For more information: www.finesoundproductions.com

The recording itself will take place in the magnificent Beethovensaal in Hannover, internationally praised for its beautiful acoustics and I will also have the possibility of choosing a piano among those proposed by Gerd Finkenstein, one of the finest piano masters in Europe!

But to make it all possible, I need your support!

The collected funds will allow to cover the rental of the hall (2000€), the rental, transport and tuning of the piano (3000€) as well as the extra costs - travel and hotel for me, Michael Fine and Wolf-Dieter Karwatky, hard disks, transport of the recording equipment (2000€), all for the duration of the project, four days in total.

The recording itself will be made in September 2016, while the CD release is scheduled for 2017.

Please feel free to share this page and thank you in advance!

A huge thank you!!

A huge thank you as well as the CD as soon as it comes out!

A huge thank you as well as a signed CD as soon as it comes out!

A huge thank you, your name will be printed in the CD booklet if you wish so and you will receive 2 signed CDs!

A huge thank you, 2 CDs, your name in the CD booklet as well as one invitation to any concert announced on my website's agenda page www.nathaliamilstein.com (if you wish, you will be also informed about the upcoming concerts by email) !

A huge thank you, 2 CDs, your name in the CD booklet as well as 2 invitations to any concert announced on my website's agenda page www.nathaliamilstein.com !

Previously mentioned rewards as well as a free private recital at your home, with works recorded on the CD or other composers (travel costs not incl.) !