Inoutput, in collaboration with La MaMa Umbria International, launches “Ni una más”, a new theatre project around feminicide and violence against women, with a company as international as ever! Please support us in making it come to life! http://inoutmas.wordpress.com 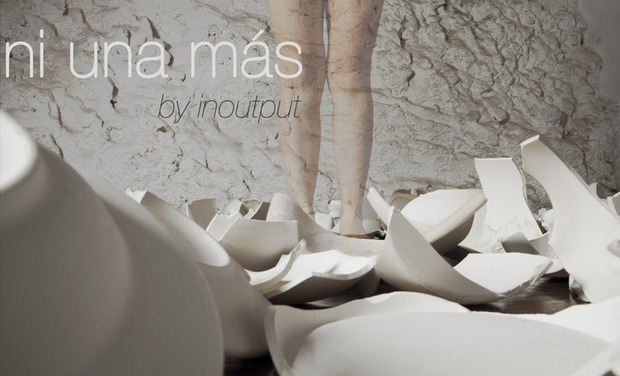 Stirred by the text written by Mia Parissi, director Nerina Cocchi and photographer Andrea Messana, based between Paris and Brussels and producers of the participative performance POST•M and of the exhbition "Studio#01" of Fotografia Europea Off 2012, have gathered in this past year an international team of incredibly talented artists to explore this theme: actress Giovanna Scardoni from Verona (Italy), (check her out in "l'Européenne" by David Lescot at the Théâtre de la Ville in Paris), costume designer Giulia Pecorari from London, video artist Daniel Pinheiro from Porto and composer Davide Fensi from Vaglia (Italy). Currently in residence at La MaMa Umbria International in Spoleto, Italian residence of Ellen Stewart of the historical La MaMa E.T.C. of New York City, for a three-week period, we invite you to take part in the production of a performance which is a voice rising from the collective confusion, from the guts of human sensations and wanting to provoke an informed and pertinent dialogue.

With the help and guidance of Dr., and friend, Benedetta Guerrini degl’Innocenti, Italian psychoanalyst specialized in physical and psychological violence amongst couples, we use the tools of our art to touch as possible and not leave any doubt around the necessity of this dialogue.

In this three-week residency, we dive into the exploration of the text and articulate, through Giovanna’s scenic presence and subtleness, Giulia’s sculptural costumes, Davide’s music and Daniel’s video set design, how to represent this necessary journey. Furthermore, Daniel and Nerina, from the end of October through the beginning of November, will travel across Italy, hosted by friends and family, to interview people on the streets and other public places about violence against women and integrate their voices within the performance.

This is how we create a performance about bones cracking in our society. Of green eyes, in other words of that beauty of the human spirit that animates each and every one of us, if only we learned to look at ourselves as what we are instead of what we would like to be. Of trees, branches, roots that we keep on walking on, without realizing the stability that they could offer us.

Mia Parissi was born in Florence (Italy) in August 1978. Twenty-five years later, passing from Barcelona, she settles in Lombardy (Northern Italy) where she works, reads and writes. She has two autoproduced publications: the novel VA:LE (2007) and the illustrated short story collection “Il tarlo ippopotamo e altri racconti a miccia corta” (2011).

A graduate of the United World Colleges (Waterford Kamhlaba, Swaziland) and of Middlebury College in the US, Nerina has been exploring for some years the concepts of victim, perpetrator and responsibility through academic studies, theatre and physical improvisation.

Actress, singer and dramaturg with a special dedication for the feminine world, Giovanna starts her career at the Piccolo Teatro in Milan, performing on some of the most important Italian and world stages. She has collaborated, most notably, with Luca Ronconi, Franco Zeffirelli, Matthias Langhoff and David Lescot, with whom she held her debut at the Théâtre de la Ville de Paris in “L’Européenne”.

Giulia graduated from the MA Costume Design at London College of Fashion, (London, UK) and from the BA Pattern Making at Polimoda, (Florence, IT). She has been working as a freelance costume designer, costume maker and assistant for several dance/theatre companies and film productions in Italy (Compagnia Virgilio Sieni), UK (Karla Shacklock) and Netherlands (Lucie Petrusova from T.R.A.S.H.).

Her work is a constant experimentation of materials and techniques in order to create unique sculptural shapes for her costumes. Her field of research is the relationship between the performer’s movement and the costume.

Photographer for art and performance, Andrea lives in Paris where he works at l’Opéra National, and alternates his activity as photographer to one as professor for some Italian institutes such as IED Milano and LABA. Since always, he is invested in creating mixes and contaminations between artistic disciplines.

Born in Venezuela, Daniel lives and works in Portugal where he graduated in Theater in 2008. Works as a video-editor, copy-editor, performer, multimedia artist both in individual and collaboration works. He highlights his work as a video-artist, where he develops works exhibited internationally. In 2011 was selected to be part of the Portuguese Internship Program INOV-ART, working as an intern and resident artist at CultureHub, Inc.

These 11 000€ that we are raising are the strict minimum to make this project happen in the most ethical way.

About 2000€ cover the travels of us seven artists as we move from our cities (Paris, Brussels, London, Verona, Porto, Torba, Vaglia) to Spoleto and back, other travels for the construction of set and costume, the travels of Daniel and Nerina as they move through Italian cities for the interviews which will become a part of the show, and other travels for our first dates. This sum includes plane, train and bus tickets, gas, tolls.

About 1500€ cover our food expenses for seven people for our three-week residency, and for Daniel and Nerina during their travels.

About 4500€ cover the salary and social contributions of Giovanna (actress), Giulia (costume-set designer), a techie and a part of Daniel’s (video artist).

About 2450€ cover the costs of production of the show (rehearsal materials, materials for the creation of video-photographic set and costume, original music creation, props, make-up …). This sum includes a first half of the salary and contributions of Daniel (our video creator), Andrea (our photographer) and Giovanna Bernetti (our graphic designer), as well as the whole remuneration of the musicians in charge of the creation of the original score for this performance.

Whatever extra, will be used to pay Andrea as photographer and Nerina as director, and both as producers. In the wonderful eventuality your generosity might bring us even more, we will invest that in travel for as many dates as possible in all of Europe.

In addition to our never ending gratitude, we propose gadgets, services and learning opportunities in exchange for your contributions!

your name in the “Special thanks” section of our website

translation of a 1500 character page from English, Italian or French into any of those three languages. The offer can be cumulative (eg: you need 3 pages to be translated? You offer 60€!)

A DVD of the show + All of the above

a signed poster of the show + All of the above

5(3h each) private lessons of Photography 101 (digital or analog, your choice)

7(1h30 each) private lessons of French/Italian/English

A weekend for 2 people in London, hosted by Giulia Pecorari.

A weekend for 2 people in Verona, hosted by Giovanna Scardoni, including a guided tour of the city with native Giovanna

A photo reportage of a performance or a workshop

A 5-day workshop in Photography (22h) for 2 people, choice between: Performance Photography; From analog to digital; Photography 101

A 4-day video workshop (16h) for 6 people: Live streaming performance: how to create a show in live streaming through improvisation on text and body. Workshop in telepresence from Portugal to anywhere you are!

A 3-day theatre workshop (21h) for 6 people, a choice between: “From classic to contemporary” theatre; study and interpretation of anglosaxon authors (Timberlake Wertembake e Sarah Ruhl) in either English, Italian or French; Improvisation; how to liberate your creativity through Authentic Movement and automatic writing.

theatre, photography or video workshop + a printed image (in limited copies) of the performance.

a performance of the show at home or at a place of your choice (not for theatres, only for individuals in Europe)

for schools and educational institutes in Italy, a day of workshop* for classes of max. 30 students and show (max. 90 students). *the day of workshop will be determined in collaboration with the interested Institutes and Professors.