Enrolled at EICAR (film school in Paris), in the end of June I will shoot Blessed Days. I joined KissKissBankBank to ask for your help!! 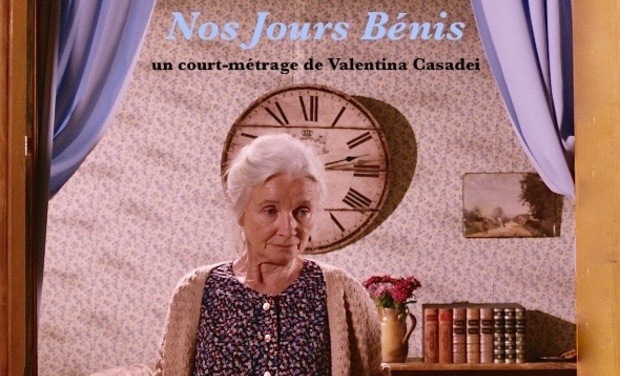 Adèle, an 85 years old lady, confronts very hardly the loss of her husband, after 63 years of shared life. An unexpected dream, will bring Adele to relive the last moments of their life together, at the museum. She will be able to overcome the pain.

WHO IS THE STORY ABOUT?

The story is about Adèle, an 85 year old woman, whose husband dies. Adèle is an old lady but with a lot of energy, she is well-educated, a retired literature teacher. She is a strong woman, she likes to control things around her.

Victor, her husband, is a quiet and docile person. He doesn’t like to make any decisions, in fact he has little initiative but a great adaptability. He is a retired history teacher, good and gentle with his students. That’s one of the many things Adèle loved about him.

Alice, their daughter, is the third important character in the story. She’s an introverted and resolute woman in her fifties. She controls her emotions very well and tends to take care of others before herself. That’s why, suffering for her father's death, she takes care of her mother instead of consoling herself. What Adele wants is her husband back. And through her daughter’s moral support and a journey in her own memories, she’ll be able to understand that having Victor back is impossible and that the only solution is the conscious and serene acceptance of what happened. She is a relatable victim of life, because we all have the same ultimate destination. To accept her husband’s death is to accept her own fate at the same time. This is the heart of the story. The story is structured in two major parts: present and past. In the present Adèle, the main character, with her daughter’s help, has to deal with her husband’s loss. In the past, what the characters want, unconsciously, is to feel alive again.

They find themselves in a painting and they become eternal because art has no time.

WHY I WANT TO TELL THIS STORY?

I want to tell this story, Blessed Days, because it belongs to me. It belongs to my experience at the museum, which has led me to write this script. Every Saturday and Sunday from September until February, I have worked at the Petit Palais as a surveillance agent and I was lucky enough to observe people 10 hours a week, with their neuroses, their imperfections, that make them unique beings. As a silent spectator, I have stored contemplative glances, watchful eyes, moments of sharing and moments of solitude. All that I have experienced at the museum has enriched my awareness of this story. The endless catalogue of the people I have met has allowed me to build a whole world around my characters and to understand the profound meaning behind every little detail of this story. I want to tell this story because everyone has lived it or might live it. I want to exorcise the loss and to praise good feelings as protectors. One Sunday afternoon, I was supervising one room (paintings of the twentieth century). An elderly couple, hand in hand, walked in front of me. I looked at them and I gently greeted them as they were going through the whole exhibit. After a few minutes they came back to the entrance, focused on their walk, and they went out. Shortly after they came back and traced the same path. And so on, back and forth, the same path, with their heads down, as if it were a sport. I started to wonder. Who were they? What were they experiencing? Why had they chosen this place not for the value that it has but with another purpose? Why did they look down and not around? There were so many beautiful paintings ... Back and forth. Then they never returned. I waited for them but I had to give into the thought that they had left me. Their absence, combined with their old age, their clumsy and lame walk, made me think about death. That's why Victor dies in my story.

The plot tells the life of a couple, walking into the museum, who arrives in front of a framework which they identify themselves in.

The painting in question is called "The Sodoma Angels" by Gustave Moreau.

The transmigration of bodies (mortality condition) into a piece of art, frozen in time (eternity condition), points out a fear in the characters, Victor and Adèle, against the passing of time and the transience of life. I believe that the comparison between time and art is praised perfectly by the poet John Keats in his "Ode On A Grecian Urn”.

“...When old age shall this generation waste, Thou shalt remain, in midst of other woe Than ours, a friend to man, to whom thou say’st,

– that is all Ye know on earth, and all ye need to know.”

- Love when it approaches death.

The genre is drama. This story depends on the emotional and relational evolution of Adèle. There’s a human struggle.

The main narrative questions of the story are the following:

-  What are the final steps that Adele has to pass to move on from her husband's mourning?

-  What’s the meaning of the painting?

-  Why Adele decides to go back to the museum?

-  What leads Adele to peacefully accept her husband’s death?

colorist and all my crew, two completely different worlds for the past and for the present. For the present, to describe the sense of claustrophobia and to trap the protagonist in her condition of impotence, I will use close ups and, depending on the location found, with the help of my director of photography, I will choose to "entrap" the main character, Adèle. Regarding the museum, we’ll use long shots to represent a majesty that emphasizes human littleness in front of nature.

Adèle, as this old man, has to deal with her life partner’s death. Sadness, inertia and memory.

Adèle, as Madge, as no strength. And she stays in bed.

Victor and Adèle, as the characters in Amour, form an intellectual couple. They are passionate about culture, arts, literature. Sweet, loving and deeply connected.

Pursuing a visual continuity and looking for the right and appropriate language to tell this story will be what I will handle with the DOP.

MOOD BOOK OF THE SHORT FILM

If we receive more than 2000 euro, your support will be very useful as regard the post production of the film and the ability to make "Nos Jours Bénis" participate to festivals around the world.

The funds raised will be transferred to the bank account of the director, Valentina Casadei.

The crew thanks you for having helped us!

The crew thanks you for having helped us and will keep you informed of all the news about the project.

The crew thanks you for having helped us and will keep you informed of all the news about the project. You will also receive all the photos made on set!

The crew thanks you for having helped us and will keep you informed of all the news about the project. You will also receive photos made on set and a poster A3 of the short film !

You'll receive an A3 poster of the film and you'ill appear in the credits of the film.

You'll appear in the credits as producers of the film. You'll receive an invitation, in september, for the presentation of the film!

Thank you! We will shoot a video clip with an actor of this short film and you!

THANK YOU FROM THE DEEP OF OUR HEART! You're part of the team!