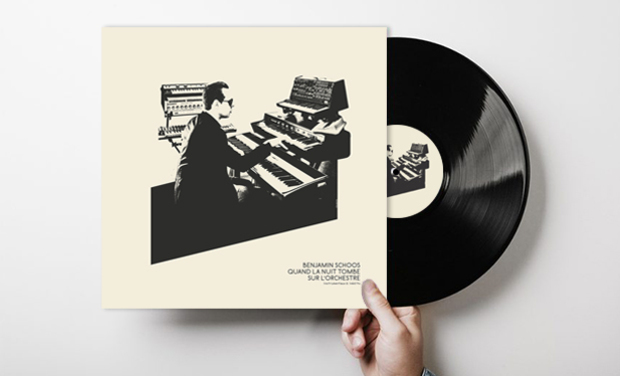 Step inside the curious hinterland of Benjamin Schoos’ imagination. Repair to the drawing room and luxuriate in his most outlandish compositions.

Quand la nuit tombe sur l'orchestre is a collection of 15 mostly instrumental tracks that would all be monstrous hits in a parallel universe better than our own. With the titular inspiration coming from a quote by the surrealist commander-in-chief André Breton (“when night falls on the orchestra”), the Belgian musician has gathered together some of his finest instrumental works and rarities for this fascinating and phantasmagoric album.

Quand la nuit tombe sur l'orchestre has been brought together from the archives of Belgian cult record company Freaksville - the Brussels and Liege based label Schoos runs - with many of the tracks here recorded for films and TV documentaries. Like the hegemonic Breton, Schoos presides over a creative hub, assisting and being assisted in making some of Belgium’s finest underground music. That’s the dayjob at least, while at night the freaks come out to play.

And like the surrealists, there’s a list of players bringing surreality to the universe. As well as Schoos on analog keyboards and synthesi- zers, piano, organ, mellotron, vocoder, drums and percussion, guitars and bass, the album boasts a cast of many, including: Man From Uranus, Jerome Danthinne, Christophe Cerri, Sabino Orsini, Yoni Vidal and Jean-François Hustin.

And what’s more there’s a special guest appearance from Alain Chamfort - a Breton born musician of note who over the years has collaborated with Jacques Dutronc, Serge Gainsbourg and Claude Francois, amongst others - unleashing his formidable sprechgesang on ‘Dans les bras de la nuit’.

Step inside this curious hinterland and prepare to be bedazzled.

digital format of your choice.

Digital format of your choice.

All the vinyl published and produced by Freaksville Records + albums download codes.