To boost my performance and garantee free mouvement in my horses shoulders help me to buy the latest technology saddle... 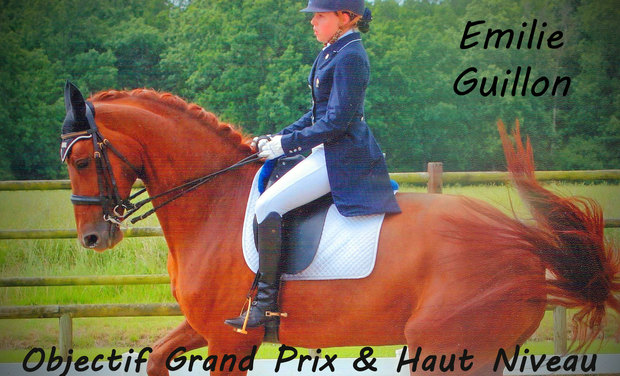 Moving towards the European Championships and the Olympic Games........Every day my dream comes closer !

Coucou, my name is Emilie Guillon, I am 22 years old and I am a dressage rider. My goal this year is to compete in my first Grand Prix level competitions in my favorite sport, dressage, with my 11 year old mare Rose Thé.  Grand Prix corresponds to the highest level in dressage competitions and in France they also call it "Pro Elite". The ultimate goal is to participate in the Olympic Games.

I am lucky to have a solid experience of competing because I have already participated in the biggest French and International competitions, and represented France in the European Championships for the under 22s.

The sport/art of dressage consists in riding your horse in a 60 x 20m rectangle to show off the elegance of it's movements and the complicity with the rider, in imposed or free movements. In the Kur, the music, the choreography give this discipline a real artistic sense where the horse seems to danse in rythm to the music in answer to invisible aids from the rider.

But while my mare offers me a bit more every day and my technique is improving outstandingly, my saddle is about to break. What is a saddle ?  It is the tool that allows you to unite with your horse. Every tiny signal when riding is very light and a bad saddle does not permit the horse to correctly understand the rider's subtle indications. A saddle must absolutly not hamper the horse's mouvements, on the contrary, it should allow a maximum of comfort and freedom.

With a good saddle my dream comes true !   With your help the adventure continues !

Horsemanship,  the relationship between horse and rider evolves !

The noble art of riding....  Who would have thought that 2 living creatures would join together to become one ?  So different but so close.  Man and horse, a story of friendship and generosity which has lasted for centuries.

Horsemanship has greatly evolved since it disappeared from the army and agriculture, and became a pastime. In 1900 horseriding became an olympic sport and since then has become more complex, technical and precise.

Germany is the country that has won the most dressage medals since the introduction of dressage as an olympic sport. They do this through training and the best tack possible.

So it seems sensible to wish for a german saddle made by Passier & Sohn, leaders in the making of saddles since 1867.  Lately Passier has presented their "Sirius" saddle with the "FRT system" for complete freedom of the horses shoulder.

The "FRT system" what is it ? It is a new design allowing the horse's shoulder to move as freely as possible by creating a tree which offers the neccessary space for the rotation of the shoulder.

The best riders worldwide ride with this saddle.

At the prize giving in the international competition in Pompadour. 2014.

At the international competition in Saumur, with my second mare Vallota S.

The funs raised by this campaign will enable this project to come to life and will support the cost of the  "sirius" saddle.  Any extra will go towards the welfare of Rose Thé.  ( the vet, shoeing, the physotherapist etc...)

Thank-you for you time and support.