Help us to launch a unique musical experience ! 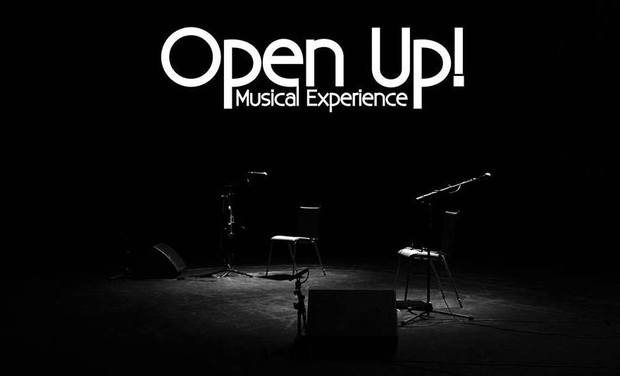 We have decided to throw a party-show called Open Up !. It would consist of a musical experience that aims at opening up people in discovering new styles of music that they don’t know about and at getting their interest in live music.

The program of our party-show will be eclectic. We would schedule local independent artists with different styles. The audience would have the opportunity to discover different music genres in a few time. Yet, no timetable will be announced and the chain of bands playing would only be known on the day of the show.

A few multimedia animations will be set up. These will be free of use and will handle the topic of experience and musical diversity.

For the first edition of this project, we chose four different artists: a rock band, a hardcore band, a jazz and and a hiphop artist.

The show will take place on Thursday 29 October at Atelier 210. Atelier 210 is a multidisciplinary cultural place for performing arts in which our musical experience would perfectly fit in. Indeed, Atelier 210 gigs are known to be like “a playground for artists who are free to invest the space and develop their own musical universe without any restrictions.”

A lot of live music professionals agree that audience is not really likely to see artists they don’t know. For example, festivalgoers are not quite motivated to leave the camping and see emerging bands at noon and we can observe very few people going to see artists that are not so popular. A lot of young people are not so curious about discovering new kinds of music, especially at the time when music is everywhere and we could easily be satisfied by launching a playlist on Spotify.

Our goal is to draw young people’s musical curiosity, stimulate them to listen to music with greater attention and less superficially. We would like people to be more interested in discovering less publicized artists (or at least artists they do not know), to be more opened to other styles of music and to get rid of their prejudices about certain genres of music and open themselves to the musical unknown and diversity.

Also, we would like to awake young people’s interest in going to concert venues, to show them how a gig could be a whole new other music experience than their headphones or screen at home. It should also be an other way to expose them to music discoveries and to identify new artists. It is as well more likely to live emotions, and question your personal opinion about an artist or a music style, while living a collective experience than staying alone in front of a screen.

As part of our end-of-course project, we decided to propose this concept of event and animation. We all 3 are student at IHECS, MA2. We already had the occasion to organize projects, cultural events and concerts, during our studies as with passion in our private lives. We acquired multimedia skills too (web, video, photography, sound) and those will be very useful for this project.

My parents had very different tastes in music. I grew up with Latin music and punk rock from the seventies. As many young people, I started developing my own musical tastes and was influenced by my relatives. I am always looking for something new, for diversity and for artists that are at a musical crossroad. That way, I go to concert halls, which are the best places to discover new artists with loads of surprises. I hope that this kind of project will allow young people to open up to new styles they ignore, be surprised and stimulate their curiosity.

I grew up with musicians and music lovers and so it is impossible not to love music. From adolescence onwards, I developed my own tastes and discovered quite marginal musical styles. These discoveries led to a sad realization: I can’t share my passion with classmates because they all like artists on the radio. At 22 years old, after having the possibility to improve myself on many ways, especially in culture, this project will allow me to show the power of music to people that are not so interested in it. I am more than motivated to convince them to my religion: the love of Sound!

I’ve always been passionate about music. I’m persuaded that musical diversity is essential to personal development. Thanks to my parents, I quickly headed to rock concerts but I also listen to a whole range of kinds of music. Each discovery makes me more curious. The current digital era allows us to broaden the musical diversity. Nevertheless, many think music is only about a single or a band that is so cliché. For this reason, I think we should open young people’s eyes to the great musical opportunities around them.

We hope to collect a total amount of 1800€ in order to cover the following expenses:

Artistic production: no artists without money. No artist, no gig. No gig, no gig!

SABAM: the holding of a concert involves, of course, fees for copyrights.

Communication: The promotion of the event is necessary (posters, fliers, website…). The website will also remain in use on the long term, so that mutilmedia devices can be re-used for other events.

Development: The fees will ensure the continuity of the project.

Catering: We sure have to feed the beasts!

KissKissBankBank fees: 8% of the total fundraising

The entry ticket on presale costs 8 euros and is 10 euros at the entrance. With this money, we would be able to pay for the rent of the premises. The rent is not included in the 1800 euros total budget.

If, thanks to you, we collect more than what we were hoping, we will use the extra money to cover the project’s animations fees, unexpected costs and to the venue.

...one Justin Bieber's song will be forever forgotten. And we are eternally thankfull for that!

You will receive an official poster of the event, dedicated with love by the artists.

You will receive all the previous rewards + A dinner with our trio (we can even sing, dance and tell jokes)

You will receive all the previous rewards + An unlimited drinks' package for the evening (you've been dreaming about it, we did it!)