Bel Ayre wrote a new album "Entre-temps" and is recording this now! 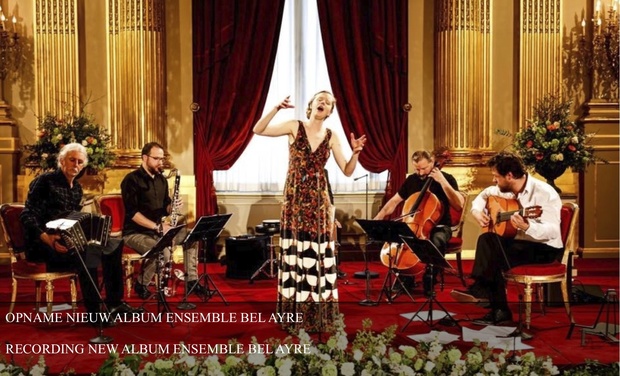 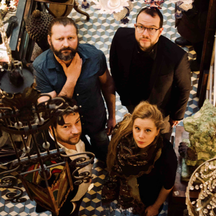 Bel Ayre is the ensemble built around soprano Lieselot De Wilde and jazz guitarist Peter Verhelst. The name Bel Ayre can be understood in many languages as “beautiful song”. The unusual collaboration of the musicians of the ensemble allows versatility. The name suggests the connecting power of music. Bel Ayre's inspiration is boundless and its curiosity reaches to songs and stories coming from all times and places. With its own songs and its creative, refined and generous style the ensemble creates a very personal story and a unique musical universe.

Bel Ayre has developed a very personal and unique interpretation of the Neapolitan song repertoire with its first album A Canzone e Partenope. Now we are making it even more personal with a new album brimming with compositions of our own hand. The album is titled Entre-temps and contains songs in Dutch and French. The music, texts and arrangements are finished and we are ready to record!

Entre-temps can refer to a period or space in the in-between or to a side activity. It also refers to the dorveille. Before the industrial revolution, many people had sleeping habits that differed remarkably from the ones we have today. Due to the fact that they went to bed earlier and they didn't have the sleeping comfort that we know today, it was a common use to spend a part of the night being awake. The period between two stages of sleep came to be called the dorveille.

This dorveille was the ideal time to commit all sorts of clandestine activities, such as love affairs, petty crimes or bacchanals. Another popular occupation was the interpretation of dreams, as they were freshly lingering in the memory. Hence many a writer was inspired during this mysterious dorme-veille.

Entre-temps is a voyage through an imaginary town during the night. Here and there, human activity is noticed and the story zooms in on the occupations of the people. But sleep is always lurking, blurs the perception, and therefore the difference between dreams and reality as well.

An orgue de barbarie (a small, portable barrel organ) guides the nocturnal travelers past secret lovers, praying monks, the lonely writer, the mother that feeds her child, the broken hearted, dream readers, the sneaky charlatan and the trance of the jabbering drunk for whom the dorveille lasts all night.

Hereby a live-version of one of the songs of Entre-temps: Chanson d'amour

If you want your proper copy of the album to be guaranteed, you have the chance to order it at this very moment! You can place your order by contributing to this crowdfunding campaign. When the album is finished, your copy will be sent directly to your address (so don't forget to fill this out!).

There are also other ways to contribute to the realization of the album! We kindly invite you to have a look at the column at the side, which offers suggestions for donations. As you will notice, each donation gets a matching bonus from our behalf. We would like to thank you in advance for your contribution and support!

The fundings will be put on the account of the association of Bel Ayre and will only be used to realize the recording project!

All pictures used on this page are made by Laura D'Halleweyn

Hereby you can find a detailed description of the costs we would like to cover with the crowdfunding campaign. The recording will take 4 days, preceded by rehearsals. After the recording, the CD will be edited and mastered. A new drawing will be designed for the CD cover. Afterwards comes the lay out and pressing of the CD. Release is expected in the beginning of the fall 2019.

Thank you! You can buy our CD later at at reduced price.

Thank you! We will send you our CD.

Thank you! We will send you our CD and an older CD of your choice.

Thank you! We will send you two signed CD's. (*In case the goal of 8000 euros will be exeeded, an example with a unique drawing on the cover will be sent to you)

Thank you! We will send 4 signed CD's and will mention your name in the booklet and on our site. (*In case the goal of 8000 euros will be exeeded, an example with a unique drawing on the cover will be sent to you)

Thank you! We will send you 4 signed CD's, 2 tickets for a concert and will mention your name in the booklet. (*In case the goal of 8000 euros will be exeeded, an example with a unique drawing on the cover will be sent to you)

Thank you! We will send you the same a sponsor gets and Lieselot and Peter will play a private concert. (*In case the goal of 8000 euros will be exeeded, an example with a unique drawing on the cover will be sent to you)