Pre-order the US debut album by pianist and singer Pablo Campos, recorded in New York with Peter & Kenny Washington! 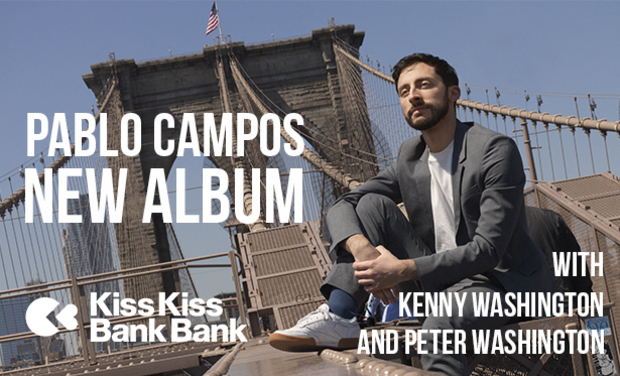 The Label Jazztime Records is proud to present the new project by pianist and singer, Pablo Campos. For his US debut album, Pablo chose to record and mix in New York with two of the jazz scene’s best musicians.

“This project is about making a dream of mine come true: getting inspired from the source and the masters of my craft, and recording with one of the most cohesive and swinging rhythm sections on the planet -- the amazing Kenny and Peter Washington,” Campos said.

“For years, I listened to them extensively in the trios of two of my piano idols, Benny Green and Bill Charlap. When I finally had the chance to meet them in New York, I was bowled over by both their humility toward the tradition of jazz and their eagerness to share their knowledge and experience with younger musicians. Their love for Clark Terry, Betty Carter or Art Blakey spawns captivating anecdotes about the jazz giants they’ve played with. One thing is sure, Kenny & Peter learned from the best, and spending time with them is a wonderful way to stay challenged.”

Why record with American musicians when you have a perfectly good trio in Paris?

“It took me some time to think about the way I wanted to put this project together, but my two very close friends Philip Maniez and Viktor Nyberg - who accompany me in my French trio – have been very supportive. They themselves have played with American musicians (Johnny O’Neal, Kurt Rosenwinkel, Eric Alexander…), and they know the value of learning by making music with people you admire. American musicians have something unique to teach.

Like seeking out how to play tango in Buenos Aires, you’ll definitely find this unique energy and excitement for jazz music in the US. In reaching out to Peter and Kenny, I knew I was getting two experts in my favorite repertoire, the Great American Songbook, that they explored on some of my bedside recordings.”

What can we expect of the repertoire of this album?

“There will be 12 tunes on the album, including 2 original compositions and 10 standards that I arranged for trio or quartet. The two compositions are named after the places I wrote them in NYC.

‘60 East 12th Street’ is the address of the apartment I shared in 2016 with friends, where life was a constant jazz party, and where the idea of the ZOOT Collectif was born (a collective of young jazz musicians in Paris.)

“Washington Heights” is a blues composition I wrote as a feature for Mr Peter Washington’s double bass.

The ten standards I’ve chosen tell a story about my own emotional journey and my passion for the Songbook.  That repertoire is where I thrive, and I ignore the naysayers who think these standards are outdated.

I get so much joy in rearranging those tunes my way, and showing the audience new ways of relating to those stories of love and love lost. In that spirit, the album will be called “People Will Say,” after the tune by Rodgers & Hammerstein (‘Oklahoma!’ 1943).”

What do you take away from this recording experience?

“Spending time with two of my heroes was indeed a amazing journey. When you step into the recording studio with musicians of that caliber, you feel humility and admiration. As the recording went on, I appreciated their savoir-faire as sidemen, their ability to both highlight the arrangements and support my singing and piano playing in an uplifting way. There were a lot of first takes. Seeing Peter & Kenny play live with such a mastery of sound, dynamics and swing pushed me to give my best. I left the studio with the greatest music I’ve been able to record as a leader so far. But I also learnt lessons about elegance and kindness from these two gentlemen of jazz whose encouragement and support mean a lot. I really hope you can help us make that dream come true!”

To contribute to the project, click the button in the upper-right corner of the screen and choose a reward: you can also choose any reward among those available for a lower amount then what you pitched in.

This way, you pre-order the recording and help us produce it at the same time. All contributions are welcome, so please help us get the word out and don't hesitate do share the link of this page with your friends and family on social media. To thank you in advance, here is a sneak peak at some of the music:

Born in NYC in 1958, Kenny grew up with a father who loved jazz music, and brought him to every club in town that allowed children. From those years spent between the Apollo Theater and the Jazz Mobile Festival in Harlem, as well as years working as a disc jokey for a radio station, Kenny garnered quite a unique discographic scolarship. His drumming combines a magnificent sound with an astounding dynamic range: many consider him to be the authority on jazz drums. As any drummer in New York will tell you, ‘when “K-Wash” plays the drums, you listen and learn.’

Peter was born in 1964 in Los Angeles, and has been playing with great musicians from the moment he graduated from Berkeley: with Art Blakey’s Jazz Messengers in 1986, then with jazz legends such as Dizzy Gillespie, Milt Jackson, Benny Golson or Tommy Flanagan. His emphasis on creative, supportive and swinging time-playing, as well as inventive and intelligent soloing, has made him one of the best bass players of today - although you’ll never hear it from him as he’s far too humble.

A special guest on the recording, Australian guitar player Dave Blenkhorn stands out by his adaptability, which allows him to share the bandstand with some of the finest world-class performers (Cecile McLorin Salvant, Harry Allen, Evan Christopher, Lee Konitz…). Aside from his mastery of the instrument, Dave can accompany a singer like no one else. His good vibes have been a key element in the process of making a tight recording session (14 tunes in one day!) smooth sailing.

Just like the musicians, we wanted to feature the gifted professionals who are putting their talent at the service of this recording:

After playing the drums for many years (for example in Charles McPherson’s trio), Michael is now the captain of his own ship, Acoustic Recording Studio in Brooklyn. Besides the superb Steinway grand piano, this studio’s strong point is Michael’s technical and human experience, as well as his musical insight.

Mastering is a key element in the process of technically enhancing the soundscape of an album. After comparing test tracks from different professionals, we chose to work with a sound engineer from Finland, whose mastery of dynamics and stereophonic image is unquestionable. You'll find some of her work on Waudio website. We’re very much looking forward to see through that process, hoping this crowdfunding will make it happen!

Long time associates, Arthur and Pablo started working together in 2014. Since then, Arthur has become one of the most in-demand photographers for jazz musicians in Paris. Pablo now proudly wears the button “I knew Arthur before it was cool.” They spent days together roaming the streets of New York to find the perfect spot for a photoshoot. We are still in the process of choosing the final cover picture, but you can check out Arthur’s work on his website.

Thus far, the music is recorded and mixed. We still have to see through mastering, manufacturing, artwork and promotion. We are basically halfway! Pablo is surrounded by talented professionals, but this project needs your support to come into existence. We count on every jazz lover to help us get the word out and join us on this journey! The money raised will be used for :

- The commission fee from the platform: 480€

The album will be officially released in October or November 2018. You will get the pre-ordered CDs in September! If we exceed our fundraising goal, we’ll be able to proceed to a Vinyl edition of the album, and we’ll emphasize on promotion of the project (PR agent) to make it as visible as possible on an international level and tour in Europe, the US, South America... and the solar system!

Welcome to our team :) even a small contribution will be rewarded with our heartfelt thanks!

You'll get the album delivered straight to your mailbox, a few weeks before its official release! (fall 2018)

You'll have the album delivered to your doorstep, and signed by Pablo himself!

The signed album + your name mentioned as a special contributor in the liner notes of the album!

Previous reward but with 2 invitations to the release concert

The signed album + invitations for 2 + get a private piano or singing lesson if you are a musician OR a date for an extended conversation about the recording of the album, the tunes, and all your questions about jazz! (by Skype or face to face)

The signed album + 2 invitations + the Pablo Campos Trio records on camera a customized version of your favorite jazz standard, and we send it straight to your mailbox!

Signed album + on the occasion of a Pablo Campos Trio concert on the 2018-2019 tour, spend a whole evening with the musicians, hang out backstage with us. Dinner and drinks included ;)

Signed album + 2 invitations + an individual photo print, signed and framed by photographer Arthur Wollenweber (from a selection of pictures from the photoshoot of the album in NYC)

Signed album + The Pablo Campos Trio will come to your living room and perform a concert for you and your friends (Philip Maniez - drums; Viktor Nyberg - bass) (transportation not included if out of Paris)

For your coworkers, friends, family or lovers: 10 signed albums + 10 invitations to the release party + Our special thanks for your contribution in the liner notes of the album + a concert of the Pablo Campos Trio in your living room (Philip Maniez - drums; Viktor Nyberg - bass) (transportation not included if out of Paris)

We organize a special Pablo Campos concert for you, with the original lineup from the album, directly from New York to your living room: Peter Washington (bass), Kenny Washington (drums) and Dave Blenkhorn (guitar).