When four french fellows lulled by rock 'n' Roll afford a U.S.A tour to present their new french tracks and US covers to the Americans. 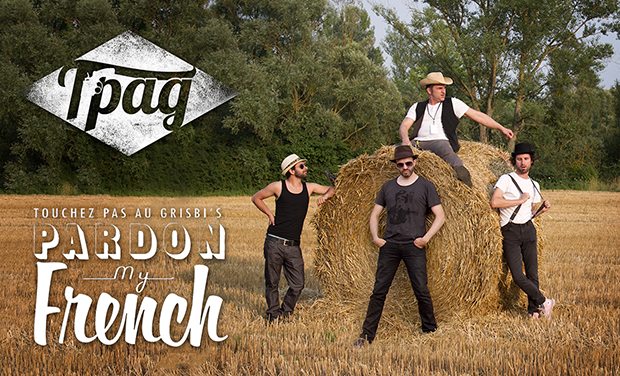 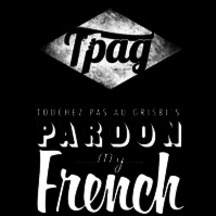 Does that name remind you of the title of an old French gangster movie? It's one reason why these four French guys, lulled by Rock-n-Roll, often appear on stage dressed in gangster suits. Don't worry! Their only weapons are their voices and their music, even if the music explodes off the stage like a gun. They've got rhythm... They've got style... They ditched their polished shoes and hit the road with airplane tickets in hand, a few US dollars in their pocket with plans to kick up their boots in the USA. Don't miss this first American Grisbi Tour!

A LITTLE BIT OF HISTORY…

A few years ago, encircled by the light of a dull bulb above a messy poker table, four musicians were discussing their future... What will become the plans for those fellows lulled by rock n'roll and soul music? Set the stage and the audience on fire with their original songs and American covers full of Grisbi energy!

Thus, Touchez Pas Au Grisbi was born (TPAG... known affectionately by friends) from the experience of those four rowdy guys who have enough zest and madness to ignite the hearts and move the crowds. With a bag full of French lyrics, a solid line-up and that classic vintage sound. Yes Sir !

The "engineer" (Clement Val - bass) and his partner, the "winchman" (Camille Guilleton - drums) are conducting the rhythm section's freight train with a solid handling, covered from time to time by the hoarse voice and the stinging guitar of the "scrap dealer" (Ludovic Grden - vocal, guitarist). This bunch of hoboes can count on the heat of "Double Trigger" (Gilles Marsalet - harmonica) devilish harmonica, to spice the whole  thing up!

From this point, you should warn your daughters as the gang hits the road that this group's recipe has become spicy hot! On stage, these gypsy-looking cowboys, despite their rude boys behavior, are winning the affection of the audience and filling one's eyes with tears of admiration. Today, Touchez Pas Au Grisbi is not just a myth for aficionados. The band grew up and found its very identity, its sound, its groove. One will discover some melody for the girls willing to show off on the dance floor, efficient riffs that move the heart of muscled hairy guys and exquisite lyrics for the book worms at the back of the room.

Prepare for your earth to move, TPAG is on the way!

Can't pronounce the name of the band?

Or just say "The Grisbi Gang" !

After many time spent in basements and studios, an idea is gaining ground. The new EP, mainly in French in the text, is of course influenced by American music and this vintage spirit. It will be called PARDON MY FRENCH. The EP will feature unreleased tracks written for the occasion, and also some songs rearranged. The project was launched, TPAG is on the way again !

After releasing a new EP, it is natural to go with some promoting concerts. Even if the gang can brag that they have performed in some grand concert halls (and there will be more to come), little Parisian Bars, suburban concert halls, even festivals and concerts in the rest of France... The band is thirsty for more and wants to spread its wings. This time, they are taking things into their own hands and are thinking BIG !

So they plan to go and present their work on the land that inspired it. This will be The American Tour!

They will trade in their old suits and shiny shoes for cowboy boots and will be out to discover America with just a few dollars in their pocket. These 4 guys raised by rock and roll will follow their souls and take a musical road trip to the motherland. And They will begin their pilgrimage in Nashville, the home of country music. Yes sir!

They even adapt their names, and give them an American touch. They will become: The Scrap Dealer, The Engineer, The Winchman and Double Trigger, during this journey in the land of their musical spiritual ancestors.

That's one small step for a man…

Remember in 1969 when we sent the first man to the moon? This time they are not asking for the moon, just the USA! They are eager to share some French rock and roll with Grisbi's special flavor. They've even cooked up a special set list including famous US covers for the occasion, to show they are not coming empty handed. Whatever the language, Rock ‘n’ Roll is always Rock ‘n’ Roll !

Nashville, Tulsa, where else… ?

The band will start his adventures in Nashville (TN) and Tulsa (OK) with a string of concerts, recordings in a studio in Nashville and a visit to a local TV show. They would also love to discover  Chicago, New Orleans, Memphis and Las Vegas, depending on how much money they are able to raise to support this project. Please support the band !

Of course, their itinerary with daily events will be updated on the Facebook page, that will allow everyone to follow the adventures of this French band on the road.

The Facebook page: http://www.facebook.com/touchezpasaugrisbi (don't forget to “like” the page to support the band and stay informed of all events)

Some things to know:

Each Euro is important. Any participation, even the smallest, is a step that will take us forward. Nothing will be lost because this first grant is only a part of the budget. At this stage, all members are totally voluntary. The funds are used to cover the costs without any salary.

What is the purpose?

The first objective is to finance a part of airline tickets from Paris. This first step will determine the departure or not of the band to the U.S. because this is what requires the most investment. Everything concerning the completion of the EP will be supported gradually and funded by concerts.

What else must be funded?

A this time, the project (includign posters, photos, flyers, demos) is being fully funded by ourselves. The money raised during concerts will also help to expand the budget. A special benefit concert will be also organized, and a special US tour t-shirt will be printed. However, the project cannot start without your participation. Please support your band and give us a small donation today (see details on the right) !

If the goal is reached:

The band will take off for the U.S. in September or October 2014 for a series of concerts. We are hoping for some help from our networks of friends for small equipment loans, but also rely on sponsors for travel within the U.S. and for equipment rentals (backline).

If the goal is exceeded:

Funds will be put to good use as there are plenty of other steps in the project that require investment.

What are the options?

Deluxe Version € 6000 and more : This is not quite luxury but we may consider to bring a cameraman with us to make a film during our trip. The journey could be extended with concerts in Chicago, New Orleans, and why not Las Vegas... depending on transportation costs.

In addition, regardless of the amount collected, funds will also be used for post production for audio and video media (directing, editing, recording, mixing, mastering...). Nothing will be lost !

Comfort version € 4500 : A slightly more comfortable budget that would allow us to be more flexible on dates. Then we could arrange 1 or 2 recording sessions in Nashville.

Light version € 3500 : This is the minimum we need to complete our budget and prepare our travel bags.

In addition, regardless of the amount collected , funds will also be used for post production for audio and video media ( directing, editing , recording, mixing, mastering...). Expenditure details will be released on the Facebook page as the project progresses.

If the goal is not reached :

American tour will be postponed or cancelled in which case all donations will be fully refunded.

OPTION A : A personal message from the band with our thanks + Your name on the dedicated Facebook page

OPTION F : 1 personnal invitation for a special promotion concert in Paris (other cities and USA, please contact us) + rewards from option E

OPTION H : You become a golden donator. In addition to our eternal gratitude, We will prepare a special gift pack including some bonus + rewards from option G

OPTION I : The band offers a one hour set of acoustic music, totally unplugged, at home or venue of your choice, in Paris & suburbs. Valid until May 2015 (for other places in France or USA, or special request, please contact us) + rewards from option G

OPTION J : The band offers a real electric concert, at home or venue of your choice, in Paris & suburbs. Valid until May 2015 (for other places in France or USA, or special request, please contact us) + rewards from option G