An inquiry, a blog, 200 video clips and a mobile app. Discovering the 4 years of the Great War through today’s landscapes of the frontline 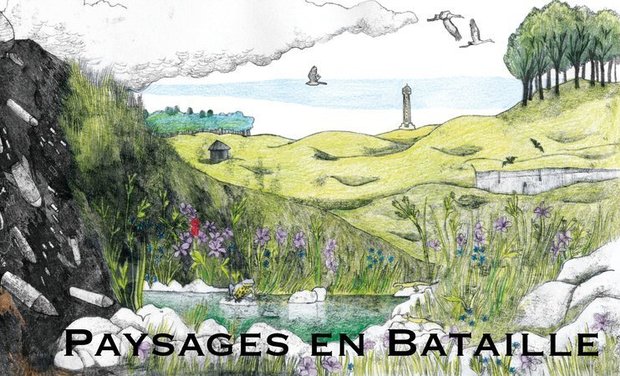 Birth of a project

It all began with a visit to the region of Vauquois, in Argonne. During a family walk with her father – history passionate of the First World War - Isabelle Masson-Loodts, journalist and archaeologist, was struck by the contradictions resonating from the ruins of the site. 25km North-East of Verdun, French and German bombarded the hills from September 1914 to April 1918 and totally destroyed the hills and the village on top of it.

The only remnants of the village are a few stones. The craters that are still apparent give an idea of the violent battles that lasted here for four years.

Like many other battlefields of that period, this site also provides an exceptional view of the region. As geographer Yves Lacoste said: “(…) among the many viewpoints of a landscape, the most beautiful one is the one that provides the best tactical advantage from a military point of view”. From that quote came the idea to investigate the link between the impact of the First World War and Nature.

The project started in 2010 and took the form of a large-scale probe funded by the “Fund for Journalism in the French-speaking community”. This preliminary project went public in November 2012 with a series of 3 double page articles published in the Belgian national newspaper “La Libre”, extended by television coverage in the weekly program “Le Jardin Extraordinaire” on RTBF, supported further by radio coverage on the show Nuwa on the RTBF ‘La Première’ and with the blog www.paysagesenbataille.be .

After these publications, the author kept finding new interesting stories, was encouraged to feed the blog with new articles and was looking to develop more stories on the subject.

A new project surfaced with director Jack Raes. The team decided to expand the use of video clips to uncover not only the visited places, but also to share the memories of the many people that keep these sites alive. The 200 video clips will be put online during the four ‘anniversary years’ of the Great War. They will highlight 200 different landscapes or elements of landscape from the 700 km long front line as it is today.

These videos will be available on www.paysagesenbataille.be and will on our dedicated mobile app. This app will provide additional information on museums locations, special exhibitions, guided tours, tourist offices, local associations, restaurants, accommodations and other attractions.

The 200 video clips will uncover many elements of the present landscape spread over the 700 km of the ancient front line. This means 200 short stories, bits and pieces of history, of the four years of the Great War.

With a length of 1 to 5 minutes, the video clips will be different to what was made already on the subject, thanks to their tone and original approach.

More than a guide, the narrator will take visitors on a real human journey. The purely historical point of view will be complimented with elements of the landscape that will allow the viewer to link the Great War with today’s realities.

The discovery of the ancient front line landscapes will immerse us in a unique set of emotions, misfortunes and strengths that are still very alive today.

How poppies and cornflowers became symbols of wartime remembrance

Hill 60: a man-made mound built for the construction of the railway that became a horrendous battlefield, now a surprising place that mixes history and nature in the extensively farmed and over-built Westhoek...

The Menin Gate: in Ypres, where a ceremony is held every night, revealing the British continuing ardour for wartime remembrance. The episode will explain why local authorities considered leaving the city in state as a witness of war, while the inhabitants wanted it rebuilt.

The Vauthier-stones; punctuating the front line as it was on July 18, 1918, date of the first battle that started the German retreat.

The forts, underground tunnels and bats of Verdun

The stone quarries lying under the battlefield of Confrécourt, and their bas-relief engraved by French soldiers

The forts of Liège, Namur and Antwerp

In Brussels: the monuments symbolising the Great War and the Liberation, and the archives of the Army Museum

The remains of the wartime hospital in the abbey of Valloires

The strange battlefield of Hartmannswillerskopff, in the Vosges Mountains.

The observation post of Montfaucon and the Argonne Landscape

The wounded trees of the Meuse and Argonne forests

A natural boundary: the forest of Haute-Chevauchée

and many other places, trenches, shell holes, cemeteries, monuments, villages and streets...

The look and feel

The blog and the articles were illustrated by the exclusive drawings of artist Fabienne Loodts. Her deep and Nature inspired style renders the atmosphere of the Great War in a way that is accessible to modern audiences.

We decided to call upon her talent again for the opening credits of each video.

The first distribution channel will be the blog www.paysagesenbataille.be. It will be relayed by social networks like Facebook and Twitter to create a wider community like the one we started in 2012 with the original project.

Depending on our partners for this project, other media may be added (website of newspapers /TV stations/other partners).

These videos will also be available through the mobile app “Landscapes at War”.

During the years 2014 to 2018, thousands of people coming from all over the world will visit the former battlefields of the First World War.

Many commemoration ceremonies are already planned.

Countries, regions, French departments, will organize activities during these four years. Local associations and individuals will also participate to this wartime remembrance period. Thanks to our mobile app, visitors will easily access the information available around the visited areas.

A broad audience will be reached by the different information offerings as diverse as history, nature, touristic attractions, etc. The app will be useful to tourists of wartime remembrance, but also to all players of the Wartime commemoration.

As an example, let’s take a visitor on the hill of Vauquois. With just a few clicks, he will be able to watch the video explaining the key historic facts of the site, with less detail than the guided tour, or find the dates and hours of the next guided tours. He will also be able to book his guided tour visit, find the address of the closest museum, when the next ceremony or event will take place or find other good deals like the restaurant down the hill or rooms for rent in the nearby village...

The tab “More” will allow access to other activities in the region like swimming lakes, tree-climbing, etc.

The interface will reflect the modern graphical identity of the project “Landscapes at War.

The key highlights of the project

- the tone: young, modern, polite and dynamic, like when one shares a discovery with friends. It is an invitation to a human expedition rather than a lesson in history.

- the look and feel: although based on the collective psyche of the Great War, and inspired by pictures and witness statements of the period, the modern drawing will reach a broader and younger audience.

- the rallying call: it will gather and highlight the many initiatives around the commemoration of the Great War

Isabelle Masson-Loodts: at the origins of the project, the journalist will also present the videos.

Jack Raes: director, but also cameraman and soundman of the clips, produced with light technical material.

Astrid Dorval: editor and back up to he team on the field. She will also be responsible for the Dutch and English sub-titles of the videos.

Fabienne Loodts: drawing artist. She will realise all the drawings for the blog and the opening- and end-credits of the video clips.

Charlotte Labarbe: computer graphics designer. She will animate the illustrations of Fabienne Loodts for the opening video sequences.

Thanks to the lightweight material used and the logistic support of local partners for the accommodations, the budget for the 200 video clips will be €150,000 (renting of material, logistics and freight costs, make-up and accessories, video shooting, editing, sound track processing, drawings and animation of the credits sequence, computer graphic design, music...

Next to that, an extra amount of €15,000 will be needed for the translation of each language version.

We hope to raise € 10,800 with the support of Kissbankers, which will allow the production to start quickly and put the first 12 videos online before beginning of 2014 (€700 by video clip + €1,600 for the opening credits and translations + 8% (±€800) commission fees for Kisskissbankbank.

Our objective is to draw interest around the videos and convince potential financial partners to co-produce the project. The Kisskissbankbank campaign will also be a good opportunity for us to measure the interest of the public for our project and build social awareness around it.

Any amount above the €10,800 will be used either to rent more sophisticated material for some videos (drone, crane, travelling rails…) or produce additional videos.