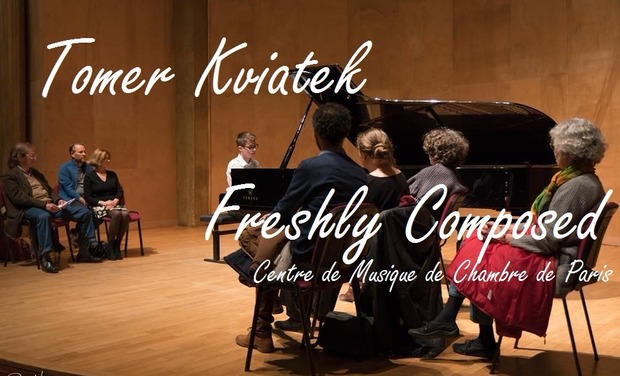 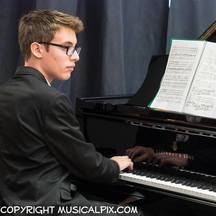 HOW I GOT INTO MUSIC

Ever since kindergarten, I loved playing the xylophone. I've started composing melodies with the 8-keys-instrument. In my grandparents' house, there was an old piano, and every time we visited there, I played my melodies from the xylophone. My parents noticed that I have something special about my playing and asked me if I wanted to take piano lessons. I agreed and started playing a few months later, and I never stopped.

In my first concert, after 6 months of playing, I played 4 pieces, from which one was an original piece of mine. Ever since I started playing, composing has stood beside me as well, I've never stop loving it just as much as interpreting.

In my first recital, after 1 year of playing, I performed a number of original pieces of mine, as well as pieces by other composers.

Ever since 2013, I've been participating in the summer course "Musica Mundi", a chamber music course in Brussels, in which Jerome Pernoo (director of the Chamber Music Center of Paris) has been a teacher at, from 2016.

In 2016, I performed there with my piano quintet, Jerome listened to the performance and was very impressed. A year later, in the 2017 anniversary of the course, he asked me if I had composed more pieces. We sat for a few hours while I played for him pieces of mine. He was truly impressed with my compositions and told me about his center. He told me about the Freshly Composed project and proposed that I will take part in the next season. I immediately thought that it will be a great honor to play my compositions in front of an audience, and agreed to participate. And so, on March 8th, 9th and 10th, I have performed the first movement of my piano sonata, in the Salle Cortot hall in Paris.

Additionally, Jeorme told me about a concert series of the center's third season (2017-2018), "Forbidden for Composer over 16". The program revolves around pieces which were written by composers at the age of 16, such as Mahler Quartet and Mendelssohn Octet. Jerome specified that he had five minutes left in the program, and he wanted me to compose a piece specially for this concert. That was the first time someone has invited a piece of mine, and I was much honored to be asked a thing like that. I agreed on the spot to the invitation, and started forming ideas for a chamber work straight away.

And thus, my Quartet "Dance of the Sacrificial Altar" for piano and strings, is being performed in the Salle Cortot hall in Paris by professional musicians, as part of the program, 9 concerts. That is a real dream come true, and I am so happy Jerome has given me this opportunity.

My next project of composing, is a four-movement piano trio for piano and strings. If I reach my crowdfunding goal, this piece will be sent to be played in the Freshly Composed concert in Salle Cortot on 07/02/2019.

- Plane tickets for Paris and back to Israel.

If we exceed the goal provided and we reach to 2000 euros, I'll be able to compose a violin sonata as well by the end of 2018!

Thank you! The reward is getting a personal "thank you" email.

Thank you! The reward is getting an autographed photo of me with a personal handwritten dedication (also by email).

Thank you! The reward is getting a recording of the trio (by email) after it'll be performed at the concert on 07/02/2019.

Thank you! The reward is getting a PDF file of one of my pieces by email.

Thank you! The reward is receiving a PDF file of the movement I have performed at the Freshly Composed presentation by email.

Thank you! The reward is receiving a PDF file of the trio when it's finished by email.

Thank you! The trio is dedicated to you, your name will be written on the score! And receiving a PDF file of the trio when it's finished by email.