Peter The Great, 300th anniversary with Liège Province and City and Russian authorities. 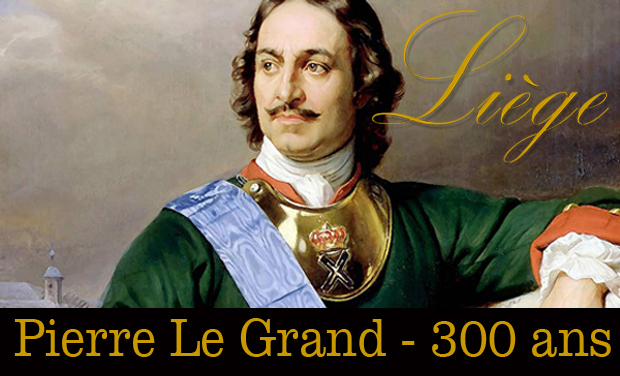 2017 is an important milestone in the history of international relations; it marks the 300th anniversary of closer ties between Europe and Russia, a movement that was started by the most illustrious member of the Russian royal family, the Romanoff's, the first emperor of all Russia, the Tsar Peter the Great. This reformer is responsible for initiating a strong and lasting dialogue between Russia and the West. He also modernized an entire Russian society to create a new political, military, economic and intellectual model that was highly appreciated by Europe. Russian culture was also brought to the fore. Moreover, during his second trip to Europe and his symbolic state visit to the Netherlands, France and Belgium, not only did he strengthen strategic and commercial relations between both parties but he also opened up a new era based on dialogue, cooperation and knowledge sharing of science, culture and art. The aim was to encourage a better understanding in order to progress jointly, thanks to useful and prestigious skills, in line with a new world order. The building blocks for an 'intellectual' Europe both stable and durable were set, thus encouraging peaceful bilateral relations for many centuries to come.

The Foundation of Peter the Great was set up in Liège, a historical town with an impressive past and potential. Considered to be the backbone of Wallonia's economy, and according to Marguerite Yourcenar, this town is a "stepping stone along the mind path" which welcomed the highest dignitary of the Russian empire in June 1717. Full honours were bestowed upon him, with sparkle and magnificence as he made his way to the Baths in Spa before travelling back to St Petersburg, via Aachen and Maastricht, German and Dutch towns located in the current Euro Meuse-Rhine area.

Sir Hervé JAMAR, Governor of the Province of Liège

This ambitious project was also made possible thanks to strong ties with Greater Liège and the town and the province of Liège whose overarching aim was to keep history alive by remembering the spiritual heritage left by our predecessors. Our primary objective is to encourage strong ties and promote a better understanding for all. Let us make this dream come true by sharing knowledge and ideas. Let us take on board the experiences of others and learn from them. This will help open up to greater things and achieve universal progress, to make our world an even better place.

This ambitious project was also made possible thanks to strong ties with Greater Liège and the town and the province of Liège whose overarching aim was to keep history alive by remembering the spiritual heritage left by our predecessors. Our primary objective is to encourage strong ties and promote a better understanding for all.

- Inauguration of the statue of Peter the Great on St. Peter's Square In LIEGE with a musical accompaniment (fanfare especially composed for this purpose by the representatives of the Belgian Air force).

- Official reception with the Provincial and Russian Authorities at the Palace of the Princes Bishops of Liège. Lunch protocol organized by the Governor of the Province of Liège Hervé JAMAR and the Provincial College.

- Transfer to Spa city. The inauguration of the exhibition of Russian modern painters and sculptors "Around Peter the Great and the City of Saint Petersburg" in Spa (Historical Museum of Water city).

- Gala reception organized by the Grand Liège and local authorities. Coach travel for those who wish.

Aperitif in the "Pouhon Pierre le Grand" and meal in the blue lounge of the Casino de Spa. Music animation by Vadim Piankov, folk group Krandash and others.

This commemoration represents the inauguration of the medium and long-term cultural program with Russian and Slavic culture. This initiative is reinforced by the participation and support of SLAVONIC EUROPE, an organization representing the 13 Slavonic countries for a European and international relationship based on the cultural exchange needed for a peaceful relationship.

SEPTEMBER. JAZZ evening followed by the presentation of the program of Peter The Great Foundation and its glass of friendship.

OCTOBER. 1st Russian Film Festival. 2 days devoted to Russian cinema at the rate of 2 sessions a day with a preliminary conference. Cocktail for the festival closing.

DECEMBER. Christmas concert with classical Russian Music. Presentation of the 2017 report and the future program of Peter The Great Foundation, followed by the cocktail.

This fund-raising is for the production and placement of the Peter The Great statue on Saint-Peter Place of Liège.

Balance of 5000 € for administrative & logistic costs. Knowing that 8% are removed from this budget for KKBB and banking services.

Any overrun of the amount requested will be invested in the annual program of Peter The Great Foundation.

The events surrounding this commemoration are entirely financed by the Russian-Belgian authorities and private partners.