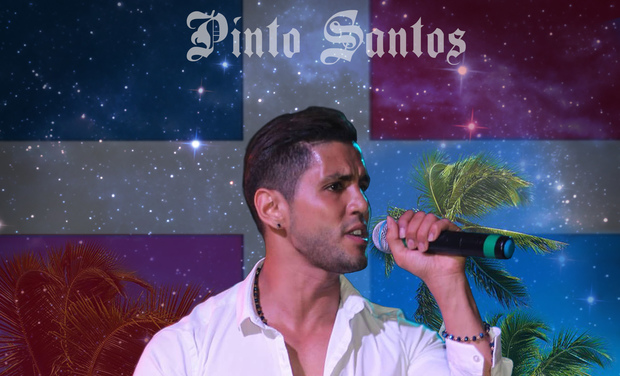 Pinto Santos is a Latin Singer. He was born on the 10th of January of 1991 in Belgium. He is originally a mix of Moroccan and Portuguese background with an ordinary lifestyle.

Early 2017 Pinto competed Top Model Europe and there he reached the finals. Music and singing is his lifestyle and his emotional expression that he brings to the genre Latino (Salsa/merengue mix reggeaton/balada etc…) From there Pinto Santos started to develop his talent further and in the following years, has grown into a true Latin singer in Belgium.

This is an emerging passionate genre that Pinto Santos sings with all his heart! Just now Pinto Santos did his first tour in Brazil in January. As you can see in the movie above, this tour was a succes. However, there were some shortcomings that are necessary for his breakthrough.

After a show people speak to him personally that they really enjoy to the fullest because of the way he perform. We saw that the audience are very impressed how the way Pinto do.

Thats why we share this to give him an opportunity to show his talent.

As you see on the flyer below

Pinto Santos will have a tour in Dominican Republic and we wish to work on our EP from the moment we reach the goal.

To realize that breakthrough and release his first EP accompanied by Video production for his first 'single release' in a real clip on tv channels, Youtube (professional music video), etc.. The costs of this can be high. So far Pinto Santos hasn't had a real chance to release his first EP with a real professional studio behind. We hope to reach this goal to create the best and the most qualitative music productions and entertainments.

Members of the team

Our communication is always be done by Katrien. She also manage all the events and administrations. We also have Jonathan who is a webdesigner and do all updates on the net. The graphic design is created by Makaay. Next to his work he travels together as a road manager.

This time we're going to do it differently, we started this camapgne on KissKiss to let people who love Spanish Latin music re-experience the passion of Latin singing, right from the soul. but the costs are quickly rising...

This combined with finding the right producers for his first album, and also the video production for a high quality youtube video for one of his best future songs that will appear in the new album once the opportunity to finance it when the milestones has been reached.

Furthermore, a documentary/behind the scenes will be made during the production of his EP. and also the EP so you can see how it all works for an upcoming artist. We're going to take a look behind the scenes in the producers' studio and there's also a lot of questions that we're asking, and what it was like to go on tour and how he's been experiencing the last few months and how he also sees the future. This documentaire behind the scenes is something extra that Pinto Santos wants to give his fans and music lovers of the Latin genre. This inspiration comes after Pinto Santos has seen several documentaries of Latin singers.

What can you expect?
To mention it again here are the things we want to achieve with this KissKiss Campaign:

Milestone 3: 10000 EUR professional youtube music video for the best single in the EP:

- The most popular song from the new released album will get a real Music Video.
- Costs include, video crew, script writer, marketing, review process

- We will record extra video & imagery during his performance in the Dominican Republic & we will create behind the scene videos during the recordings of the new EP & youtube video. Aswell with a complex interview.
- Documentary will be around 30 minutes.
- Video production, script writing, review process
- Publishing
- Credits

Every single dollar helps us get close to our dream. You will get personnaly a big thank you on a selfie.

We'll send you a postcard with nice greets from Pinto Santos. You will also get a link for free download our new EP if the milestone 1 is reached.

Invitation to back stage

Meet and greet Pinto Santos. You will get invitation to back stage for the next events. Signed CD and the link of the new EP if the milestone 2 is reached.

Thanks and we're gonna meet soon!

Big thank you! Pinto Santos will take you out for a dinner. Credits on the new video and if it is possible you can join our new videoclip. Signed CD and the link of the new EP if the milestone 2 is reached. T-shirt signed by Pinto Santos.

All previous content + And you will get an invitation for the next events as a VIP guest.