Le Chant du Hibou is not only my first album, but a direct access into my poetic and humoristic northern world. 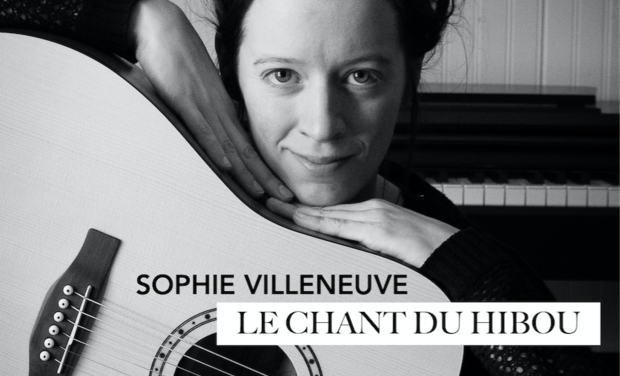 6 days remaining to my crowdfunding !!! Want to know more about what inspired my writing on the album? Visit the wall tent that I was living in last fall which inspired my song "Y Fait Frette" (it's cold as hell!) :)

The studio recording continues!! Today, Marc Tannahill was in the studio to record the banjo and guitar on some of the songs - he did an amazing job!!! Thanks Marc!! Here is a little video of our work on "La Boîte Vocale" :)

My campaign has reached 106%!! Thanks so much!! I encourage people to keep pre-ordering the album - there is still 33 days left to the campaign - even if the objective has been achieved - every dollar will go towards the project. The recording has started, and we already have a few more expenses than expected for some of the songs, so any additionnal contribution will be helpful for me to complete my project! Thanks a lot!

Here's a little video of a song that will be on the album "The Sled Dog Lament" co-written with my partner Nansen Murray :)

My name is Sophie Villeneuve. Born in La Tuque (Quebec), I am an emerging folk singer/songwriter who lives in Whitehorse, Yukon (Canada) since 2013.

Watch my video of my original song Where You Belong to get a taste of my music :) This song has already been recorded in studio through funding from Yukon Governement that I got for a demo in 2016 and is available on my EP on iTunes.

The album will include ten original songs, some in French and some in English. Three songs have already been recorded last fall, and I will record seven new songs.

The project will be recorded in Green Needle Records studios (Jim Holland) in Whitehorse, Yukon. I will sollicitate the participation of numerous Yukon professional musicians like Brigitte Desjardins (drum), Olivier de Colombel (clarinet, saxophone), Marc Tannahill (banjo), Paul Bergman (bass), Jim Holland (guitar) and Renald Jauvin (accordion). I will also borrow Emeraude Dallaire-Robert's graphic designer skills for my CD sleeve, because even though I'm good at putting an owl into music, I am actually pretty bad at drawing one...!

I want the album to bring a fresh wind from the North, but at the same time warming people's hearts. Because that's what we do in the North: when it's cold, we cuddle. This way, it keeps us connected.

It will remain a folk, very acoustic vibe. Some up beat happy songs that will make you laugh, but also some that may leave you sad and make you want to curl in a ball or nest with a little fleece blanket (love fleece blankets..). Because that's how life is, right? Some good days, some bad ones, and hopefully more good than bad ones :)

Talking aboug songs that will make you laugh, here's one that will be recorded on the album, La Boîte Vocale. It relates the story of somebody who gets her date cancelled in her voicemail, and loses her mind. Imagine adding to the two guitars a stand up bass, a drum and a clarinet...!

When can we expect my northern universe to open its doors? Well, I would really like to say January 2018. This is conditional to the success of this campaign. I have had much fun at making a creative rewards list for you guys, so you can get interested things in return for your financial contribution. This way, we both win :)

Any support counts - whether it is by buying a reward or by sharing my campaign on social media or sending it to a friend.

Many thanks, and big hugs from the Yukon!!

In 2016, my artistic career started developing very quickly after winning the francophone music competitions Pacifique en Chanson in Vancouver, and the Western finale Chant'Ouest in Regina. This leads me directly to participate to the prestigious Granby International Music Competition in Quebec in August 2017. This in itself will be a huge help to increase my visibility, especially in the Eastern part of Canada.

Since my participation in Pacifique en Chanson and Chant'Ouest, the demand has been increasing steadily for shows and participation in other artistic projects. For example, I was selected to take part of the CBC TV show "Prise de Son" that was broadcasted on the CBC French TV channel recently. I was also invited to take part of different events, not only locally (Constellation Francophone, Whitehorse, Yukon - June 24th) but also nationally (Grandes Fetes Telus, Rimouski, QC - July 15th, Victoria Folk Evenings, Victoria, BC, August 1st 2017, Jeudi Cabaret, La Tuque, QC - February 8th 2018).

The next step to continue growing my career appears very obvious at this stage: release a full-length album to continue increasing my visibility through touring. Having good quality recordings that meet the industry standards is essential if I want to increase my chances of being played on the radio, thus improving my visibility as an artist.

Fortunately, I received a 5000$ grant from Yukon Media Development for this project, and I am extremely thankful for it. The estimated total cost is 14 000$. I would like to raise a minimum of 2500$ to help completing my project.