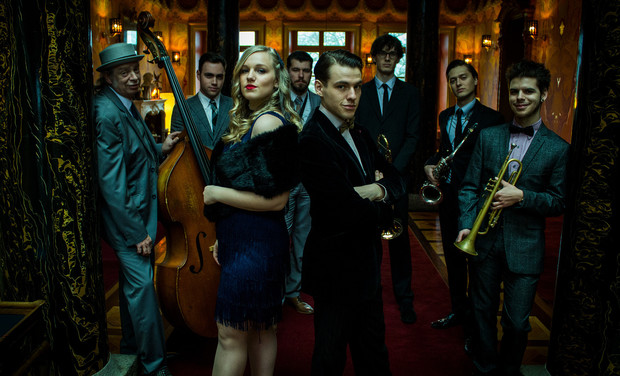 The Galaad Moutoz Swing Orchestra is an 8-piece french orchestra, dedicated to swing music. It follows the way of the great american bands that played in the dancings of Harlem in the 30's.

Their music is characterized by precise arrangements, served with style & panache by a young and talented team of swing-lovers.

While studying classical piano, composition and jazz,  Galaad Moutoz specializes himself in classic jazz from the 30's & 40's, with an in-depth study of stride piano (Fats Waller, Earl Hines) and boogie-woogie (Pete Johnson).

In January 2016, after a few intense years playing jazz & rythm n' blues in France and in Europe, the young pianist & composer decides to create his own orchestra.

His repertoire is immediately influenced by the fresh and daring example of the Chick Webb Orchestra, particularly in his work with the young Ella Fitzgerald, between 1934 and 1939.

Later on, he begins to add more and more original arrangements, and even original compositions, which now form the major part of their repertoire.

Together, they achieve to pay a vibrant homage to this swing culture that stands as a real part of our historical and cultural heritage. They are convinced that this type of active entertaining is more essential and relevant than ever, as a vector for dialogue and social linkage, in a single motion shared by the dancers, the audience and the musicians.

Here is a documentary by ArteTV in which the orchestra talks about the link between swing dance & music :

Those beautiful songs are interpreted by the delightful Katrin-Merili POOM, an estonian diva with a bright & powerful voice, a perfect technique, and a stunning stage presence.

As well as writing and directing, Galaad MOUTOZ leads his orchestra from behind his piano, with virtuosity, a great sense of musical invention and an electric showmanship.

The horn section is composed of Simon PELÉ on the trumpet, Thomas CROGUENNOC on the alto saxophone, Benoît CARNET on the tenor saxophone and Simon LA TOUCHE on the tombone.

Together, as thick as thieves, they deliver here a powerful old-fashioned swing, and there a velvet cushion for piano and voice to coil up in. Individually, they shine with colorful and creative solos, to make your ears & feet go nuts.

Last but not least, double bassist Philippe DARDELLE and drummer Paul MORVAN guarantee to the orchestra its constant & assured swing, as well as great dynamics, building up contrast & emotion.

The album is recorded, mixed & mastered by Julien Fournier at the Altsonik studio.

This project is produced by Source de Bruits.

If more money is collected :

- An amazing second clip with a great surprise guest !

Thanks + CD album sent to you

Thanks + autographed CD album + goodies (postcard, stickers) sent to you