Help the amazing neapolitan singer Walter Ricci to make a name for himself in France and around the world by supporting the CD "Nice&Easy"! 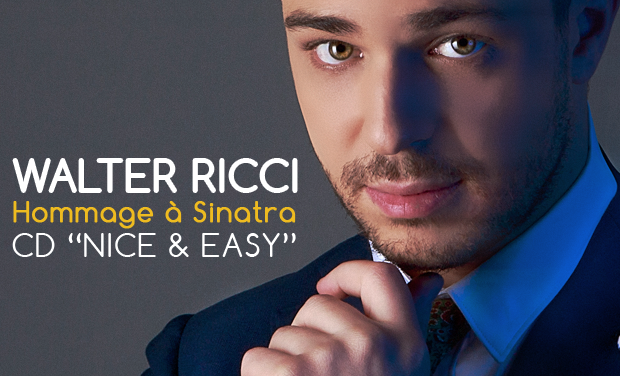 "Nice&Easy" a tribute to Frank

The beginning of the story:

It was while doing a seminar with the legendary jazz pianist Barry Harris at the Be-bop Jazz Club in Rome that the French saxophonist David Sauzay met Walter Ricci: a mutual, musical love at first sight!

After a memorable jamming session they decided to work together on a project to pay tribute to Frank Sinatra, as the hundreth anniversary of his birth will be celebrated in 2015.

Walter Ricci is a 25 year-old Neapolitan who began singing as a child by imitating giants such as Frank Sinatra and Tony Bennett...He learned the techniques of improvisation with the help of the piano and at the age of 14 he was already mature enough to play in the best Italian clubs with his quartet.

Since then concerts (meetings?), tours and recordings have come in quick succession...(a tribute to Cole Porter with Stefano di Battista, Lucas Santaniello at the Lincoln Centre in New York, alongside Mikaël Bublé...)

He is talented, passionate and inspires the admiration of all the musicians who have played with him.

He dreams of a European and international career and we share his dream!

David Sauzay is a saxophonist who was part of the "collectif Mu" adventure and who collaborated on recordings of Charles Aznavour and Kyle Eastwood. He is a sought-after sideman (40 records to his name) and also a leader of inventive projects, as his latest opus "Meeting Harold Mabern" with the famous American pianist, clearly shows. He is also the one who gave Walter his first opportunity to play in France two years ago.

Pierre Christophe ("best French jazz musician 2007") is on the piano. He studied at the Manhattan School in New York and with his mentor Jacky Byard. He is passionate about this project and his voicings wonderfully accentuate his melodies and his voice.

Michel Rosciglione is on the double bass. It's thanks to his father, the great Italian bassist Giorgio Rosciglione, that David and Walter met in Italy.

Bernd Reiter is an impressive Austrian drummer who recently moved to Paris. He brings swing, energy and precision...

Fabien Mary is a trumpet player who produces wonderful phrasing and tone. He is a long-standing friend of David Sauzay and guests on three pieces.

The songlist is composed of love songs which highlight different facets of the most famous crooner in the history of American music. It also includes a song "Anema e core", which gives a glimpse of the famous Neopolitan charm.

1. Come dance with me

3.Too close for comfort

4.Fly me to the moon

7.I love you for sentimental reasons

8.You make me feel so young

It was produced with a rare musical harmony and we hope that you will experience this magic.

It was created for all lovers of jazz and the crooners, Frank Sinatra in particular...

It was recorded at the Bopcity studio in Pantin on 19th November 2014. The mixing and mastering were carried out (under Walter Ricci's supervision) in Naples at the Red Pecky studio.

The CD will be available in september and the release concert in Paris will happend on the 30 th of september at the Sunside Jazz Club.

Discover the EPK presentation of the project:

We hope to create a large community of enthusiasts around this project, bring together fans who will follow and support Walter Ricci, encourage and congratulate him, talk about the CD and concerts to their friends!

A real impetus to boost his career: from Grumo Nevano (a little town near to Naples) to New York...!!!!

The album is finished and we are proud of it!

Now we have to let everyone know about it !!! We have to create a "Nice&Easy" buzz.

The donations received will be used to:

- pay those who have participated in the production of the album and have kindly waited a while to be paid :

- manufacture more CDs (we've got only 1000 CD's , half of them is intended to be used for promotion)

- guarantee the professional promotion of the CD

- € 1000 : buying advertising space in the spécialised press and hiring a photographer

If we succeed in collecting more, we will be able to invest the extra in:

Whatever the amount you are able to give, we thank you for the interest you have shown in this project !

Thank you so much !

Digital version of CD + thank you on the kisskiss page

Dedicated CD + thanks on the web kisskiss page

Dedicated CD + dedicated photo + thanks on the kisskiss page

Having a 15 mn conversation on skype with Walter Ricci or David Sauzay : you'll have the opportunity to ask them about their secrets (harmonie, saxophone mysteries, voice technic ...) + dedicated CD+ dedicated photo + thanks on kisskiss page

VIP evening ! (for one person) : you 'll participate at the checksound , eat and laugh with the musicians, enjoy the concert and follow them untill the end of the night !!! +dedicated CD + thanks on kisskiss page