Donate and support our theatrical play "The way I loved.Chernobyl" based on the true stories of people who lived through the Chernobyl disaster! 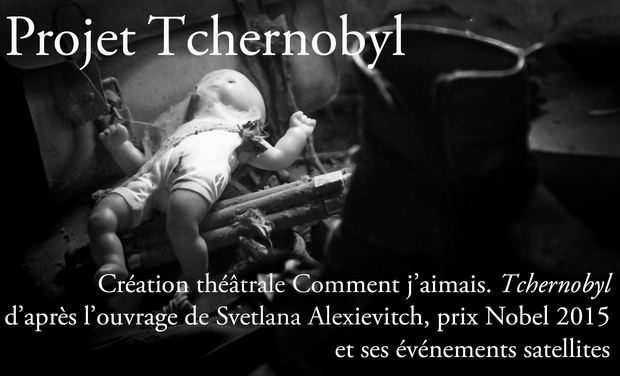 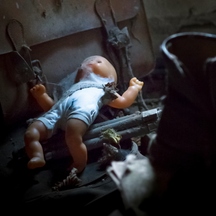 We are working on a theatre show on the Chernobyl theme "The way I loved. Chernobyl" as well as on several satellite events as photo exhibition and "nuclear talks" in order to enhance public awareness on the nuclear energy.

In that is the beginning and the end of all. All is in man, all for man!

Ludmila and Vassily just got married, and are expecting their first child. Just an ordinary couple, there seems to be nothing unusual here. Unfortunately for them, they live in Pripiat, which is the closest town to the Chernobyl Nuclear Power Plant...

On the night of the 26th of April 1986, Vassily is one of the first firemen to arrive and work on the roof of the 4th block of the reactor, where the meltdown occurred.

Our texts are inspired by the true stories of people who witnessed Chernobyl accident reported by 2015 Nobel prize winner, Svetlana Alexievich.

Why bother talking about this today?

Today, 30 years after this tragic accident, the theme of Chernobyl is more relevant than ever.

On one hand, one can easily draw some parallels with the current political climate in the former Soviet block countries, where observers draw attention to the lack of freedom of speech and respect for human rights.

On the other hand, nuclear energy is one of the alternatives to help us satisfy our increasing demand for energy and address our global climate change concerns.

Finally, we simply have to talk about events like Chernobyl and bring to the attention of our earth community the impact of technological advancement at the expense of our environment and well-being. There have been several man made ecological disasters since Chernobyl, but this stands out as a symbol of human suffering.

As follows, from left to right and top to bottom:

Other persons and organisations involved :

Being a young theatre company isn't easy. We have to work hard (and for free) in order to provide the best quality of staging in a difficult financial context.

We already spent over 400 hours of work on this show and obtained agreements with 4 theatres to show our theatrical creation to public. We now need your help to finish the staging and present our work.

For more  information about us, visit our web site

Your donations will help us to :

1. Complete the staging (venues, transport, food and beverage while working away from Paris)

2. Purchase fabrics to make costumes and create decorations with the help of an independent artist

3. Print out promotional materials to work on the creation of an alternative “green energy” energy discussion platform

What if we collect more?

- Edit the text of the show

Your donations WILL NOT provide our core costs funding.

Please be aware that French residents are eligible to the tax reduction up to 66% of the donation amount (60% for the companies). Please contact us via email projet.tchernobyl@hotmail.com or by phone +33(0)649189714 for more details.

Every contribution is important! In Russia they say: many a little makes a mickle. Thank you very much !

By giving us 5 euros you allowed one of our 6 team members to eat during one day! A HUGE thank you !!

By giving us 10 euros, you've provided us with an opportunity to turn the key on a rehearsal studio in Paris! A HUGE thank you and a public thank you on our Facebook page!

Your contribution will allow us to make a costume, for exemple, the "liquidator" one ! You get all the above AND a set of photos/videos from our rehearsals!

Your contribution will allow the whole team to eat during a whole day (including a meat dish, much appreciated by some of our team members)! You get all the above AND a poster of our show!

Your contribution will allow us to print out posters and flyers of our show ! You get all the above AND an invitation to our performance during the Russian Culture Festival in Lyon !

With your help, our team members from Paris will be able to come to the Lyon region to play in front of public! You will get all the above AND an invitation for one to one of our show presentations (subject to availability)!

Wow ! Your generosity will allow us to buy all the materials necessary to make our show set! you get all the above + your/your company name on our web site and a special thank you in our video!

THANK YOU! For us, your generous contribution also means the show we passionately work on is very much expected by the public ! You get all of the above and your invitations for 2 both for our show and for our performance during the Festival in Lyon! Also, heroes must be known, so we mention your / your company name after every presentation.

Wow! We appreciate so much your help! And we'd like to give you an exclusive opportunity to discover what happens "behind the scenes" during our rehearsals and even participate in our warm up! (plus all the above, of course!)

We are impressed and touched by your action. We want to know you more and would like to invite you (+1) to join us for a diner in Lyon, Saint Etienne or Paris! you also get all the above!

BRAVO! You are one of our biggest sponsors! You get all the above and your name/ your company logo on all of our promotional materials during our shows in 2016 in 3 cities of France !(subject to approval by the theatres)