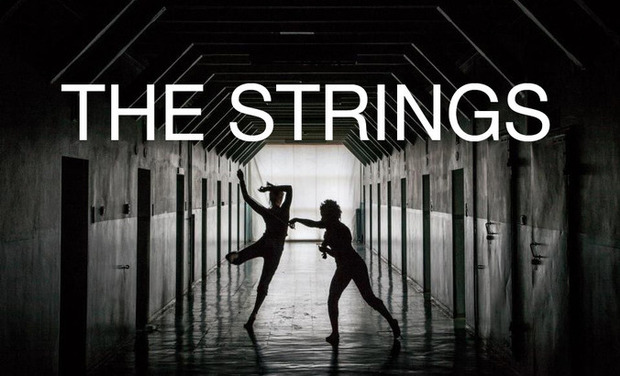 We, Mbalou Arnould and Nella Turki, are creating a team project and laboratory of exercises on the theme of “instrumentalisation”.

The project will first consist in a work of observation and experiment focused on the different links, connections and roads– the “strings”- of communications in our social relations.

This work will have two directions : First, the creation of a duet performance mainly based on sound and movement. Second, the development of creative exercises - based on our duet performance- using different art forms like puppetry, dance, fine arts, acting and music to build creative workshops and sharing our project to audiences in France, Finland and Portugal. These workshops could be used as applied art forms or educational and social tools of communication.

The idea for The Strings was born when we collaborated for the first time creating a duet in Turku (Finland) in the frame of Citadel, a site specific creation based on Saint-Exupery novel and leaded by the physical theatre company Divadlo Continuo (Czech Republic) that took place there, in an abandoned prison.

Our work there was guided by the relation between movement and music (violin). We explored the different possibilities of relation we could develop between a moving/dancing body and a musician : who is manipulating/following/creating the other ?

This was a good starting point for Strings. For our performance, we want to interrogate the notion of “instrumentalisation”, along with the ideas of manipulation and leadership this concept conveys, in the sphere of human communication relations. How the “strings” of communication are created ? How are we influencing each other through them ? How is created this imbalance ? Is it during the moment when one is pulling the strings and print his movement on the body, the spirit of the other ?

Our stage idea for The Strings is to create a “Space-Instrument” using different kinds of connections with microphones and our two bodies. These relations are interesting due to the multiple possibilities they offer : strings can be links, they can be musical instrument but also the “instrument” of manipulation (we all have the image of a puppet pulled by strings).

Transforming the whole space of performance into an Instrument would allow us to open possibilities to integrate the audience in its interactive communication: being part of the space to become “instruments”. This connection with the audience will also be developed through the workshops based on it. Its aim would consist in creating connections between us and reveal the impact of “Instrumentalisation” on a large group of people.

We are two, we are Frensh and Finish, we live in Czech Republic and Portugal, we are actresses, puppeteers, dancers, researching,creationg and experimenting.

Nella Turkki is a Finnish performing artist and creator who works a lot with combination of dance, object theatre, fine arts and physical theatre . Beside of many other courses around Europe Nella has also attended puppetry studies in Turku Arts Academy in Finland and Theatre studies in ESMAE in Porto. At the moment Nella is creating new performances in Porto in Portugal.

Mbalou Arnould, French performer, is working since the end of her actor studies (ARS, Lyon) with the Divadlo Continuo (www.continuo.cz) , International physical theatre based in Czech Republic. With them, she participate to the creation of  several site-specific performances and leadership of workshops. She plays violon and habe tried last years to integrate it to her stage practice.

We’re now collecting money for our first experimental exercise period and creation of performance in Porto, Portugal for February 2014. We will start this project by a rehearsal session which will end with a first public presentation of the work in late February 2014.

Afterwards, we’ll create a second session of rehearsal and workshop shared with people during the late spring for organizing other performances in France, Portugal, Finland and maybe elsewhere in Europe.

Thanks to local support, expenses for rehearsal and performing spaces are covered. Therefore, our expenses will be : -Transport : Moving back and forth from Prague to Porto for Mbalou $ 250 + Transport for the second session of reharsals, $ 250. Total =  500€. -Material : light and sound system rent,materials, costumes, microphones. Expected cost : 400€ -Defrayal : of friends, artists, sound and light technician, advisers, that would come to help in giving birth to this project. 100€. = 1000€

A thank card + one personalizated element linked with the performance (program, photos, etc.) + an integration to the group mailing list summerazing the evolution of our activities

Previous elements + a signed picture of the performance on photo paper.

Previous elements + a printed and illustrated diary of our creation process

Previous elements + invitation for a workshop session to share the exercices built for the performance or video-conference meeting to discuss about it.