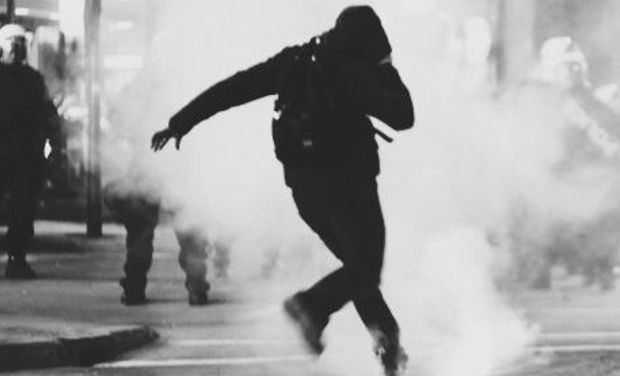 PRESENTATION OF THE PROJECT : EMEUTE - Sorry for the inconvenience

My research focuses on the expression of anger, the origin of violence, its motor and the impacts it causes. Sometimes denounced but often taboo, this psychological and bodily, social and political violence, will be the starting point of this project.

EMEUTE - Sorry for the inconvenience is a multidisciplinary creation in which theater, movement, sound and objects coexist. To enrich my research and build this universe, I am working in collaboration with a sound and light technician, a visual artist and a costume designer.

It is an immersion at the center of a confrontation between a people and a government. Two entities are in opposition: the protesters and the security forces. Everything distinguishes them: their bodies, their actions, their voices.

In the play, a journalist-reporter and five young people of different nationalities (American, Iranian, Israeli, Korean and French) testify to this anger.

These characters explore and confront their cultural differences: the expression and anger of a people against the power of a state, civil resistance to the repression of the police, civil disobedience to police violence, freedom of expression in the face of manipulation and censorship, the public service in the face of pressure and a state law enforcement tradition.

These subjects are treated from the point of view of the demonstrators, the police force or the media. Actors seize gestures, songs and protest objects as a means of expression. I rely on this universal symbolism to highlight a common language. This project encourages public debate on the reasons and expression of anger. I also discuss freedom of expression, commitment to a cause, necessity and legitimacy of violence and the resulting impacts.

"From Lenin, so it would be anger that moves and moves societies. Except that, he says, the fate of this anger, beyond the "simple explosion" it basically constitutes, is to find its form only in a "project". Georges Didi-Huberman

In collaboration with First Round International Creative Platform.

The creation EMEUTE - Sorry for the inconvenience also  seeks to be financed by theaters, public organizations and foundations. If you have suggestions or you know organizations that are willing to support us, do not hesitate to contact us.

Our budget is up to 25,000€. We are still waiting for answers from theaters and foundations that could participate in 20% on this budget. However, we need a little help from your generosity and motivation to start our first residences.

Here are some figures on the budget of this creation:

- The salaries of the team represent 60% of the total budget

- The rehearsal spaces, the decor, the costumes, the accessories, the technical elements that we need represent 20% of the budget total

WHAT WILL THE CROWDFUNDING SERVE

To finance the 1st residence at La ménagerie de Verre from 22 to 26 July 2019. This residence gives us the opportunity to set up a real laboratory for physical exploration. To consolidate interpretation and layout, research and themes are discussed. To take advantage of a space of creation, to defend the values ​​of this project. Finally, to be able to present a “sortie de résidence” with our research and to provoke a debate around this creation.

To finance a second residency between October and December. This residency will be more focused on the construction of the show and researching the sound. The sound has a major role in this creation, it will give us the opportunity to work with a sound engineer.

To be able to finance an administrator to assist us in the administrative process of this project. To be able to create grant files, supervise future calls for projects and future residences. A major objective that will allow us to organize a solid start for the year 2020.

Our biggest thanks on facebook et instagram EMEUTE page + a photo dedicated by the team + a RIOT badge.

Our biggest thanks on facebook et instagram EMEUTE page + a photo dedicated by the team + a RIOT badge + un gilet jaune dedicated by Clara Rousselin.