Testimonies, filmed, drawn, photographed. From Argentinian men and women who have organized themselves _ collectively, locally, away from the State. To invent ways out of the 2001 crisis. 12 years after, what happened to those initiatives ? How do they function ? The idea behind : what if the experience of the South could inspire the North ? What if the crisis could reinvente our possibility to act collectively ? 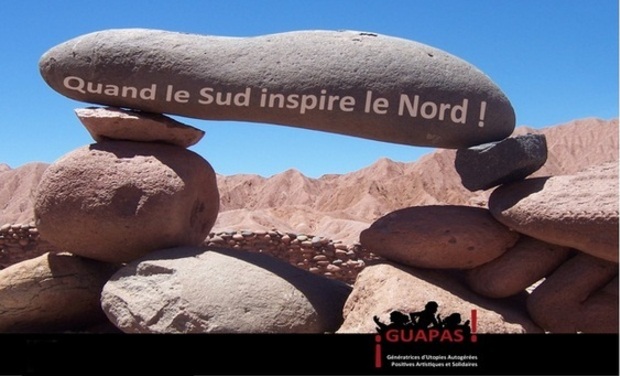 Get inspired elsewhere to act locally

" It's the crisis". Finance crisis, environmental crisis, social crisis, cultural crisis. Our financial, economic and social models seem unable to ensure people's wellbeing. The Old Continent tries to save itself the usual way, and people tend to wait for a providential solution coming from its government. In that context, few innovation emerge.

September 2001. Argentina. It's the crisis. It is suddane and violent. That time, no solution are coming from the government. Money devaluation, bank crisis. People do not trust the State no more.  The rage become rebelion against the State. People have find out solution by themselves to maintain their wellbeing and construct their future

Little by little, women and men organize themself, independently from the State and from international help. They rethink the space of everyone in the community, through collective action. They take back their destiny into their hands through local, social, artististic and solidarity initiatives. They reinvente a world.

From the movement of landless peasants, to the community of " piqueteros", through self-managed communities in the North of Argentina, the movement  «  el aprentisaje en servicio », the collective creations are numerous but lack of media coverage. Some works according to very simple models that could be reproduce without too much technicity or fundings. The idea : common sense, enthousiasm and creativity.

Our project is to go and document some of these initiatives through a sensitive approach mixing narratives, participatory observation and artistic sharing.

We will use photo, filmed portrait and strip cartoons to report back our experience and give European people the will to build collective action here, at the local level.

Marielle and volunteers from la Fundacion Leon, who helps families from the barrios to improve their well-being through education. Tucuman, Argentina, 2008

September 2011, Marielle on the phone : " Emilie, what if we we were going to Argentina next year to do a webdocumentary about the self-managed initiatives that appeared  there after the 2001 crisis and see what is happenning now ? "  Both burst out laughfing : " let's dare ! "

For Emilie, one year of study at the London School of Economics on gender and social innovation.

For Marielle, one year of project development in popular education, social economy, and video.

Also, the discovery of Melanie. She knows Argentina. She was there during the 2001 crisis. Out of this experience, she created her first strip cartoon on the theme. Mélanie will join. And draw.

Our project is born : it will be a photo-cartoon-video report in Argentina on collective and self-managed initiatives, post 2001 crisis.

In English : Generator of Solidary , Artistic, and Self-Managed  Positive Utopias.

Understand Argentina to Act in Europe

There, we are going to meet local ngos, fundations, and individual who have developed self-managed initiative to answer a social or environmental need and improve their well-being. .

Live with them for a little while and understand the way their organize themselves in order to bring back some method of collective action.

It will be a trip of 3 months from Tucuman to Patagonia, through Mendoza and Buenos Aires. Three months during which we will meet men and women who might well be inventing the social world of tomorrow, three months of picture taking, filming and drawing. Three months to live, experiment and share.

The second step of our project is to set up a multimedia exhibition to make the link between Argentina and Europe.

Back in Europe, we will analyse the method of collective action that brought well_being in order to share them.

Our method : to organize a laboratory-exhibition mixing strip cartoon, photo, film portrait, diary and workshops. This exhibition will travel in innovative but also very common places ( groceries, public places...), and on the internet through the web platform  HumanReport.org.

Our aim : provoke some discussion and the will to act locally.