Support the 2nd CD by Refugees for Refugees, a project that brings together musicians from Syria, Iraq, Pakistan, Afghanistan, Tibet. 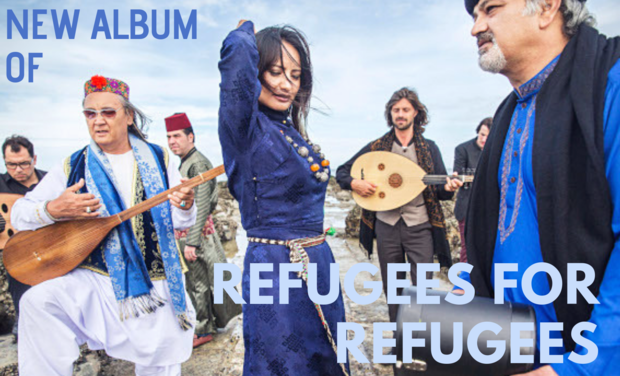 This is the last straight line to finalize the recordings, the graphics, the promotion! The official release of our CD is set for February 16, 2019 and will be accompanied by a first presentation concert at Ancienne Belgique (Brussels, BE) and followed by many other concerts in Belgium and elsewhere. You can follow all news on our page: https://muziekpublique.be/artists/refugees-for-refugees/?lang=en

See you soon for big news and thank you again for your enthusiasm and support!

Refugees for Refugees unites 10 musicians who are refugees and have arrived in Belgium from Syria, Iraq, Pakistan, Afghanistan and Tibet. They have united their diverse musical heritages in order to create a unique repertoire, building bridges between their cultures and putting out a message of hope and resilience.

From the foundations that they have built has emerged an amazing synergy, extending ever further the boundaries of musical collaboration. As if turning a new page, the new album symbolizes reconstruction, a fresh breath in order to find a way forward after having their lives torn apart.

“In music we will be trying to reverse what’s going on in the world. Maybe music will give the solution not to be enemies.” (Tarek Al Sayed, Syria)

The group called Refugees for Refugees is the fruit of a meeting between traditional musicians who arrived in Belgium as refugees and the association Muziekpublique, a world music center based in Brussels. Fleeing the disasters of their regions of origin, threats impelled them to leave what was once a wonderful land and leave behind  an essential heritage, but taking with them their knowledge and their instruments.

After bringing out their first album, Amerli, in 2016, a number of the musicians decided to continue the adventure via a number of concerts to keep alive the commitment at the heart of the project. Two years have passed and the adventure so far has been unbelievable.  The first album was voted “Best album of 2016” by the highly rated international “Transglobal World Music Charts”. The group had the good fortune to perform on some outstanding stages and to enjoy some shared moments which will long remain in everyone's memory: Music Meeting (NL), Africolor Festival (FR), Espéranzah Festival (BE), Festival des 5 Continents (CH), Globaltica Festival (PL), Festival van Vlaanderen (BE) and many more.

Why a second album?

The band’s current repertoire represents an exciting new stage in their development, consisting  of joint compositions of hitherto unreleased and original titles drawing on the traditions of each participant. Proud of the path they have followed and of the message that they bear, the musicians in the team are determined that this second album should see the light of day. The release of the album is planned for February 2019.

The members of the band are:

Muziekpublique supports and promotes world music in three main areas: organizing concerts, coordinating a music and dance academy and  producing and distributing CDs. It's through this last activity, the Muziekpublique label that we are taking forward the Refugees for Refugees project with the same attention to detail that we brought to the production of our previous albums, concentrating our work on the quality of the music, on taking good care of the musicians and on their musical development.

Emre Gültekin, saz player but also an excellent sound engineer, will supervise and record the performances. His refined hearing and sensitivity will ensure an album with subtle production values, reflecting the talent of the musicians. Dieter Telemans will take the photos for the booklet, which will be produced by Désirée De Winter, following the example set by previous Muziekpublique albums.

We really have need of you and of your support. THANK YOU!

In all, the production will cost some €25 000. Considering that this kind of project must also be supported by public funding, we have additionally applied for public financing and the amount we have been granted is €5000. However, it's obvious that the more this crowdfunding succeeds, the further we'll be able to go with this project. That's why we are asking for your support to raise €10 000 in order to realize this project in the best possible conditions. The remaining amount will be provided by Muziekpublique.

All funds collected will be collected by the organisation Muziekpublique and devoted 100% to the project Refugees for Refugees (apart from commission accruing to the Kisskissbankbank platform).

Find out more about us

Report - Refugees for Refugees in Kortrijk

A big thank you! + the digital album to download

A big thank you! + 1 CD sent at home + 1 other Muziekpublique CD of your choice sent at home + post card + your name in the booklet + an unreleased track to download

A big thank you! + 1 CD sent at home + 1 other Muziekpublique CD of your choice sent at home + post card + your name in the booklet + 2 tickets for a concert

A big thank you! + 1 CD sent at home + 1 other Muziekpublique CD of your choice sent at home + post card + your name in the booklet + an unreleased track to download + 2 tickets for a concert + 1 autographed poster

A big thank you! + 1 CD sent at home + a set of the 5 Muziekpublique albums to collect + post card + your name in the booklet

A big thank you! + 1 CD sent at home + 1 other Muziekpublique CD of your choice sent at home + post card + your name in the booklet + an unreleased track to download + a one-hour lesson with one of the musicians to be determined