Give meaning to progress: participate to the deployment of a technology to protect large cetaceans! 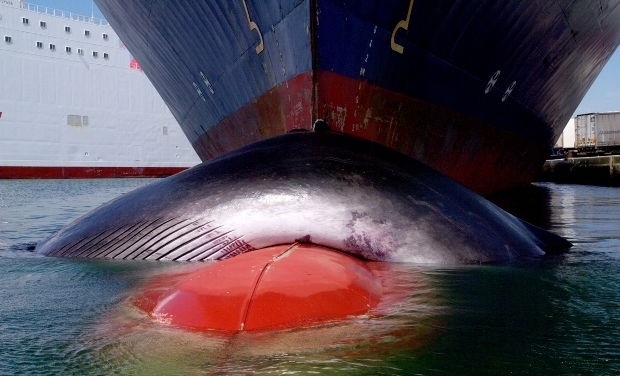 The Mediterranean Sea hosts some of the most emblematic animals of the planet. The fin whale, a 40 to 70-ton whale, is the second largest animal the Earth has ever known. The sperm whale is a 15 to 18-meter predator capable of diving for 90 minutes down to 2 km deep, in complete darkness, to feed on giant squids. At the top of the food chain, these animals are essential to the environmental balances.

Despite their gigantism, fin whales and sperm whales are fragile. Just like us, they have lungs which require them to reach the surface to breathe. Up there, they cross paths with the thousands of large ships sailing in the Mediterranean each day. The terrible and lethal collisions between ships and whales represent one of the main causes of mortality for these whales. Isolated in the Mediterranean, the populations of these two species are seriously threatened by ship strikes.

Captain Frédéric Capoulade, now president of Souffleurs d'Ecume, recalls: "At the helm of cargos of high-speed ferries between Corsica and mainland France, I collided several times with whales. These moments really shook ma career as a Captain and I chose to implement a series of actions to reduce these accidents, first within my company and now as president of Souffleurs d'Ecume".

Very discrete at the surface, large cetaceans are hardly detectable by officers on board. To tackle this curse occurring in the heart of the Pelagos Sanctuary, the NGO Souffleurs d'Ecume has been federating and raising awareness among shipping companies for 15 years. With them, the NGO developed a collaborative computer system called REPCET (for REal-time Plotting of CETaceans). REPCET gives the opportunity to increase the low "detectability" of whales by sharing whale positions between ships in real-time through a satellite communication.

It's a simple principle: each large cetacean observation made by the crew on watch from a ship equipped with REPCET is sent in real-time via satellite to a server on shore. The server stores the data and broadcast alerts to the other ships equipped. Alerts are then mapped on-board on a dedicated screen and dynamic risk areas appear taking into consideration the animal movements. An intuitive display helps rapidly identifying dangers and their nature in order to improve watch on deck or reduce speed for example, and therefore significantly reduce the risk of a collision.

Moreover, the system records the cetacean positions transmitted by ships while it's being used. The database thus created is made available to the scientific community with an objective of virtuous circle: improve our knowledge on cetaceans to improve their protection.

Under the patronage of yachtswoman Catherine Chabaud and supported by the Fondation Nicolas Hulot, the REPCET system is recognised as a pioneer and exemplary project likely to put progress in the service of biodiversity preservation.

By its collaborative nature, REPCET requires a high number of ships to be equipped. To this day, four French shipping companies and the French Navy  are involved and already equipped 10 ships. The CROSSMED (French Mediterranean Maritime Rescue Coordination Centre) and the Port-Cros National Park are also equipped with a shore version of the system. It is a good start but it is not enough for the system to be fully efficient. At least 30 ships must be rapidly equipped to reduce the risk of ship strikes.

► Your support will give us the opportunity to equip at least 5 more ships.

The objective is to give other shipping companies the opportunity to test the system and thus become ambassadors of the spread of REPCET towards others.

Combined to the training and awareness raising work conducted by Souffleurs d'Ecume, your support will participate to reach the objective of 30 ships equipped within 2 years. This is the essential basis to make the system fully operational.

► A tax receipt will be provided for each contribution: 66% reduction on income tax for private individuals (a 100-€ donation only costs you 34 €) and 60% tax reduction for companies.

The REPCET system is certified by the French Mediterranean Cluster and is carried by the NGO Souffleurs d'Ecume and the company Chrisar Software Technologies. Since 2005, its different components (software development, research campaign at sea on large cetaceans to define risk areas, awareness raising among shipping companies and the general public, ship equipment, crew training, development of a REPCET smartphone application) have been benefitting from the support of the French Ministry of Environment, the Pelagos Sanctuary, the ACCOBAMS, the PACA Regional Council, the Var Council, the Fondation Nicolas Hulot, Armateurs de France, the Fondation Ensemble, the French Water Agency, the Fondation Bouygues Télécom, the Fondation Salins and the French Marine Protected Area Agency. Four French shipping companies have already equipped several of their ships (La Méridionale, Orange Marine, Gazocéan-ENGIE and Someca Transports). The French Navy also equipped a ship. The CROSSMED and the Port-Cros National Park are also equipped with a shore version. The list of all the REPCET partners is available here.

GLORY TO YOUR DOORSTEP: your contribution will be acknowledged on the websites www.repcet.com and www.souffleursdecume.com (unless you express the wish to remain anonymous). And to show how grateful we are, Jérôme commits to coming to the office on stilts with a straw hat.

YOU DO THE WORK FOR US: Previous compensation + you write a text, short or long, take or draw a picture or sing a song... on the protection of biodiversity which will be published on our Facebook page with reservations of moderation (e.g. if you wish to promote whale meat, we might ask you to qualify your words).

AN AUTOGRAPH FROM THE "FOAM BLOWERS": Previous compensations + a dedicated picture of the whole team (on which Mika will be well-groomed).

YOU MAKE US SUFFER: previous compensations + a Souffleurs d'Ecume poster (sperm whale photographed between Corsica and mainland France by the NGO). If you don't like the picture, we can also send you a white poster on which you can put the picture of your choice.

WE REDECORATE YOUR INTERIOR: previous compensations + a Souffleurs d'Ecume poster (sperm whale photographed between Corsica and mainland France by the NGO). If you don't like the picture, we can also send you a white poster on which you can put the picture of your choice.

A DAY IN MONACO FOR TWO PEOPLE: In addition to previous compensations, receive 2 tickets for the Oceanographic Museum and 2 meals at the restaurant Stars'N'Bars.

THE TEAM STRIPS DOWN: In addition to previous compensations, you receive the "The Souffleurs Gods" calendar in which you will find the members of the NGO! We really are ready to do anything to save whales...

WE DRESS YOU UP FOR WINTER: previous compensations + an organic cotton Souffleurs d'Ecume sweatshirt in the size of your choice. If the sweatshirt is the only thing you want out of all what you have been reading so far, do not click here but contact us (because 200€ is a lot for a sweatshirt).

YOU GO OUT TO MEET WILD CETACEANS: In addition to previous compensations, receive a whale-watching trip for 2 people from a city of the French Mediterranean Sea with one of the operators certified "High Quality Whale-Watching".

APP AND TRAINING: In addition to previous compensations, the REPCET smartphone app (Android) is yours, with a training course to learn how to identify Mediterranean cetaceans.

CORSICA FOR THE HOLIDAYS: previous compensations + a crossing mainland France / Corsica for 2 people with a cabin on-board a car-ferry equipped with REPCET (possibility to visit the bridge to see the system in action).

EMBARK FOR SEVERAL DAYS FOR A RESEARCH PROGRAMME ON LARGE CETACEANS: In addition to previous compensations, Souffleurs d'Ecume offers you to participate to one of our research campaigns on a sailing boat to study the behaviour of large cetaceans in the Pelagos Sanctuary in order to improve risk areas in REPCET.