Schieven Architek: The largest Justice Palace in the world

Be part of the project of valorization of the Justice Palace of Brussels: Book, artistic creations, videos and exhibitions... 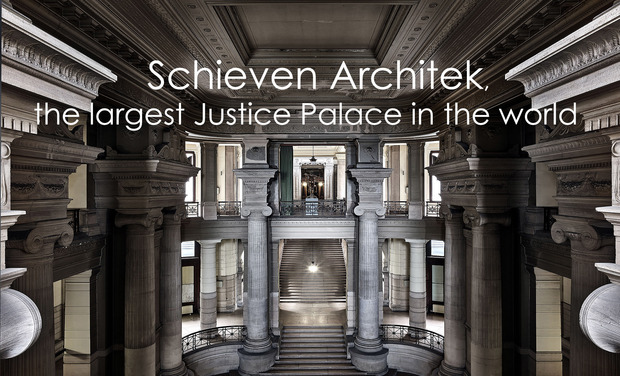 Schieven Architek: The largest Justice Palace in the world

The Justice Palace in Brussels is more than its thirty-year-old scaffolding. Above all, it is the symbol of a justice system which intended to be strong and independent, a system of checks and balances that is essential in our budding Belgian democracy. 150 years after the laying of its foundation stone, it still remains today the largest Justice Palace in the world and has every reason to be a source of pride for the people of Brussels.

Éditions Larcier, the oldest Belgian publishing house, and Meta-Morphosis, one of the youngest players in cultural engineering, came together to collaborate with Belgian and international artists in order to celebrate this heritage through a memory-preservation project that combines tradition and technology.

° Photo shoot: Axel Ruhomaully, photographer and co-founder of Meta-Morphosis will reveal through his photos the beauty of the Justice Palace of Brussels as you have never seen before.

The dome of the Justice Palace

The Hearing Room of the Court of Cassation

° Production of videos and films of the Justice Palace.

° Interviews of the Justice Palace’s current and former staff: they will share their best memories of the Palace and will also share anecdotes unknown to the general public.

° Artistic collaborations: Pierre Vanherck, Belgian creator of luxury canes, made two sticks of justice from materials originating from the Palace's reserves. The first will be offered to the Bâtonniers of Brussels on September 1st at the academic session of the re-entry of the bar, the second will be put up for sale at auction (profits will be reinvested in the project).

° Involvement of the younger generations in the project, cultural mediation on the theme of justice:

What is the perception of the notion of justice by the new generations? How can we reconcile the population with this complex entity and how can history help us understand this necessary complexity? Artistic collaborations and technological tools will allow us to raise awareness among children in a fun and engaging way.

° Publication of  a book with artistic photography, testimonies, and artistic collaborations that preserve and showcase the memory of the Justice Palace of Brussels.  A beautiful book of about 300 pages, 2 editions (French / Dutch and English / Spanish).

Badjawe, offers collector badges "Schieven architek", the nickname attributed to Joseph Poelaert by the Marollians following the construction of the palace

Arkadia, embarks you on the discovery of the Justice Palace and its various prestigious auditoriums up to the dome for a breathtaking view of the city. Three types of guided tours:

- The Palace and its dome group visit

- The Palace and its dome private visit

- A cinema workshop (minimum age: 15): making a short film on the Justice Palace with LaCam, a Brussels-made, handcrafted camera made from recycled materials. Schedule for the day: shooting in the morning, developing in the afternoon

- A photo workshop using vintage cameras: taking paper-based photos using folding cameras made between 1895 and 1915 (minimum age: 15). Schedule for the day: shooting in the morning, developing in the afternoon

Pierre Vanherck is the creator of luxury canes. He creates exceptional works with a peculiarity of associating noble woods, precious metals and even the setting of precious stones of which he alone holds the secret. He created the canes of Pope Benedict XVI, Baron de Rothschild and at the request of Meta-Morphosis created two sticks of justice from materials recovered at the Palace of Justice.

The total budget of the project will be complemented by the pre-sale of books, the sale of works of art (photos, artistic collaborations ...) but we also need your support in order to offer you the best of the Justice Palace of Brussels.

The collection will thus support the project as a whole: