SEEF is a mirror for your phone, that will secure you when you'll be texting while walking ! Stay Seef ! 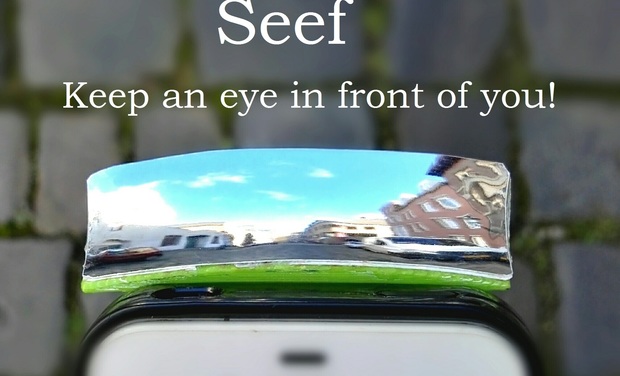 A survey from the group BMF shows that 75 percent of the French population aged between 18 and 24 has already accidently stepped on a street because they were using their phone while walking! The number of pedestrians ‘death on the road is rising and directly correlated to the amount of people using their smartphones while walking. Nowadays, the problem of the people texting while they are walking concerns more and more the public authorities (some US states want to enforce laws to forbide people to do it ; Switzerland broadcast shocking publicity to sensitize the population to this danger).

Seef is a device that you can fix and remove in 1 second on the back of your phone and that will allow you to see in front of you while you are using your phone! It doesn’t only make you safer, it makes the use of your phone way more convenient.

Started 4 months ago when I observed two people bumped into each other because there were texting without looking in front of them, this project is our second start-up. I begun to draw the plans in my computer and spent one month in a engineer laboratory to use their 3D printers. The first prototypes were born!

Many versions have been necessary until reaching the appropriate shape for the mirror. Indeed, what's make Seef special is the very special shape of its mirror. Both concave and convex, the field of view offered is far wilder than on what you could have on a simple plan mirror!

Moreover, a study showed us people do not want a permanent product fixed in the back of their phone. With its system of magnet, Seef takes position and is removed very easily!

We are two students in Belgium, one in law and the other in Business, wishing to promote our product to the world. The first step of this journey has been to deposit the patent on the invention.

* All the photos / videos are done with the prototypes. The final version will be far more efficient and nicer !

Now is the time of the production. And because the creation of the mold is expensive, we require your help to pursue this idea ! Until now, we have the patent, functional prototypes, a Facebook page, distributors (specialised shops and supermarkets) and producers, all ready to start !

The collect will allow us to pay the beginning of the production and to pay for the marketing.

The investment needed to start the production : 500€.

Your help would be very valuable to us !!

Get before everyone a Seef device ! Several colours will be available.

Get 3 Seef devices ! To be sure to always have at least one with you!

Get 12 Seef devices and offer them to your family or your friends!

Get 30 Seef devices and offer them to your whole company!

Get 50 Seef devices and offer them to your whole company!

Get 75 Seef devices and offer them to your whole company!

Get 175 Seef devices and offer them to your whole company!

Get 400 Seef devices and offer them to your whole company! 1 euros each !!