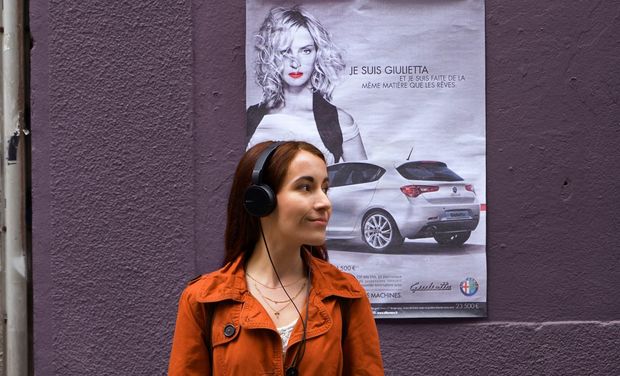 The Clito Witch: a vagina Inside Out
Esther encounters her new neighbour, Lucien, while he is locked out of his flat. In her mental and biological mind, Esther is split between different inherent forces: Kleitoris missing pleasure, hormones in a western duel, and an inhibiting sexual education's ghost.

Project's origins
The project started with the creation of a short story, named Orgasm, initially a first-person narrative. The Clitoris is complaining about the catholic sexual education its "owner" received. Guilt-creating pleasure, boring relationship and prehistorical schema penis-in-vagina: "Enough!" states the Clitoris. It is time for revenge after all those years being unfairly deprived of pleasure: the encounter between owner and clitoris, body and pleasure, I and she, is imminent.

Challenges of the adaptation were plentiful:

Here a little rush (which is neither calibrated nor mixed):

Thanks to the unwavering support, cooperation and benevolence of the team, we were able to shoot 6th, 7th and 8th of march. The self-composed music is given the final touch, the edit is almost done, sound design process has started, and we cannot wait to see the final result!

However, shooting accumulates some cost, even minimal: make up expenses, car rides, catering for 20 people etc. Therefore, we organised this crowdfunding to finish the post-production more comfortably.

In exchange of your donation, each contributor:

Finally, few movies are defending feminine experiences and are looking to redress gazes used to gender inequalities. Financing this project is also encouraging projects going against the dominant culture: this is the strength of crowdfunding.

Noémie Birard interprets our protagonist, Esther whose economical-religious-educative-political-social environment keeps her from desire (and only that).

Comedian and musician, Aurélien Cavagna is playing Lucien; a neighbour who, despite his obsession for his sinuses' welfare, wakes up the inner world of Esther.

Comedian, writer and clown, Sarah Brochard interprets Adrenalin, the only body component who did not lose hope yet, that one day, perhaps, Esther would find the way back to desire.

Actress, puppeteer, mime and clown, Alice de Murcia embodies Uterus, the youngest member of the team who aspire to be more than a belly.

From Ukraine, Irina Lytiak acts as Svetlana, a severe ballet teacher, at the origins of Esther's traumatic shame.

Active member of the THEF (organisation for a feminist theatre), Marie-Caroline Guérard incarnates Dopamin, chief of the hormone's commando.

Studying a theatre master, Fanny Tuffet joined the adventure to play Oestrogen, unit of the commando led by Dopamin.

Olga Darcel - screenwriter and director - is part of a direction masterclass animated by Bastien Daret, screenwriter and producer. The movie has been developed in that context. She's interested in picture's function and power.

Kasia Balas - Polish autodidact director assistant in fiction movies. As a feminist believing in pictures' power, she has been quickly attracted by the project mixing humor and feminin pleasure.

Andrea Simonetta - script supervisor and editor - is one of the most experimented members of the team. From the Neapolitan region, he incarnates the definition of a multi-task person: director, editor, script, screenwriter, videographer etc.

Benjamin Delobelle - sound recordist, boom operator and sound designer - is part of the cinema school CinéCréatis. He is also sound designer and composer for Auror'Alpes, whose goal is the popularisation of universe sciences. Quentin Goncalves - his classmate - is mixing and mastering the music.

Lou Gagnieur - chief electrician - is studying at the cinema school Arfis. She works on film set every weekend.

Laurette Darnault - make-up artist and hairdresser - has been trained at Métamorphoses, professional make-up and VFX school. Today, she works on students' projects and TV sets.

Charles Traboulsi - calibrator - just arrived from Beirut. A color virtuoso, he is a professional of advertisement color grading. Today, he would like to get specialised in fiction movies.

Finally, Alexander Borsch as chief Régie, and Iris Deporcq as assistant Régie. Without them, we could not have eaten and moved.

As the graphic shows us, Kisskissbankbank has an 8% commission. We wanted to integrate it into the graph to be as transparent as possible.

Moreover, if you are proficient in French, you surely noticed that the remuneration of the team was mentioned nowhere.  Indeed, the team was entirely volunteering, including the professional who joined the project. Therefore, the budgetary surplus will go to a symbolical remuneration.

If we reach 600€, each member will get 10€: as mentioned, this is a symbolical gesture, for the time and the energy they gave during the last weeks.

Your name in the credits A copy of the movie (with english/german subtitles) An invitation to the projection (at the end of the confinement...)