10 years of creative energy dedicated to the Rock music, as a result : "Sound the Charge" ... click, check and give your support! 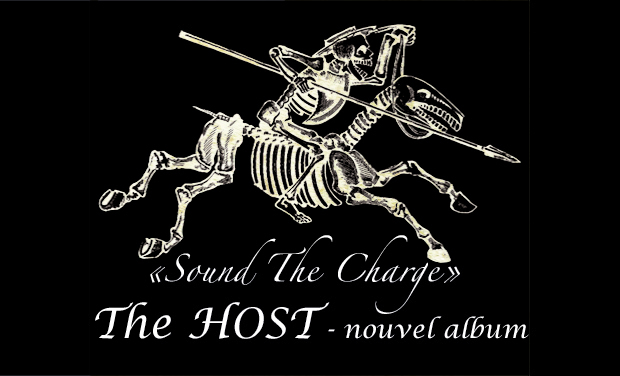 Without any kind of pretention this is what can be said when people see us on stage :

"[...]I'm here in the openning act of Johnny Winter's venue with a band that i've never heard of and which really surprised me.The HOST is a magical pop/rock trio influenced by mythicals bands like Pink Floyd, Led Zep, etc...[...]

The band knows how to hold the audience breath thanks to their tunes, with some strong guitar solos, with steady and accurate Thomas' drumming. In the same time the tender, deep and gliding voice of Jullien strengthenned by the subtle playing style of Vincent contribute to the show quality.

The audience does not save his applauses after every songs to express its recognition to this unique band which knows how to share a musical pleasure legacy from the best years." Janfi - Concert and Co Translate by T.Campion

After 10 years of self producing, 1 album, 2 EP, 150 gigs, we keep on composing and interpreting in the most sincere way, the music built with our real-life experiences and others influences.

By now, we're inlarging the handful of inflexible fellows that records, films and supports us and made us tour.We are inviting you to take part in the process and to make this adventure going on, this adventure that keep our determined rock music alive.

Listen to " Lovesick", one of the 13 tracks outcoming album :

Here's a meeting with the little HOST family :

The Director's cut : "Sofair" (Sofiane et Eric, film makers/producers), always on the edge to catch our best figure...and you need some skills to do it well !

Olivier, "it's a kind of magic" sound live engineer.

Blight (Beware of the picture...it's not reliable, he is very kind and not "wanted"), who make us tour through beautiful places to get in touch with you.

Victoria (aka Vic "butch"), who get the best of us in studio.

The HOST Mobile : after two frontier police controls, a thousand miles, loaded like a mule, being harassed by some "losing control" passengers... it's still there, faithful , vaillant...all bumpers ready!

Now that you know the whole little family , let's talk about what bring you and us here :

There are two goals :

- financing the promotion of our last album (we're looking for a label, a Producer...)

- financing merchandising for our venues.

The Band and their associative financing structure "The Factory" payed for the producing and the recording of this new album for an amount of 10 000 €, thanks to the sellings of the former merchandising (T-Shirts,CD) but also with our own private investment and with the support of local french state institution.

To end this recording we have to pick up enough money to finance the two lasts subjects above.

The"Sound The Charge" sticker with special thanks from the band, for the 30 first kissbankers 5 MP3 tracks of the new album will be sent.

The rock steady pack #1 : The HOST new album "Sound the Charge" CD version, a round badge, a sticker.

The rock steady pack #2 : The HOST new album "Sound the Charge" CD version, a round badge, a sticker + The "Love, Birth and disillusions" album.

The rock steady pack #3 : The HOST new album "Sound the Charge" Vinyl version, a round badge, a sticker.

The rock steady pack #5 : The HOST new album "Sound the Charge" CD version, a round badge, a sticker...with the first HOST EP "Burning Altamont" digital edition + The "Sound the Charge" T-Shirt, the poster tour edition, the eco-cup...and a unique surprise cover by kissbanker recorded in our rehearsal place.

The rock steady pack deluxe : a private electric or acoustic gig at your house,Beyond 150 km the traveling costs and accommodation will be to define.This pack also include the "Sound The Charge" vinyl or CD version, The "Love, Birth and Disillusions" CD, The "Burning Altamont" EP digital version, The "Sound the Charge" or "Bearded Men do it better" t-shirt, the eco-cup, the round badge, the poster tour edition.