Pre-order SUPER KIBLIND 4, one year of contemporary illustration and 24 international illustrators in one book 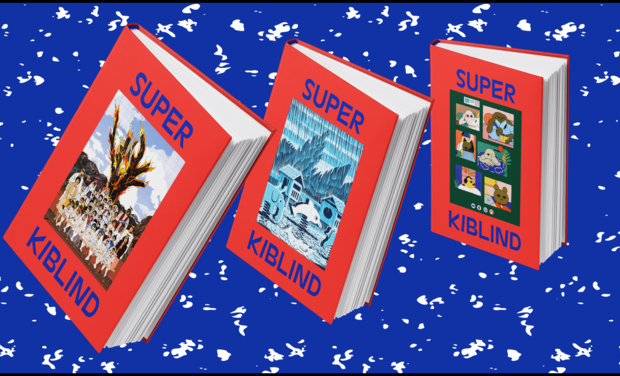 Super Kiblind, the mega collection of illustrations, hits the stage at the end of every year focusing on showcasing young illustrators from around the world. And... here it comes with a 4 added to the end of its name and the desire to place the spotlight on the great revival of contemporary illustration through 288 pages bubbling over with illustrations, portfolios and secret bits & pieces about everybody who played a part in making the pages of Kiblind Magazine a feast for the eyes in 2020. How about getting this jumbo giant delivered to your letterbox before anyone else, and before it hits the bookstores by pre-ordering now.

Kiblind, the Lyon-Paris-based magazine that's been magically-monomaniac and super-sentimental since 2004, meticulously centre stages the original creations of talented young artists which it adores across its pages every quarter. A few years ago, Kiblind decided to throw itself body and soul into its burning passion: contemporary illustration. Every quarter, it religiously brings together the illustrations of artists who let their imagination run free in the spirit of the themes chosen.

To showcase the creations of the girls & guys who invite us to glimpse the world through their eyes and their art, we've got into the habit of publishing a hulk of a book at the end of every year, a sketched track record of the year gone by bearing witness to the richness of current-day illustration.

After Super Kiblind 3 published last winter, it's time to introduce you to the newest member of the family, which goes under the name of (following intense team brainstorming) Super Kiblind 4. This wonderful, soft-to-the-touch object with its woody scent, printed with tender, loving care, spanning 288 pages, brings together the work of 24 artists who've become masters in the art of capturing fragments of life on paper. A bilingual collection, a weaveworld of portfolios, different walks of life and multiple sources of inspiration.

Oh, and as we just love letting you choose: Super Kiblind 4 is available with three different covers reproducing the covers of the 3 Kiblind Magazines issued this year illustrated by Ugo Bienvenu (Mysticism), Jon McNaught (Weather) and Hel Covell (Best Friends). So, it's up to you to choose the one that tickles your fancy the most.

In a nutshell, Super Kiblind is:

📕 Texts in English and in French

And for any tech-savvy out there:

📕 A Hardcover, warmred-printed on Fedrigoni imitlin paper and screen-printed using Pantone 72U

It's definitely worth mentioning this Super Kiblind 4 pre-order campaign which ensures you get it delivered to your letterbox before anyone else, before it hits the bookstores (planned for January), and, all that without having to pay shipping costs.

As for us, it means we don't have to play it by ear and enables us to ease book production costs.

Kiblind likes to do things one at a time. It began with a magazine dedicated to visual culture and contemporary illustration that was launched in 2004. A few years later, the team formed an agency based in Lyon and Paris specializing in visual communication and artistic collaborations for cultural venues, brands, institutions and media. To indulge their guilty pleasure, in autumn 2017, they opened their own studio in Lyon, a new space for exhibitions and production to further develop the magazine's artistic vision, through the creation of illustrated objects using printing techniques, particularly risograph. At the same time, the magazine also embarked on the great adventure of publishing, releasing the annual Super Kiblind collections, the En diagonale and Azur illustrated reports as well as art books.

In a period where the small business sector is under great strain, pre-ordering our next book will help us cushion costs for purchasing paper, printing and the upcoming publication. Oh, and the book costs €35, so as you'll have guessed, shipping costs are our gift to you.

SUPER KIBLIND 4, what more could you ask for... Our amazing 288-page baby with a choice between 3 illustrated covers by Ugo Bienvenu, Jon McNaught and Hel Covell. Worldwide delivery. Shipping costs offered (around 10€)

SUPER KIBLIND 4 + The Dogs picture book The illustrated jumbo giant with a choice of cover + its little sibling by Kiblind publishing: the picture book full of dogs with 28 illustrations of our best friends for life included. Worldwide delivery, without paying the shipping costs.

SUPER KIBLIND 4 + Its risograph-printed poster The illustrated monster with its 288 pages and a choice of cover among 3 options + the corresponding poster, A3-size risograph-printed by us in our Kiblind Studio. Worlwide delivery, without paying the shipping costs (around 10€)

SUPER KIBLIND 4 + SUPER KIBLIND 3 The 4th edition of Super Kiblind + its little sibling Super Kiblind 3, released last year which focused on showcasing illustrators we passionately adore in 2019. It's still as up-to-the-minute as ever, we swear. Please mention in your mail to store@kiblind.com the cover you wish for Super Kiblind 3: Maria Medem, Annu Kilpelaïnen, Maïté Grandjouan or Liam Cobb. Worldwide delivery. Shipping costs offered (around 10€)

SUPER KIBLIND 4 +AN €80 gift voucher to be used in our online store The just-mentioned Super Kiblind 4 and your choice of cover + a gift card for yourself or any other human you'd like to give it to so you don't have to choose any of the above extra little somethings and can buy whatever takes your fancy on Kiblind-store.com Worldwide delivery. Shipping costs offered (around 10€)