An international video conference about Lights Festivals, followed by a light painting photos exhibition and a video mapping performance! 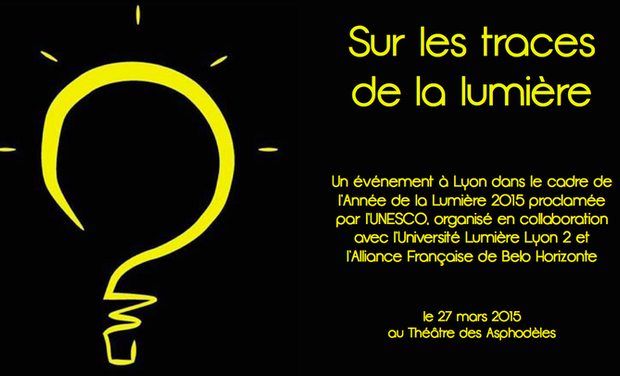 A professionnal event followed by a friendly public viewing! The public will be able to meet the artists and the professionnals and vice-versa.

During the 18th century, the advent of the Enlightenment Age spreads all over Europe.

In the 21th century, 2015 was declared by the UN as the international year of light and light based technologies

Lyon is truly a pionner in the field! Fête des Lumières was originally the 8th of December, and was born in 1852 on the occasion of the celebration of a religious statue in Fourvière Basilica. Since the 2000's, the Fête des Lumières of Lyon in December attracts on average 3 million people every year. Therefore, it is an event which allows an economic, touristic and cultural development. The architectural heritage is made more attractive, the urban space made more dynamic, the city lighting redesigned and the artistic matter put back at the heart of the town.

Belo Horizonte in Brazil tried several attempts in the video mapping domain in the festival of new musical trends Eletronika. Brazil is therefore at the core of this modernity and those new artistic and digital forms. For instance, the 1st festival of mapping was organized in Rio in August 2014.

Aiming at galvanize the town of Belo Horizonte on both economic and cultural levels, and to reinforce links between France and Brazil, but also to add value to the architectural heritage of the city, we wish to put in place a lights night in december 2015 which would be inspired by the Lyon Fête des Lumières. A conference with France would be the 1st step to this long term project.

We also wish to make you discover artistic techniques which use light as an artistic material : those of light painting photography and micro video mapping. The exhibit of pieces of art linked with light will allow a reflection about light as being a physical and visible phenomenon, however ephemeral and untouchable as an artistic tool.

OUR EVENT IN 3 IMPORTANT MOMENTS

This international video conference with professionals from the light sector in Belo Horizonte (Fabio Fonseca for example) and in Lyon (political representatives, mapping artists, town planners, lighting engineers and designers) has for goal to exchange skills, know-how and knowledges but also experiences about light in the urban landscape.

The main theme will be the organization of a Lights Festival.

The speakers will have to explain their career and their daily work as an introduction but mainly to highlight the different aspects and components of such an event : artistic, technical, administrative, economic, ecologic, political, town planning dimensions.

The audience will be invited to ask questions in the end to discuss and debate. We will invite in this respect all professionnals from the light field interested but also engineer students, light designers, architects, fine arts and cinema students (interested in mapping and digital arts in general) from University of Lyon 1, 2 and 3 and other relevant schools.

Jadikan is the photographer we will exhibit. His work reflects the use of light as an artistic tool reinvesting often abandonned places in the urban territory. He uses the technique of light painting, that is to say the fact to capture the luminous tracing in movement in a night-time or dark setting thanks to a long time exposure.

The video mapping (or mapping 3D) is a technique of projection of images on objects or volumes in 3D.

Thanks to specific softwares, the volumes are drawn or reproduced, in order to obtain projections on complex surfaces.

Often used for night-time monumental events and shows, it is less known when it consists in micro video mapping indoors, on small objects.

Therefore, we wish to entertain the evening with a digital piece of art to continue exploring all possibilities that light offers on both technical and artistic plans, by making discover to a large audience a little known version of mapping while echoing with the video conference held in the afternoon where we will have discussed video mapping on monuments on a town scale.

- To root this project in Lyon, a recognized territory in the field of light for its key role

- To spark off a reflection on light as an artistic, digital and technical tool

- To raise awareness about the importance of light everywhere around us and the way political, cultural and artistic actors but also new technologies seize it to create new pieces of art

In charge of international relations for this project, he arrived in France 2 years ago and is a sociology teacher in Belo Horizonte, his hometown. He wrote his master's dissertation about Caravane des dix mots project. Hard worker, he always keeps a smile to relax the environment without ever forgetting his professionnals goals and the objectives he wishes to achieve with success. Full of good and enthusiastic ideas, he would like to work in the conception of cultural French-Brazilian projects and cooperation.

Responsible for mediation and speakers, she lived and studied all accross the globe thanks to her Erasmus Mundus Master in Lille in Intercultural Mediation. From Rio de Janeiro to her home country, Romania, she always keeps in mind her objective to work in cultural diplomacy. Her philosophy of life and her spirituality are always in good mood to cheer the team up, even facing difficult times.

Our communication and press relations officer in the project, Polish, she came to Lille to study a bachelor in Culture and Medias. After her graduation, she studied her Master 1 in communication to then work in the office of the European Culture Capital Wroclaw 2016. Since 2012, she writes as a critic in the artistic magazine Format in Poland. Participating to the project "On the tracks of lights" allows her to be part of an event that links the two subjects which she is the most interested in: city and art. Committed and very productive, she is a strong asset to this team.

Administrative officer in the project, half French half Brazilian, she studied litterature and philosophy as much as foreign languages, geography, international and European law, political sciences or history. As an adventurous soul, she lived in England and Geneva, Ouest and South of France, Lyon and Paris. She never stops to explore the world. She worked for the University of Leeds as an Intercultural Ambassador, for the French Federation of UNESCO societies and for the World Meteorological Organization. This project allows her to reconnect with her home country (Brazil) and to act for the light year 2015 organized by the UN and UNESCO.

Your help will help to pay:

- the artist for the video mapping performance (150€)

- the photographer's transport from Grenoble to Lyon (40€)

- the graphic designer who helps for the communication media documents (50€)

If you cannot contribute financially, you can still help us:

- Offer us useful contacts who would be interested (we are looking for students in buffet planning or restaurants, in photography/journalism to cover our event or anyone else interested in being involved in any sort of way)

- To support a student project

- To help a cultural, artistic and international project

- To allow the networking, the exchange of skills and know-how between professionnals from the light domain both French and Brazilian

- To enlighten the artistic work of local photographer

- To highlight and enhance the micro video mapping, notably at the regional level

- To provoke debates and thinkings amongst students and professionals

What we can do, if we earn more than asked:

- Pay the speakers of the conference

- Pay more the artist for the video mapping performance