The "Sweet Masala" is about to see the light in a few weeks. Your warm hands are welcome to back us to release the Cd in the US, UK & France 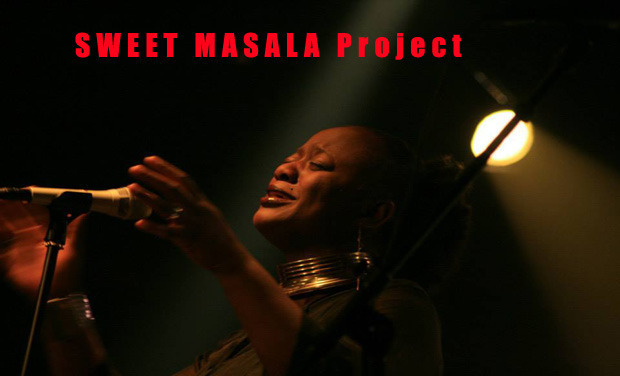 Mix of spices and experiences put together in music. One voice, one message, a poem...songs that come from the roots... songs that tell about Life and its " after", the Soul, Hope & Fights, Women of the World, Africa, the Universal and intimate...Hymn of Love, from Roots to our dreams.

«SWEET MASALA» is the solo album of Sabine Kouli that becomes an international collective artwork.. In studio in Lyon at the Supadope, in Erevan at Armen Studio , New York at Craig Levy Little Pioneer Studios and London, the different blends are mixed in harmony.

its an experience where the talents are mixed.

PRESENTATION OF THE MUSICIANS

Maitane Sebastián is a member of the Sendrez Quartet, winner of the Bonnat prize at the International Maurice Ravel Academy 2009 and the Proquartet special prize at the Concours Européen de Musiques d'Ensemble de Paris 2012 (FNAPEC), of the duet A Tempo with the accordionist Philippe de Ezcurra, of the duet Parhélies with the pianist Julien Le Pape, of the quintet Tango del Alma (Piazzolla's works), and complements her discography today by releasing the recording of her compositions for voice, cello and piano with the CD "Searching Plato Bay" at CDM in Toulouse.

I met Maitane on gospel project. I was attracted by her stage presence, warmth and talent. Although she has been classicaly trained, she has played many musical projects with various influences.

Sergio Laguado is from Colombia.

he plays the classical guitar and has played in the orchestra of l'niversité Autonome of Bucaramanga (UNAB-Colombie), Macaregua, Quintocando, Lucia y los 5herentes, the band of Silvio Martinez.

I met Sergio during a festival and we have decided to work together on my project . you will hear him on " Mi tierra roja, mi tierra negra".

Prince t, by his real name Kwizera Thierry, is a son of Africa, born in Burundi east africa in 1990.

Straight from East Africa Burundi, Prince T ( Kwizera Thierry) is a Hip Hop and reggae singer. Born in 1990 in Burundi  , spent eight years  in Germany  , went for ten years back to Burundi, and finally ended up in France . He likes using his travelling life experience and influences trough his music..  Writes and performs in Kirundi (mother tongue) , English, German, and French. Influenced by the African drums rythms,90's Old school Hip hop, and Roots reggae music, he uses a deep bass voice , lyrical tricks,  unpredictable flows, to share his passion. With a spiritual background his lyrics often like to deal  with" a metaphysical understanding of how  as spiritual beings we  experience this physical life" as he says in his own words. Performs as a solo artist but often plays with a band. He started rapping in a Burundian Hip Hop collective called NWF (nine warriors fellaz) and with their early recordings and performances, they helped their elder Burundian hip hop peers to build a Burundian International Hip hop scene, which was practically inexistent before. He encountered Sabine Kouli (Gospel singer) with who he decided to work on the Sweet Masala project, he met and is the Rapper and singer of 3 different bands; Cerca (Hip Rock psychedelic), Triple "P" Trippers (pop rap) and the Smoothies funkers( funky jazz Hip Hop), and has  released his second Hip Hop reggae mix tape called "Just for the sake of Love".

As an actor, Dionne appeared in Cape May Stage's production of Lady Day at Emerson's Bar & Grill. She is a composer, creating music and lyrics for This One Girl's Story, Artistic Director of TruPraise Gospel Ensemble, and a regular performer in, and consultant to France's Absolute Gospel Festival.

Dionne has composed the music and lyrics of the song “ Soul Kitchen” and the music of “ Show me your light”. I feel so grateful to work with such a talented artist!! thank you again Dionne!!

Carlos Johnson, is an american blues guitarist and singer. He is left-handed, but plays a right-handed instrument upside-down like players such as Otis Rush and Albert King. Johnson  has attracted audiences in Chicago blue scene since the 1970s. He has played on recordings of notable musicians including Billy Branch & the Sons of Blues ans Son Seals.

Johnson also made an album as a duo with Branch titled Don't Mess with the Bluesmen in 2004. Another CD In and Out from Mr. Kelly's Records followed the same year. In 2007, he released a live album Live At B.L.U.E.S. on Halsted recorded in Chicago.

In juin 2012, We are both booked  in an international Blues Festival in France. For the first time in my life, I am totally hypnotised by the way he played and handled his guitar! It was warm, deep, intense, strong and highly musical!! It was .. waow!!!!

Out of the stage, we made a promise to meet again and to sing on our CD!

Our song will be only available online.

David Randall is a guitarist, producer and composer. He has contributed to multi-million selling albums by Grammy Award winning artist Dido and has toured the world a number of times performing with UK dance act Faithless. His own critically acclaimed albums released under the name Slovo feature international collaborations with artists including Iceland's Emiliana Torrini, West Africa's Maezah and US jazz legend Max Roach. he is based in Brixton (UK). On his album " slovo" released in 2003, we worked together. 10 years after, It's my turn to invite him on my solo album!! Here we are!!

When I first traveled to Armenia in 2012, I was charmed by all the traditional instruments that I have heard and I was also moved to see the young musicans were eager to keep their tradional music alive.

I went to 2 concerts in Erevan and Gumri and I met Rasa-lila and Edgar.

They have played on the song "Sooner or later".. When I went back to Erevan in october 2013, wehn,  the plane landed, I had tears of joy. I wanted to write a song of hope for Armenia and its people..

Edgar Asmaryan was born in 1992 in Yerevan, Armenia. Edgar is a musician, who plays an Armenian Folk instrument called Duduk. He played in several musical groups such as “Narekatsi” , “Tavigh” Ensemble and traveled to France and Switzerland spreading the melody of duduk which is the ultimate expression of the Armenian soul. Edgar has a BA degree in Yerevan Komitas State Conservatory Department Folk Instruments and Folk Singing (Duduk) . Now he is doing his Master degree under the general guidance of professional musician Varazdat Hovhannisyan.

This crowfunfing will help us to release the album in the US, Europe and Armenia