ONLINE TANGO FOR THE ELDERLY? 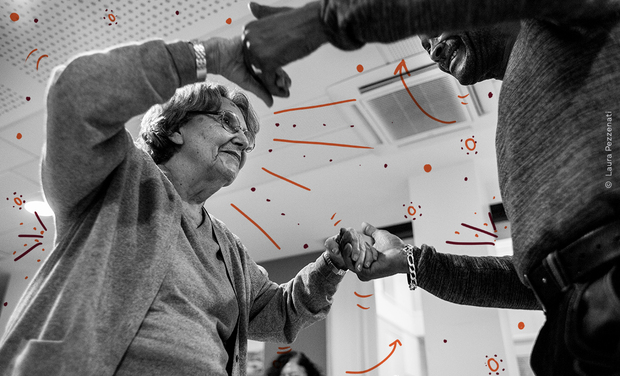 ONLINE TANGO FOR THE ELDERLY?

For 10 years now, ABB reportages has been working to bring Tango (Music, Movement, Dance and Social interaction) to the elderly.

A sequence of training, workshops, research protocols and audio-visuals are used to provide and communicate an improvement in motor and cognitive functions that Science confirms.

At the time of Covid19 and of restrictions of visits in retirement homes (EHPAD), ABB Reportages, in conjunction with the University of Burgundy-Franche-Comté and Inserm, continues to deploy a real weapon against the isolation of the elderly: the ONLINE Tango workshops and the INTERACTIVE ONLINE Tango workshops.

A concept and three women

Starting at the Artistic Residence of La Prée, thanks to an invitation from Agnès Desjobert, director of the association “Pour que L'Esprit Vive”,

communicated through the documentary "The Melody of Alzheimer's",

The project "The Caravan of Memory" has been set up in France in about thirty places, then in seven other countries…

What are the objectives?

What does FACE to FACE Tango stand for?

It's a couple (musician and dancer) who come to the elderly with the mission of making them sing, move, dance, smile and Live.

This work is done respecting therapeutic Tango, initiated by Rodolfo Dinzel, in Argentina. Rodolfo was the first to introduce this dance to patients and seniors suffering from neuroevolutionary disorders.

All the animators are trained in this specific Tango by dancers-tangotherapists, who were themselves trained by Rodolfo Dinzel. The training is re-transmitted to all those who want to work using this method, once a year, at the University of Bourgogne-Franche-Comté, via the SEFCA.

Listening to others, searching for body weight, gliding, connection, freedom, improvisation are the vectors of this revolutionary teaching.

In the current context of a sanitary crisis, during Face to Face interventions, health precautions are respected: ventilation of the premises, use of hydro-alcoholic gel, wearing a mask, respect for a distance of one meter between each participant, and no contact between them.

it's possible in one way or another!

Thus, the workshops are set up with seniors, with a different frequency according to each case and the possibilities.

In many places, the project is monitored by a team of researchers supervised by France Mourey (Inserm 1093).

See, for example, the workshops introduced FACE to FACE, in San Francisco, at the Rosener House Day Center, where they are now followed ONLINE.

At the beginning of 2020, as soon as the lockdown in the retirement homes was announced, the team decided to invent a new way to reach the elderly as quickly as possible, as the epidemic was plunging them into loneliness, anxiety and sadness.

That is how, all the – now teleworking – actors of the project, musicians, dancers, physiotherapists, doctors, researchers, their husbands who improvised as cameramen, invented Tango ONLINE for seniors.

What does ONLINE Tango stand for?

Every other month, the workshop reaches the retirement home through a newsletter.

Each ONLINE workshop is a recreation; movement and dance of 25 minutes or in 5 minutes increments, according to what is chosen in a playlist (6 possible choices).

Each retirement home participating in the workshops (FACE to FACE or ONLINE) can send in their photos, videos of the workshops. The best testimonials are selected and rewarded with presents. In addition, if these images are accompanied by a sharing right, they are communicated in future newsletters to enlarge the community of tangueros elders.

239,449 people were reached by our workshops

but nothing prevents us from imagining and doing even more ...

What does INTERACTIVE ONLINE Tango stand for?

Whilst keeping on increasing the face to face and online Tango workshops, the team decided to launch another stage.

INTERACTIVE ONLINE Tango is a pedagogical project in 6 parts, which will prepare the return to FACE to FACE sessions.

Thomas Poucet, representative in France of the Dinzel System, accompanied by the Tango singer Sylvana Yustino, will give 6 live lessons, which can be followed from the retirement homes via a ZOOM, TEAMS or JITSI platform.

In a logical and progressive way, the basis of Tango Dinzel are thus transmitted to the elders, who then reproduce the movements, guided by the dancers who can correct them and exchange ...

For each course there is only one retirement home.

Real bases of a method, the workshops will be filmed and edited in order to be shared with other retirement homes.

Also, translated into English or Spanish, the Interactive Online Tango will be able to be taken to the 7 countries where the Online Tango project already exists.

This new tool will allow the implementation of a monitored pedagogical method, with gradual progress in the difficulty, as the workshops are scheduled and set up.

Alongside the recreation that Online Tango represents, this is the arrival of a real learning tool for study, mobilisation and research.

Music, Movement and Tango in retirement homes, even in times of a health crisis, it remains possible!

So shall we go? It's as simple as buenos dias! Listen to these ladies from ISATIS!

The overall budget for the continuation of the project is 90,000€, which includes:

ABB Reportages and Les Amis du 7 are co-producers of the project; and several foundations have been solicited.

What we are missing:

The call for donations of €10,000 and more will allow to continue the financing of the Online Tango workshops, but will also be a starting point in the launch of the Interactive Online workshops. This includes, for instance, the fees for the dancers and musicians and the production of the audio-visual material.

If the collection exceeds its target, more workshops and more people will be reached!

Whether they are FACE to FACE, ONLINE or INTERACTIVE ONLINE!

Already dozens of FACE to FACE workshops have been given

To continue these workshops in time and space,

and to develop the INTERACTIVE ONLINE workshops,

this project needs to be made known.

We need to help fund it

Individuals, to please an old one who is close to YOU,

Hosting structures, to implement the project sustainably and in other retirement homes,

or simply, YOU who have a crush for it!

offer, from 25 euros, a Tango workshop to your seniors!

Chocolaterie de Bourgogne currently has more than two centuries of history and tradition of chocolate in Côte d'Or. The company is the heir to a long line of cocoa-loving family entrepreneurs and captains of industry who, as names and sizes have changed, have been able to pass on, generation after generation, solid values deeply rooted in the Burgundy terroir. Their history takes us back in time, from the first jolts of the French Revolution to the present day, with a passion for chocolate in all its forms.

Chocolaterie de Bourgogne was developed from a new and ambitious project based on perennial values. The factory relies first and foremost on the skills of the men and women who work there, and on their know-how, passed on in Burgundy for generations. They are united by the same passion: their love of chocolate and for a job well done!

And the seniors love it.

• Osmose, newspaper of the association « Ose »

They said it and they did it...

"Your team has been absolutely incredible (no surprise!) in helping so many people during this uncertain time. Thank you for sharing your work with us and for allowing us to share your wonderful and useful videos with our own participants!”

"The benefit was obvious and it was a joy to see the residents dancing and smiling at that moment, almost instantly.

Mrs. B. who is almost bedridden, mobilized, lit up, and I could see that this activity echoed her life story. Talking with her daughter, she explained to me that her mother had often danced in her life.”

“Even residents with severe impairments found joy and happiness there, and people woke up. They've been active while maintaining the rules of social distancing and it's not easy to do that. The partners are of high quality, which adds value for the participants.”

This project started with "The Melody of Alzheimer's"; which was followed and developed with "The Caravan of Memory".

It reaches the seniors in retirement homes thanks to an incredible chain of solidarity!

We are counting on you

The collection will allow the continuing of online workshops and will constitute a starting point for the launch of interactive online workshops, but also for the creation of the pedagogical project in 6 parts.

The collection will also make it possible to pay

→ the fees of the dancers and musicians,

→ the realization of audiovisual supports.