Finance a film about the natural life cycle of people, relationships and civilizations. 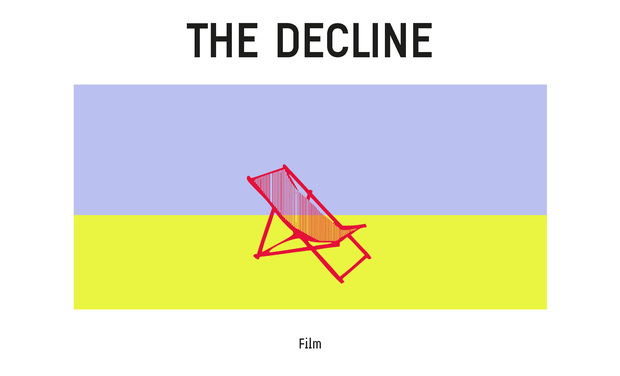 "There are no eternal truths. Every philosophy is the expression of its own and only its own time, and... no two ages possess the same philosophic intentions» Oswald Spengler – The Decline Of The West

"The future of the West is not a limitless tending upwards and onwards for all time towards our presents ideals, but a single phenomenon of history, strictly limited and defined as to form and duration, which covers a few centuries." Oswald Spengler – The Decline Of The West

Spengler’s work deals with philosophy art religion Politics economy all to prove his theory that Civilizations, like everything in nature, go through a beginning, a middle and an end, and have a life cycle just as we all have. Whether it be a life cycle spanning centuries or the life cycle of a single man, Spengler believed everything is bound by the same universal laws. The idea of the macrocosm of world history and the microcosm of human existence being bound by the same rules, inspired me.

I would like to make a film where both these histories are shown side by side on the screen at the same time. Just as in the modern world, where we are bombarded on all sides with images and it is difficult to see on the bigger picture, When we are so caught up in our own lives so it will be in this film.

A voice over reading excerpts from the text of «The Decline Of The West»: will run throughout the film and this voice over along with the original musical score will hopefully juxtapose and harmonise the dual images on the screen

"For primitive man the word ‘time‘ can have no meaning. He simply lives without any necessity of specifying an opposition to something else.He has time, but he knows nothing of it. All of us are conscious, as being aware of space only and not of time. «Time,» is a discovery, which is only made by thinking."  Oswald Spengler – The Decline Of The West

The first film is an art-house film inspired by 1950’s documentaries from the Nouvelle Vague in France  like Alain Resnais’, Chris Marker’s « Statues Also Die » (Les statues meurent aussi). Spengler often uses architecture in his work to explain his theories and we will be focusing on Architecture

This film shot with a fixed camera will run roughly from about 1000bc to the present day.

"All art is mortal, not merely the individual artifacts but the arts themselves. One day the last portrait of Rembrandt and the last bar of Mozart will have ceased to be, though possibly a coloured canvas and a sheet of notes may remain, because the last eye and the last ear accessible to their message will have gone." Oswald Spengler – The Decline Of The West

The second film is basically a very fancy holiday film. With the rise of the digital generation and the fact that technology is much cheaper and much more advanced than before we see very very slick holiday videos. The docu-fiction part of this film is a couple on holiday on a long european vacation who record their travels  the people they meet the things they come across ect

"When the ordinary thought of a highly cultivated people begins to regard«having children» as a question of pro’s and cons, the great turning-point has come" Oswald Spengler – The Decline Of The West

On reading Spengler’s book, i knew i had to make this film in Turkey. Turkey was an integral part of ancient Greece and Rome and Classical ruins can be found throughout the country.

Istanbul used to be known as Constantinople, and was the capital of Byzantine empire, before becoming the capital of the Ottoman Empire and as a modern european  city , has much of the modernist architecture that we ascociate with Western Civilization Turkey is also good for the second film, it   is a vast and varied country, over a thousand miles from east to west. And it has a very large coast line and a very nice climate it has wondeful food a rich culture and a rich history.Over the years it has become a very  sophisticated choice for westen europeans as a holiday destination to explore and enjoy.

If we are successful in raising the 6000 euros we need for our film via the crowd funding site KISSKISSBANKBANK, we will make the film during the month of August 2015. We will fly directly to Turkey, then to the east of the country by train, before making our long slow trip back west to Istanbul, via the various historical and touristic sites necessary for our film.

Due to the large distances we have to cover while making this film we need our equipment to be as light and practical as possible. We will shoot on a Panasonic GH4 camera, which has become a favorite of video makers due to its high-resolution image and quality performance in all situations. We will record sound using a small zoom microphone, and will bring with us a small tripod for static shots and some kind of shoulder equipment for moving shots.

The post-production will be done in Paris on our return, in collaboration with the post-production company ISOTOM and specifically the editor Veronique Adler. The original music for this film will be provided by the artist Pacovolume

Owen Fraser Stewart: This Scottish history of art teacher has qualifications from Edinburgh, St Andrews and Cambridge universities, but has lived and worked in France for the last 15 Years. He hhas worked in various creative fields over the years, as well as continuing to teach. As a writer he was asked to contribute 9 pages to the Sep 2014 Scottish edition of HOLIDAY magazine and was also co-lyricist for two albums by the artist PacoVolume. He has worked in contemporary art and is sporadically assistant to the artist Nicolas Milhe. In the last couple of years he has become interested in filmmaking. His first film in collaboration with the photographer Joe Boggon, was a laureate of the Inrocks lab competition and was shown throughout the summer of 2014 at the Wanderlust Paris. He has continued to make short films about subjects he is passionate about.

CeydaYagiz: This Turkish undergraduate of the « Conservatoire Libre du Cinéma Français » has been passionate about cinema for a number of years. After studying sociology at Galatasaray university in Istanbul, she graduated with a degree in sociology from the Sorbonne in Paris, before axing her studies more towards cinema. She studied cinema at the Sorbonne before taking part in FAMU International Film Initiation Summer Campus in Prague, where she participated in the au Karlovy Vary Film Festival. She has worked in film as a production assistant both in Turkey and in France as well as an assistant to various photographers and directors and in a relatively small time has acquired a large range of skills in relation to filmmaking.