Support a film of an Indian who rides 2 Himalayas with an American & sails across the Indian Ocean with a European 2 heal his pain past.

A realistic docudrama about an Indian motorcyclist who rides to the Himalayas with an American and sails across the Indian Ocean with a European to heal from his painful past.

Part One ‘’The Himalayas’’ -   The Healing Highway is a realistic adventurous docudrama film about an Indian motorcyclist ‘’Vaibhav Vashisth’’ (VV) who rides his 75,000 km old Indian made motorcycle to the highest motorable mountain pass of the world ‘’Khardung La'' 18,379 ft (5,602 m) in the Himalayan range of India (Zanskar Valley & Ladakh near China & Pakistan border). He rides with a financial analyst ‘‘Timothy J Kotovsky’’ (Tim) from U.S as his pillion rider to heal from his painful past. It’s an incredible motorcycle journey of VV (Indian motorcyclist) and Tim (American pillion rider) where they both try to fight their fear and anxieties of life by riding together on a motorcycle. The Healing Highway also focus on a massive struggle and clash between the two different culture, East VV and West Tim and how in the end they try to find the balance on two wheels.

Part Two ‘’The Indian Ocean’’ -   The part two of 'The Healing Highway' goes towards a ship journey inside the depth of the Indian Ocean. In this part VV continue his healing journey with a beautiful, strong, independent lawyer from Europe ''Yvonne Eveline Duerst'' (Amanda) who left her home in Zurich, Switzerland, in search of a new home.

Because it’s not just a documentary film.

No cameraman, no light man, no sound-man and no assistant directors. The Healing Highway is a film without a film crew. The idea behind this adventurous moving docudrama was to use minimum resource and get maximum creative results. The entire part one is shot by VV and Tim. One can easily say It’s a complete independent film project. VV has already finished shooting the first part of his film in the Himalayas and now he need your help to finish the part two of ''The Healing Highway'' in the Indian Ocean. He also needs to raise funds for the post production of his film.

Filming Part two - Shooting the Part two in the Indian Ocean. Traveling for one month for filming the part two of "The Healing Highway".

''I, as a filmmaker, as a creative person and as a human being will always be grateful and thankful to you if you can help me create ''The Healing Highway''. This film for me is not just a film. It's a piece of my heart. The Healing Highway is all about human survival, inner human conflicts and about giving hope to people who are struggling to see the bright side of life. This film is a pure healing journey. I humbly ask you to please help me and the people who have suffered because of their painful heartbreak.'' - VV

VV's film will give HOPE to people and will convey a very strong message that life is worth living no matter what happens. The show must go on "NEVER EVER GIVE UP" 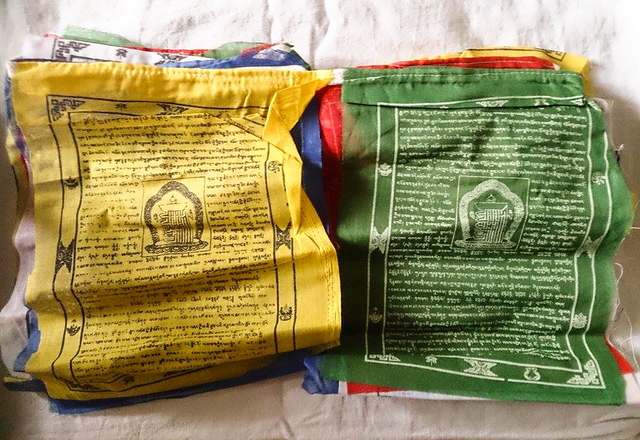 ''The Tradition Tibetan Buddhist Prayer Flag'' from Leh, Ladakh, India (also known as little Tibet). Got them while shooting the first part of the film in the Himalayas.