Support The Humans, magazine in which human experiences are at the core of… everything! Elected 2015 best project by IAE Paris-Sorbonne. 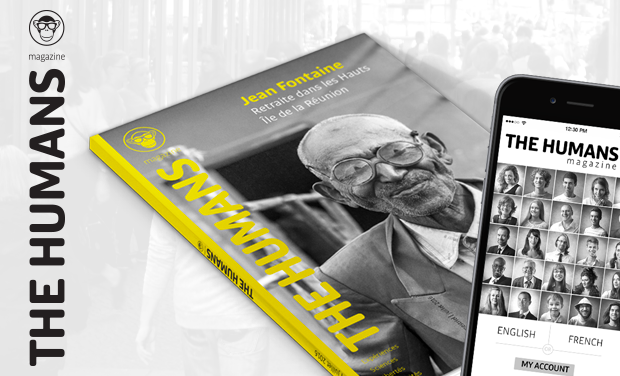 The Humans is an online and print magazine that we believe in.

The focus of the magazine will be social issues and realities, to make us rethink the different ways in which we perceive and shape our world.

How? We want people with life experiences put on the forefront. It is their perceptions and their knowledge that gives us access to the world.

Our vision? We do not pretend to have thought through a question, or found the answer, on the contrary we want to unveil the complexity of our world and the diverse points of view.

The challenge? We want to be as close as possible to the people, but keeping enough distance too.

We cannot either. Because some people are labelled as being just “disabled”, or “an immigrant”, The Humans content will not be limited to those categories, used (and invented?) by politicians, institutions and media.

When talking about these people excluded by our norms, we will focus on what is surprising, positive and beautiful.

We believe that, given the amount of information we digest nowadays, or not; it is a real challenge to keep being amazed, to still be able to question our beliefs.

We will ask humanities researchers for their own point of view, so that we may take a step back, and give a new dimension to the central concept of our magazine: the human being.

Specifically, each issue of The Humans will be dedicated to one subject. There will be photos, interviews, life narratives, testimonies, articles.

The main subjects will not be related to the news, et will deliberately be broad. It let us open to as many options as possible. Few exemples of subjects : nomadism, medicine, school, death, animals… And many others !

Our first issue will be Reunion Island (l'île de La Réunion), a tiny French island, East of Madagascar, where cultures, religions, languages and peoples all live together.

- A collection of documents about the island and more importantly its inhabitants:

Personalities: people who have an impact on their neighbourhood, city or country

What does Science think?: academics' contribution to humanities

History's thread:  a witness of the making of history

… to be continued in the first issue!

- An investigation, to understand a less tangible subject, but still focused on the people involved.

Human beauty: a column on creation, one that can be artistic or not (photos, articles or interviews)

Knock-knock: an article (or…) on the brain and how it works

Inspiration: people who inspire, thanks to their life, actions, and/or originality

It's happening!: people involved in changing the world

As you can see, nothing is set in stone; our content is flexible and so are our contributors. If it is more appropriate to talk about something with photos rather than words, with a testimony than an interview, we will be, you will be, free to choose the content.

We want aesthetically pleasing content. Some people prefers to read it on a printed version, others on the screen of their tablets.

For technology lovers, we want our magazine to be available on every numerical platform, tablet, computer or smart phone, with an intuitive and entertaining interface. But for the book addicts that we are, we conceived it as a beautiful object, with a hard cover and a glossy paper.

Because of economic and environmental reasons, the paperback version will not be found on every newstands. We will print copies on request, following the amount of subscriptions.

If we want The Humans to be for everyone, it must be understandable to everyone. The digital version will be the key of that understanding; gradually we want our articles to be translated into International Sign Language (yes, there are hundreds of different Sign Languages, amazing isn't it?), or appropriate visual options.

In order to be as open to the world as possible, we want The Humans to be available both in French and in English.

Last year, I graduated from the Université Paris Dauphine and IAE Paris-Sorbonne, obtaining the Master of Business Administration International Paris. As a final paper, I had to imagine an economically feasible press model. I received the award of the best professional project. The management, the business model, the numbers, that's my business !

To create a magazine was one of my childhood dreams. Born in a Deaf family, my parents passed me on their love for reading and beautiful books. Unfortunately for most Deaf people, the educational system, enforced by so-called “deafness experts”, only produces an illiterate population.

Along with my intention to create visually enjoyable content, I wanted it to be accessible to the Deaf or even, give them the will to read…

When talking about those who do not belong within the established norms, I do not seek to change one's point of view, nor convince, but I only want to give people the will to discover and understand others…

After a Master in Social and Cultural Anthropology, I worked for associations and as a French/Deaf interpreter. Despite everything that could have been said to me throughout my studies (some believe humanities to be useless…), I learned a lot, both humanly and professionally. Thanks to that, I am now able to imagine such a project.

Fond of researches in humanities, I noticed the lack of communication between the academic world and the people outside university. Of course, I do not pretend I can change that, but any action, even the tiniest, is important…

To be Editor? To create a place in which we can all express our opinions ? The Humans is such an opportunity for me!

Born in a Deaf family, challenges are part of every aspect of my daily life. Following a career in high performance sport, I graduated from the Ecole Supérieure du Design (Design School), my passion. I worked for many years as a webmaster in a big company, but, I had to take a chance and try so I created my own online communications agency.

“The Humans” project is something new for me, a unique thrilling adventure.

I am the youngest member of the team. Holding a diploma in Commercial Development, I love above all arts and graphical conception. I had an education in “integration”, in an environment known as “normal”. Since then, I work for Deaf companies. Currently, I am CEO of one of the companies supporting the project.

I take a real pleasure in creating visual material, images, models… Thanks to The Humans, I can take a break from being a CEO and dedicate myself to my passion.

You are the other members of this team!

We do not want to keep a fixed team of journalists, who would write about every subjects, even the ones they do not master…

Citizens, authors, photographers, activists, journalists, academics, artists, and everyone else, you are welcome to talk about yourselves and what you do!

Within every fact, there is a woman, or a man. This statement also concerns the creation of this magazine.

Because in the media, testimonies are only used to justify or illustrate preconceived ideas.

So that finally new voices, news ways can be found, not to stick to cliché but to surprise us and make us wonder.

Because we do not hear often sociological or anthropological analyses during debates, analyses that can sometimes not be accessible enough but are highly critical of our usual pattern for decrypting the world.

The first step of the scientific process is to question notions and categories that are used everyday, as human production of meaning. In a scientist’s mind, they all have the same value.

Because scientific results are often published without the scientific process being questioned. Why does one dedicates years to a study so refined that no one is able to understand its interest straightaway? What is the human and scientific perspective of the researcher?

First of all, thanks to where we were born, we are still people of the middle class (and we are proud of that!). Even if we reached our professional and academic goals, we have no familial estate, and so, our resources are really modest.

We do not have any great journalists, or any institutional support (we would not want it anyway!). It is thanks to our work, our thirst for knowledge, and our commitment that we could make our project come true. However, to be sure to take off correctly, your magazine needs enough fuel for what we hope so to be a long journey!

Fiercely independent, the financial question is sensitive for us. For aesthetic and ethical, we want the minimum of adverts (only 10% or so) but it induces less receipts…

Financial independence is a good thing, based on the ideas of independence and freedom of media. But without institutional support, and without almost any advertising income, we need you!

Finally, the creation of an independent press is expensive. With your financial support, you and us, we can do it! Technically, your money will be used to launch the first issue; the following graphic explains how it will be spent.

To sum up, in the business community, big companies, and big publishing houses have the budgets that allow them to easily function. And we don't. We need you. “Alone you can go really fast. Together, we can go really far.”