The Very Delicious Piece in a version XL goes to Paris! PARTICIPATE! 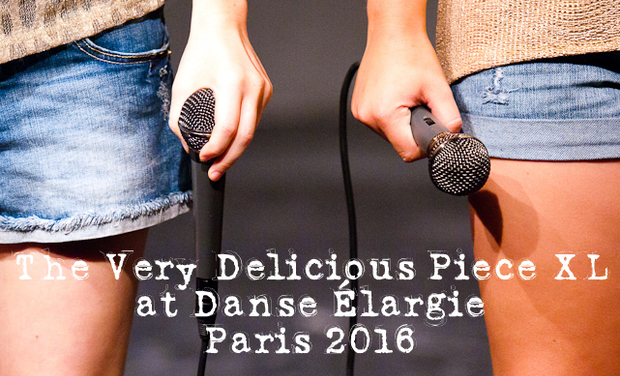 34 SELECTED PROJECTS And we are one of them!

The Very Delicious Piece XL is an extended version of The Very Delicious Piece created in 2012 which premiered at Maribor 2012 European Capital of Culture in September in co-production with DeVIR-Capa (Faro, PT), Platforma Festival – Plesna Izba Maribor (SI), HELLERAU European Center for the Arts Dresden (DE) within the framework of MODUL DANCE and by Maribor 2012 – European Capital of Culture.

We will perform in Paris on the 18th of June and if we are selected for the finals we perform again on the 19th of June at Théâtre de la Ville.

The fourth edition of the competition Danse Élargie is organised by the Musée dela Danse, Rennes (France), the Théâtre dela Ville,Paris(France) and the lG arts Center,Seoul (Korea).

The THE VERY DELICIOUS PIECE is first and foremost a search for the long lost essentially, intensity and insistency. It is a limbo meeting between entertainment, a personal experience in two and how our own vibrant transformation reaches a still audience. Shaking is the physical expression of love - a default state. Banality is common to all... The music is an external layer of memorable “rituals”. Two glowing bodies radiating 360o, exposed but detached, induce meaning through the eyes of the viewer into relationships that physically deform us and make us addicts to drama. This is not a love story!

We took the chance to apply to Danse Élargie, one of the most acclaimed international art competitions and we got accepted.

This time, for Danse Élargie, we are expanding the vibration to a bigger stage and to more bodies to understand the impact of that in the audience. Always, after we performed this piece the audience felt extremely shaken and physically and emotionally affected, even disturbed sometimes, so how would it be to if we were a mass – a mass of shaking bodies, emotionally detached, just playing with layers, that happen to juxtapose in the exact right moments and slide off when you least expect. The POP love songs, thouroughly chosen through time, add the layer of entertainment that allow the audience to be carried away by memory and by their own feelings of disgust, love, hate, inducing the experience in the audience and placing them in a contaminating moment. In The Very Delicious Piece we searched for the long lost essentially, intensity and insistency. We researched in a state that transforms the bodies, making them vibrate throughout the room seeing the space and the others as an extension of us. We contaminated a still audience and made them move with our default physicality – shaking!

How does this change the meaning of the piece and the impact it has in the audience, without even touching it’s structure, only multiplying it.

“This piece is something pretty extraordinary. It provoked all sorts of odd reactions in us. Sometimes perturbing, sometimes awkward. But also entranced, bewitched and mesmerized. It’s unrelentingly minimal and utterly engrossing as relationships between the performers and with the audience transform moment by moment” - Eddie Nixon and Ellie Beedham – programmers The Place, UK

we truly think our work is worth it and has a chance in the finals of Danse Élargie and we need support for all the production and logistic aspects of this participation for all these fabulous and talented performers and makers!

We need your support to cover:

- travels of all the performers

- accommodation of all the performers

- food for all the performers during their stay