With this fund-raising, we offer you a chance to participate in the launch of a new special album that takes the form of an installation/application:

The album is a 70 minute journey built around a main musical theme, inspired by balearic holidays then developed, nourished, enhanced in the Ivry-sur-Seine workshop-studio.

As always, music and image have followed their own road separately to finally meet and encapsulate themselves in a global project just like LIVE MIX in 2008, THIRD EYE in 2009, BALLOONS in 2010 or TECHNOCOLOR in 2011.

For many years though, we have been interested in the interaction between music and image or more precisely light.

In this perspective, we especially created the TOFIDI audiovisual project, a cosmic snake and light synthesizer at the same time, but we also collaborated with Kate Simko to make people see the music played by the London Electronic Orchestra at the Britten Theatre.

Today, with TOTEM&TABOO, the project is multidisciplinary: it takes its source in music, architecture, graphic design and computer programming.

It is with this hypnotizing and organic rhythm that we designed and built THE HUT in collaboration with Sebastien Pascot.

A listening cabin and machine to see the music, the Hut is a 6.5 meters high pentagon meant to welcome the visual musical score of the album. This golden vessel is watched by five masks, BALT, OHAOO, WHAT DO YOU MEAN, SCUBA and LA CHOUETTE, each are at the same time hosts, performers, synthesizers and masters of ceremony. Inside, they play the album with lights, each one putting a melody or a rhythm in relief, sometimes solo, sometimes together.

Outside, they welcome the visitors and protect the cabin, like colored mirrors.

In harmony with the hut, the physical listening structure of the album, we have developed AN APPLICATION that will allow to experience the album in a virtual way.

You enter the game inside of The Hut as a pedestrian. The masks starts playing with the music their light partition. As you turn around you can view The Hut as if you were inside the real one. Point the direction you wish to take, keep you finger on the right side of the screen to move forward - on the left to move backward, find one of the 5 exits start flying, exploring the whole game set, disappear in space and… begin all over again.

The application used in the hut will be like a window on another world, invisible to the eye.

Thanks to augmented reality, the hut's ceiling turns into a new center of visual attraction. Around the periscope totem, a sixth mask will enter the scene, DOSMILDOCE, the same that discretely stands on the hut's roof. It is the soul of the totem. The visitor has just to point the periscope totem's eye via the application so that the DOSMILDOCE's kaleidoscopic hologram comes into life and moves on the screen.This moving and volatile picture contrasts with the impressive structure made with more than one ton of wood, and shows a unique and playful performance of what is possible to do with this technology.

The application itself, designed for smartphones and tablets, will allow you to watch the album whilst listening to it. As if you were standing in the middle of the hut, you will be able to watch each mask by the window that is the screen, through 360°. The musical scores played by the masks will be transcribed in 3D in the application. If you point the ceiling, the kaleidoscopic hologram of DOSMILDOCE will appear.

Main broadcast channel, we want the app to be downloadable for free.

THE GOAL OF THIS CAMPAIGN IS TO SUPPORT THE FUNDING OF THE APPLICATION'S DEVELOPMENT.

We work with the company AERYS, specialist of live 3D, in order to offer an "augmented" version of the hut.

The project is composed of two distinct realizations:

-The animation of the masks, colored/lighted depending on the musical score. If this visualization can seem  classic, it actually has never been realized with a whole album distributed under a form of a mobile application to see and to live.

-The substitution of the floor and the ceiling of the hut by apparitions inspired by generative art. This realization will be at the junction of art and mathematics and will involve a collaboration of artists and engineers.

The different tasks will be:

. The development of augmented reality

. The visualization of generative art

. The playing of the music and the display of the controllers

. The display of the Masks + animation algorithm depending on the music

This campaign is also the occasion for us to offer you exclusive rewards that will not be publicly available once the campaign is over.

- COLLECTOR CD Totem & Tabou: limited, signed, and numbered edition of 1000 copies, (only available during the campaign, not available for sale)

- SWEATSHIRT printed with one of the 5 masks of your choice, only available during the campaign.

And for 5€ more get extra minimask on the sleeves!

- CARPET / PICTURE handmade in Peru, in two different sizes, these carpets are unique and gorgeous pieces, handmade by the craftsmen of Lurigancho prison in Peru.

- MASK / SCULPTURE unique pieces made at the occasion of our open days, each mask is made on a wooden frame on which different elements are fixed and lacquered with rods.

EARLY BIRDS GIFT: 1 SWEATSHIRT WITH THE MASK OF YOUR CHOICE /// For an extra 5€ add mini-masks on the sleeves /// + 1 collector Totem & Tabou CD (numbered and signed, only available during the kisskissbankbank campaign) + the application to download in preview and your name on the contributors' list

SECOND CHANCE: 1 SWEATSHIRT WITH THE MASK OF YOUR CHOICE /// For an extra 5€ add mini-masks on the sleeves /// + 1 collector Totem & Tabou CD (numbered and signed, only available during the kisskissbankbank campaign) + the application to download in preview and your name on the contributors' list 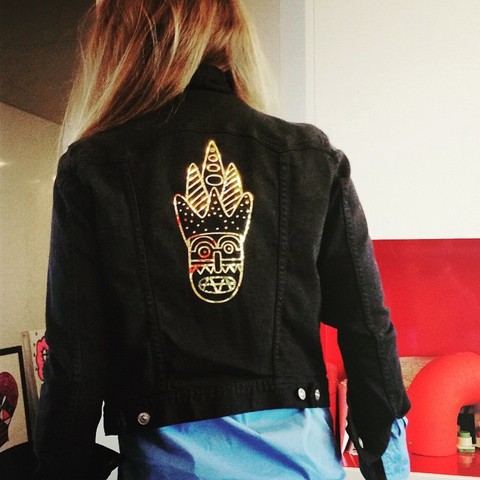 FOIL GOLD DOSMILDOCE JEAN JACKET. PIECE UNIQUE, SIZE XS + 1 collector Totem & Tabou CD (numbered and signed, only available during the kisskissbankbank campaign) + the application to download in preview and your name on the contributors' list