Acclaimed by the public and critics, discover the limited edition film ALL THE GODS IN THE SKY (Quarxx, 2018) dvd/blu-ray collector ! 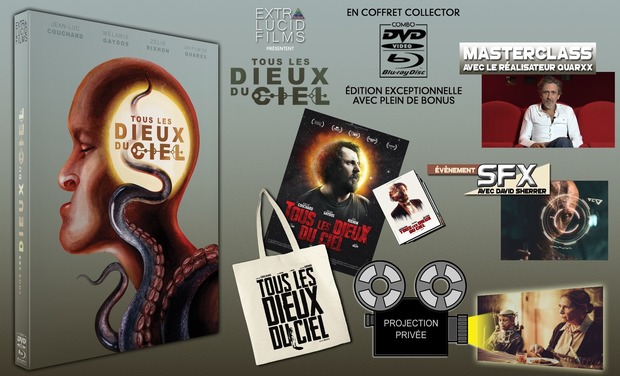 Who are we? A brand new mini french publishing structure: Extralucid Films.

There are two of us, Carine and Patrice. We'll come and give you a short video presentation ;)

After years of experience in our business we decided to embark on a new adventure !

Our first project is a big big big crush. It is therefore a question of releasing on DVD/blu-ray the feature film ALL THE GODS IN THE SKY directed by Quarxx and released in theaters in 2019 and winner of the Audience Prize at the last PIFFF (Paris International Fantastic Film Festival).

The dvd/blu-ray will have ENGLISH SUBTITLES !

(only for the film feature, not the bonuses)

We will put all our heart and energy into offering you the most beautiful edition possible!

And here is the trailer with english subtitles :

Always with the idea of reinventing ourselves, we have decided for the visual to offer you something new and modern. For this we called on the artist Jérémy Pailler:

But we will offer you even better with this digipack (which will also include a 24-page booklet). Indeed, depending on the direction of insertion of the dvd/blu-ray in the box you can choose your visual.

Here is a short video of the model (the final boxes will be printed everywhere, including the white parts that we still see) :

The film received a tremendous critical response from all over the world (yes, yes!):

MAD MOVIES: "All the gods in the sky" is not afraid to trace his own furrow without worrying about any fashion effect, thus heralding a promising future for a Quarxx"

LE PARISIEN : "A film like you won't see every day."

TERROR WEEKEND : "One of the most fascinating film essays of the end of the decade, which contributes to the resurgence of the French fright."

C'EST ARRIVE PRES DE BRUXELLES : "...driven by the hallucinated performance of a surprising Jean-Luc Couchard and a magnetic, tragic and disturbing Mélanie Gaydos."

ROCK N FOLK : "A "monster" beauty represented by the incredible Mélanie Gaydos, actress and model suffering from a rare genetic disease, and whose physical "Star Trek"-asque gives her another form of troubled glamour..."

Well, you'd also like to know what the film is about !

It's a beautiful and strange story :

Simon, in his forties, works at the factory and lives in a decrepit farmhouse. He is a lonely man, in charge of his sister Estelle, severely handicapped following a game that went wrong in their childhood. Despite his remorse and the aggressiveness of the surrounding world, Simon keeps in the depths of his flesh the secret hope of saving his sister by freeing her from earthly gravity. What if their salvation came from heaven?

Did you know that the film ALL THE GODS IN THE SKY was originally a successful short film with the People's Choice Award at the 2017 Strange Festival : A NEARLY PERFECT BLUE SKY.

(only the feature film will have enfglish subtitles, not the bonuses)

The making of the film (59 minutes)

We also offer you surprises reserved only for Kissbankers :

Choose what you want !

PLUS :
We offer you the shipping costs

Masterclass and film screening in the presence of Quarxx :

It will be held on Monday, February 3 at 7:00 p.m. at the Crowfunding House of KissKissBankBankBank. Address: 34 Rue de Paradis, 75010 Paris, France

It's time to come and support us !

And don't hesitate to share the information around you !

A big THANK YOU !

The KissKissBankBank will allow us to cover the acquisition rights of the film ALL THE GODS IN THE SKY and to pay a part of the manufacturing costs.

We would really appreciate being able to exceed the proposed target to help us cover all costs !

We are a new structure and we are starting from scratch.

So we are counting on you to bring this beautiful project to life !

Be many to support us and feel free to share the page of this project !

This dvd/blu-ray collector edition will exist thanks to you !

Collector's box set dvd/blu-ray ALL THE GODS IN THE SKY Free shipping! When it is released, the sale price for poublic will be 25 euros. Delivery February 2020

Collector's box set dvd/blu-ray ALL THE GODS IN THE SKY + 10 postcards + tote bag + your name in the booklet + free shipping ! Delivery February 2020

EARLY BIRDS - Collector's box set dvd/blu-ray ALL THE GODS IN THE SKY + 10 postcards + tote bag + your name in the booklet + poster of the film signed by Quarxx + free shipping + private screening (Paris, France) of the film and masterclass with the director of the film Quarxx. Delivery February 2020

Collector's box set dvd/blu-ray ALL THE GODS OF THE SKY + 10 postcards + tote bag + your name in the booklet + poster of the film signed by Quarxx + free shipping + private screening of the film (Paris, France) and masterclass with the director of the film Quarxx. Delivery February 2020