Support Khadija, helped by Association Féminine El Khir, by collecting the amount of money which will allow her to obtain her new accommodation! 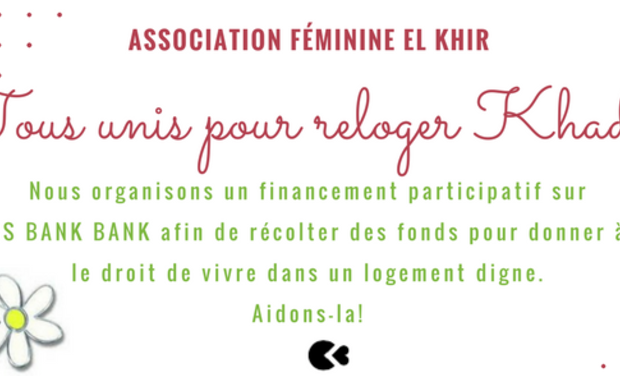 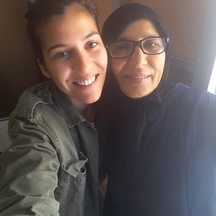 Hello I'm Maud, a volunteer-intern in Association Féminine El Khir, in Essaouira. In the first place, the organism has brought financial aid to this woman.  Since a few days, I have individually decided to take over from the association, trying to complete successfully this fundraising, via Kisskissbankbank.

Khadija El Karch is a 52 years old widow and mother of 3 children. She has been working for 4 years as a cleaning lady at the Association Féminine El Khir. She has benefited from a training course offered by association in 2011. The mission of the training is to accompany women’s integration to the professional life in the region of Essaouira, in Morocco.

Khadija El Karch is a woman from the countryside, who hasn’t been to school and got an arranged wedding with a man she didn’t know. She moved in the city of Essaouira with her husband, hoping to have a better life.

Unfortunately, her husband had important psychological problems that only worsen the situation of the couple; he was following Khadija when she was getting some water, while carrying her child on her back, he kept thinking she would cheat on him with another guy. He was a couturier but didn’t have his own workshop. He worked with other artisans in their workshops. Since he had a quite violent and impulsive character, he couldn’t keep his job. Khadija suffered from numerous violence’s that pushed her to separate herself from him for a certain while. She got the courage to leave him and to look for another accommodation. For lack of means, she rented a room, in the disadvantage district of the city (“Mellah”). She was oriented towards the Association Féminine El Khir, to engage the divorce proceedings (a centre where women’s can be heard and judicially orientated, some medical and psychological help are offered too). Her husband died while the proceedings were ongoing.

Khadija then becomes a widow with three children under her responsibility. Currently she still lives in this room in the ancient Jewish district, in unsanitary conditions (no water, no kitchen and common toilets to share with the neighbours), and her three children since her salary cannot allow her to find another accommodation.

It's HER !!...  Have you seen this lovely smile she has almost never left !

And this picture... it's the front door of the room she's renting in Mellah!

Here also... it's the room she lives in!

The Associaiton Féminine El Khir is Moroccan association created in 1998 in the province of Essaouira. The association comes to the aid of women in difficult situations: singles mothers, widows, divorced, assault domestic victims, isolated women in rural environment... The association also advocates women's leadership with one of these three projects which are "the move towards socio-economic autonomy of women in Essaouira’s province”.

Its principal goals are to promote the women’s rights, accompany them in the judicially and psychologically in the aim of promoting the economic power of women while developping activities to generate incomes.

GOODMORNING!!! First of all, a big CHOUKRANE (thank you in Arab!!) to all of you for your participation!! :D :D :D

It's me (Maud Hilmi) who will receive the funds collected on this platform, on my bank account domiciled in France… because SIMPLER & EASIER for this fundraising (Euro Zone = Secured Transfer) !!!

I will, obviously, transfer all the money collected to Khadija El Karch, for her greatest DELIGHT (Boussah to you)!!

AND WHAT ARE YOU GOING TO DO WITH THAT MONEY?

So as far as the fundraising is concerned, it will allow our happy Khadija to transfer the sum of money requested to the municipality, in order to obtain her new accommodation (GREAT)!!!

So, if we’re not too bad in mathematics, the account is GOOD!! ;D

In the case where the donations would exceed the amount requested (WOW CHOUKRANE BEZZAF !!), we will furnish the cosy apartment of Khadija, located in the housing estate “Tafoukt” in Essaouira. And it will also let us make you MORE contribution presents to our dear donators, who will always be welcomed in Essaouira and greeted with a delicious glass of Mint Tea (homemade by Khadija, of course!!) inside the Association Féminine El Khir.