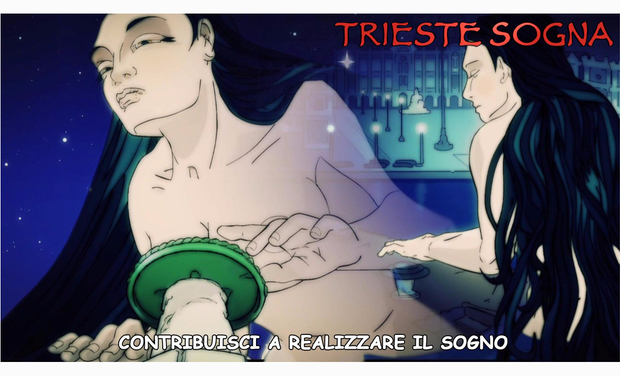 Trieste Dream is a short animated film that comes from a series of chance encounters between professionals in various fields working in Trieste.

The boards of the illustrator Paola Ramella fascinated Carmelo Settembrino (a video and communications professional, director of short films and commercials) who decided to direct the project with Guendal’s (author of short stories, novels and comic books) screenplay.

This time it’s a little girl who tells her grandfather the story of a contemporary legend: what happens when a sleeping Trieste is animated.

From the waves of the sea rises a mysterious woman, who, by pressing the cleat with the Wind Rose on the tip of the Molo Audace, triggers a series of magical and surreal events. Thanks to her enchantment the statues come to life, the Miramare Park is filled with dinosaurs while the sphinx emerges gracefully,  and gradually fabulous events follow, trees swim and the painter Timmel will paint a woman astronaut in real life.

Trieste is often described as a city in some respects asleep, away, suspended between past and future, between fantasy and reality, but precisely because of such a unique atmosphere, full of nature, art and history. We do not intend to wake abruptly, but what we love, we want to make it known and loved just as in its exceptional and unique dimension of “dreamer”.

Only thanks to the passion for this project there is already a 2 minute trailer which was presented as a Special Event on March 21 at the prestigious festival in Cortina Cortinametraggio and simultaneously also in Trieste at the National Cinema.

The trailer got excellent feedback from the public and experts, so much so that it took home a prize... and an exceptional godmother, the Sicilian actress Maria Grazia Cucinotta.

Animation takes inspiration from cinema, short films, comics and drawings. For every second there are at least 12 to 25 frames (in this case not photos but drawings!) that our eye perceives as a fluid and seamless thread.

The process of implementation is therefore long and expensive, but the result is unmistakable.

For this project we play with various techniques: some of the real places that are perfectly recognizable in the drawings are then transformed in video and an animatic is created, that is the drawing is moved by merging it with the video. The design then mixes with reality and it may happen that the palaces are drawn, but the sea that breaks on the dock in front is real.

Times and costs are different from a short film, but we believe animation is the right language to tell the magic of our story.

And another look at what came to life: Paola Ramella’s boards, the visionary illustrations which catapulted us in the oneiric dimension of this story-

By supporting this project, you will help us complete the boards, for now 5 out of 12 expected from the screenplay.

Trieste Sogna was born from the experience and the passion of professional ‘Triestines' (or ones who became so, as in Carmelo's case, for love) all in love with Trieste so much that they have already enjoyed and been committed to tell stories about it, each one in his and her own field.

From the first meeting with Paola, there were others which expanded the group. The team is now:

Paola Ramellan (idea) - born in Trieste in 1970, where she lives and works. A self-taught cartoonist, she has published various comics including "Lions & Saints" (ed. Esaedro) and "The green whisper and the purple thought" (ed. Safarà). She has a new graphic novel coming out in April (ed. Ferrogallico) "Sergio Ramelli". She’s the creator of Tergestea, the testimonial of the Trieste cartoon show “Fumettipergioco". She teaches drawing, comics and illustration at the School of Trieste GRAPHITE.

Guendal (screenplay) - writer and screenwriter, he lives and works in Trieste. Author of short stories (including "Unnamed", winner of the Silmaril prize 2005), novels (“It shines high and lights everything") and comics ("Lions & Saints", "The green whisper and the purple thought”).

Carmelo Settembrino (director, editor e compositing) - the passion for communication in all its forms has always pushed him to master its tool. Oral communication seemed too restrictive and so, looking for new forms, he blends skills and passions through the gestural and corporeal theatre, sound, visual, landing in what in his opinion synthesizes it all: film communication.

Marco Podda (original music) - a multifaceted and versatile composer, graduated in guitar and a voice expert (singing and speaking). In over thirty years he has written music scene for over 80 shows and has won a catalog of over 200 opus numbers of which more than 70 were published in print and has assisted Giorgio Pressburger in the "Music for the Theatre" courses at the DAMS of Gorizia. The Teatro Verdi in Trieste has commissioned him a work on a text by Claudio Magris in 2019.

Winner of national and international competitions, his musical works are performed and published in Italy and abroad, published by Carrara, Pizzicato Verlag Helvetia and recorded for Tactus, Audio Ars Studio, Erato, Rivo Alto and for the national RAI. His compositions are acquired and stored by the US Federal Library of America and the National Library Helvetica.

Denis Rapisarda (animation) - a young creative born in Trieste, fascinated by the world of video games and design, he began to devote himself to animation while still in high school finishing among the 10 finalists of the competition "Draw a Spot" at the 16th video VivereilMare festival.

In 2014 he worked to create animated shorts for the "Sulake Corporation Oy”, he later created animations for the advertisement of a board game and in 2016 was in the "TACT" festival as a cameraman and video editor. Since 2017 he has launched himself in the adventure of Trieste Sogna and its animations.

In over twenty years of business, including live, post-production and sound design works, he has worked in numerous national and international productions, some of which are winners of prestigious awards, among which “The last beach” by David Degan and Thanos Anastopoulos presented at Cannes 2016 in the Special Screenings section, “Dancing With Maria” by Ivan Gergolet, winner of the Critics Award - Venice Film Festival 2014, “Habibi” by Davide del Degan, winner of the 2011 Silver Ribbon Festival.

Fabiana Bisulli (voice) - She has always been passionate about music, singing and all the possible and unimaginable ways of how the vocal cords can vibrate. She approached radio at the age of 19 years for fun and the experiences in Rome and Milan and some national networks confirmed this as her career. She worked as a voice actor for cartoons such as advertising as a speaker and radio host; among the most beautiful and important experiences that Capital Radio which she always carries in her heart. Since last summer she has been working with the regional RAI headquarters in Trieste where she hosts two programs, one on our talents ‘made in Fvg’ around the world, and the other on our food.

Adriano Giraldi (voice) - born in Trieste, he attended the school of the Piccolo Teatro of Milan and made his debut in 1981 with the Teatro Stabile company of Friuli Venezia Giulia "Karl Valentin Kabarett" directed by Giorgio Pressburger.

He then worked at the Teatro Stabile in Rome with Luigi Squarzina, Olimpico in Vicenza with Sandro Sequi, in Bologna with Leo De Bernardinis, in San Miniato with Krzystof Zanussi.

Among the most recent theatre productions "The Method" by Jordi Galceran and directed by Andrea Collavino and "Trst mesto v Vojni / Trieste, a city at war" directed by Igor Pison, "As the horses sleep standing" by and with Paul Rumiz and "Social Comedy" directed by Marko Sosi.

Cristina Milovan (project coordinator) - born in Trieste, where she discovered a passion for cinema as a child. After living in Hong Kong and Canada during her teenage years she went to England where she studied film, theatre and television at the University of Reading. She worked as an editor in London in a film animation production company and came back to Trieste in 2015 where she continued to work in the field of post production collaborating on various projects in the Trieste area. Over the years she has collaborated with Carmelo 7mbrino in projects linked to the territory including the short film 'Kleine Berlin - The Little Berlin of Trieste' and the Street view live contest TurismoFVG advertisement contest winner.

Radio In Corso is a social promotion association and is the web radio of the University of Trieste.

It provides training and services in 360 degree communication.

It was awarded as the best web radio of Friuli Venezia Giulia, and has been engaged for decades in the promotion and enhancement of all realities that express value content and creative wisdom.

With the result of the collection we intend to cover some of the expenses already incurred and to support the realization of the short film.

The total budget needed for the project is € 60,000, most of which we are receiving from private sponsors and the interest in the project is very concrete also by the institutions and public bodies.

Thanks to your contribution we can

- finish animation: as explained, a long and expensive work;

- reimburse the professionals who participated and the other figures who will collaborate in finalizing the product;

- promote Trieste Sogna in the most prestigious circuits linked to this language: festivals, reviews, competitions;

- pack and distribute the short together with Paola Ramella's boards.

We need your help to make this dream come true and share this extraordinary story with as many people as possible, who knows, it might become a contemporary myth.

The choice to turn to you was inspired by the desire that Trieste Sogna belongs to everyone who support the project. We like the idea that a piece of this work can belong to every single person that contributes to realizing it. Independent cinema depends on you!

A collective dream can become a real dream.