"Tu es ceci" is the second short film of Faustine de Bock made with Holistic Productions. To satisfy her addiction, a woman kills men to eat them. A miserable everyday life, a frantic quest disrupt by an encounter. 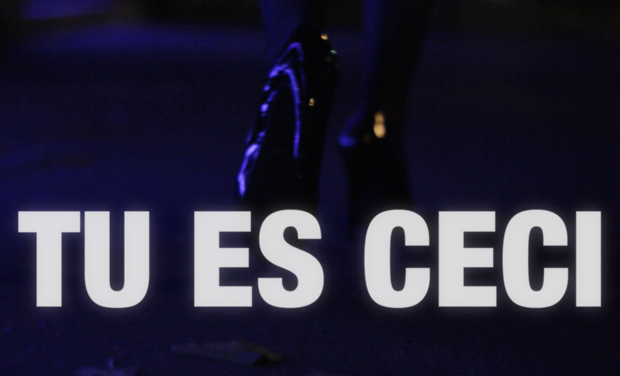 To satisfy her addiction, a woman kills men to eat them. A miserable everyday life, a frantic quest disrupt by an encounter.

At first, Tu es ceci depicts a world where everything is a battle of will. The dependancy over her senses. The woman over her preys. One night, an encounter, one among so many, and everything is turned upside down. Uncannily, she can't kill him, she doesn't have the strength.

Suddenly, the process is broken. Is becoming aware of her dependency mean not to be addict anymore ?

Between enslavement and loss of innocence, Tu es ceci is about one being becoming free and toughly making up with himself. Tu es ceci wonders about alienation. Through an imaginary addiction based on cannibalism, the film experiments an absolute dependency. In the film, murder and cannibalism are singular symptoms of a transposable mechanism. A metaphor to represent addiction. It's not about showing them on the screen, it's about using their symbolic horror.

Tu es ceci will be shoot in march in Paris during 4 nights. 2 nights for the outside and two for the insides. From La Défense to Olympiade, you can see some of our shooting locations in the different photos of this page.

Our crew already worked with Faustine on her previous short film, Transfiguration. It's a crew that has been together for 2 years. Florent Thoraval as director of photography, Mehdi Lévêque as sound engineer, Simon Girard as editor and Thibaud Marty as sound designer. For this film, we grow bigger, Sarah Violleau as first assistant director, Romain Lemahieu as set decorator and  Victor Férès as costume designer.

The film should be finished for summer 2013. We'll do a premier on Paris, then the film will be send to festivals all around the world. And we'll let you know when Tu es ceci comes to a short film festival near you so you can take your friends and see your name in lights.

Before shooting, we need to create the different elements which will give life to the film universe :

- Create the claws for the main character

- Build a scratchable wall and a sizzle neon light

While shooting, it consists in having the right tools to create the film the director thinked up and to ensurethe crew's wellbeing, they're going to work 4 nights in a row, of which 2 outside. We already got the camera and sound recorder. The crew is working for free. They allow the film budget to be cut off by 2/3. But we still need you for :

After the shooting, we have to edit, grade and mix the film. We also ned to create the communication medium : posters, press kit, DVD. We own most of the post-production equipment and the crew also accept to work for free. But we still have to fund :

- Make a film premier in a theater

Finally the cost inherent to this fund raising :

We'll spend every penny of your contribution on making the film as good as possible, and keep you in the loop about where we're up to.

Faustine de Bock, 26, graduated with a Cinema Degree from Paris Sorbonne University and an Editing Degree from ESEC (a cinema school in Paris). She completed her training with acting classes and actors’ direction workshops at Alain de Bock’s studio in Paris. In 2006, she became the assistant of Pierre Zarcate, a painter, who introduced her to contemporary art.

Over the course of her training, she directed a short film Le Corps de Pierre and two experimental videos, Les Espaces du Rêve and Abondance.

In 2012, she is the assistant of Vivianne Vagh, a video artist and documentary-maker. Together they prepared a series of Mediterranean artists’ portraits for the Granet museum in Aix-en-Provence released in January 2013. She also created, with Simon Girard, Konpyuta VJs, a duet of video performers, working with the DJ crew of Exploration Music for their parties.

In May 2012, they co-directed a short film, Transfiguration. Based on the film’s universe, they created Post-Transfiguration, a performance mixing dance, music and live visual. The premiere of “Post-Transfiguration” was presented during the Artchikult Festival in July 2012 at the Café A in Paris.

Eric Larzat - the man from the coffee-house

Films and photos which Tu es ceci took inspiration from

Your name in the credit.

The script and one sequence of the storyboard + previous rewards.

The script used by the main actress on set + previous rewards (apart from those in limited quantity).

We organised a private projection of the film at your house + previous rewards (apart from those in limited quantity). Only available in France.

One photo from an exclusive shooting with the main actress + previous rewards (apart from those in limited quantity)..

The script used by the director on set + previous rewards (apart from those in limited quantity).