A fun & epic party game to play with everyone! 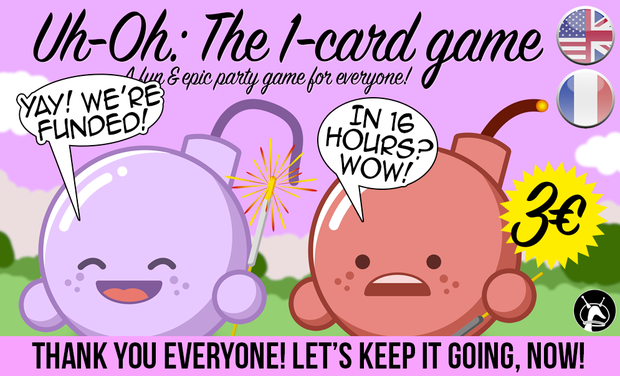 Uh-Oh is a game that requires only one card, whose rules can be learned in less than a minute and plays at a crazy pace!

Young and old, amateur gamers or probability calculators, family or friends, Uh-Oh has been designed to work in all circumstances.

Carry it everywhere: Store it in a pocket, purse, wallet, sock ... and take it out as soon as there are 3 or more people in one place!

Uh-Oh is a game by Phil Vizcarro,
for 3 to an unlimited number of players,
which can be played at any age after 6, for games around 5 minutes of playtime.

1. Freely define the first player, who places the card on its Yay! side in front him.
In our example, Skeletor will play first.

2. Each player makes a secret bet under the table (or behind his back) with the fingers of his hand, from 0 (closed fist) to 5.

3. Everyone reveals their hand at the same time.

4. The first player moves the card in a clockwise direction, a number of spots (players) relative to his bet.
In our example, Skeletor moves the card 1 spot towards Phil.

5. The player seated to his left then moves the card by the number of players relative to his bet, even if the card is not in front of him, and so on, until all bets have been played, or two Zeros have been played.
In our example, Phil doesn't move the card, as he played a Zero, but activates it. He flips the card to its Uh-Oh side. Then Nerdzilla moves it 4 spots from Phil (onto Mister T), Then Rex moves it 3 spots (onto Nerdzilla), then Mikey moves it 3 spots, back in front of Mister T, which detonates the bomb, as he played a Zero.

Then the card is placed on the player on the left of the eliminated player, back on its Yay! side, and another turn begins.
In our example, it gets back to Skeletor... Well, what are the odds.

In our example, Skeletor moves the card 5 spots, which brings it back to him. Then Phil activates it, Nerdzilla moves it 4 spots, Rex 3 spots, then Mikey 3 also, which brings the card again back to Skeletor. Only this time, as it is activated and everyone has played, it blows in Skeletor's face!

Don't be like Skeletor. Don't be a sore loser.

The first Zero activates the Bomb without moving it.
(turn the card over on the opposite side).
The second Zero blows it up!
(the player in front of whom the bomb is gets eliminated).

If the card has been moved by the total number bet by all players without exploding, 2 things can happen:

If three rounds end without a single explosion, then the bomb becomes a Supernova and erases the planet. Everyone loses. Maybe next time you won't play as safely.

The winner is the last to survive.
Did you guess that?
Congratulations, you are awesome.

There you go, it's as simple as that, and it promises sessions where you'll wreck your brain to try to read the way other people play.
Are you going to activate the bomb as soon as possible, or try to get it away from you? Are you going to manipulate other players by announcing your intentions or bluff all the way?

So many strategies, so many possibilities ... and chances that it will go horribly wrong :D

Uh-Oh is only 3€, shipping included!
But if you want to share the love, get more to offer around as gifts, we've created several pledge levels with the price dropping heavily each time!
You'll feel like Santa without digging on your savings!

Plus, we've created a special Pledge, the "Get Uh-Oh-ized", where you get to have a unique version of the game, with your face on it!
Now it’s your chance to never die (or the closest to it). Get the Hu-Oh-ized Pledge, send us your picture, and we’ll create a unique card just for you. You’ll be the bomb, for sure!

All the benefits from this pledge will go directly to the illustrator. Cosmo Duck won't take a penny from it.

Uh-Oh will be shipped to you via mail. You'll receive the card in physical form, and the rules, in the language you chose, via JPG & PDF, in order to keep it in your phone (or just memorize them, as they are really easy to get!).

These languages are available for the moment:
- English
- French

These languages will be unlocked during the campaign:
- Spanish
- Catalan
- German

Should you wish to have the rules translated in another language, let us know in the comments, we'll see what we can do!

What you see is what you'll get

We wanted a fun and straight-forward campaign. So there won't be any special content to be unlocked during the campaign. What you see, is what you'll get, and what you'll get is a really fun and original game at a really cool price.
Minimal impact on our planet, maximal fun for you and your friends.

Cosmo Duck is an artistic studio founded in December 2017, which evolved into an independent publisher in July 2020.

Our goal is to offer games that are different, in stores, on our online Club Cosmo, or as here using crowdfunding.

With 3 successful crowdfunding campaigns (on another platform), Cosmo Duck has proved they always delivered their projects and done everything possible to satisfy their community.

A creative collective above all, Cosmo Duck, conveys positive and / or fun messages in their games, and draw numerous references from the popculture, mainly that of the 80s.

Phil Vizcarro is an author, translator and board game designer. Born in 1978 in Paris, France, he spent most of his childhood in front of the TV, and fell in love with popculture, comics and a whole bunch of stuff that others found nerdy or uninteresting.
Persuaded to be a ninja turtle, he mainly eats pizza and seeks every day to make the world a little better (or less worse).

In December 2017, he founded Cosmo Duck, and recruited a team of creatives worthy of an 80s series, with whom he proposes a new way of seeing the relationship between authors / illustrators / publishers.

The funding will be used to produce the game, pay for shipping, taxes, pay the author / illustrator and to build a solid gold swimming pool in the offices of Cosmo Duck. Because why the heck not.

Joking aside, Uh-Oh is a game that is part of our desire to ensure a more reasonable production, and fairer remuneration for our game designers and illustrators. By participating in the campaign, not only are you enabling our game designer to be paid better for his work, but you are sending a strong message, that you too are making a difference.

Plus you get to receive a really cool game.

The cards will be produced by either one of our printing partners, in Belgium or in Turkey. Production will start 3 weeks after the campaign ends and game will be shipped to you as soon as we get'em. So you'll have them in time for the holidays!
Either you decide to spend them at the beach... or at home, you'll get to have fun with Uh-Oh!