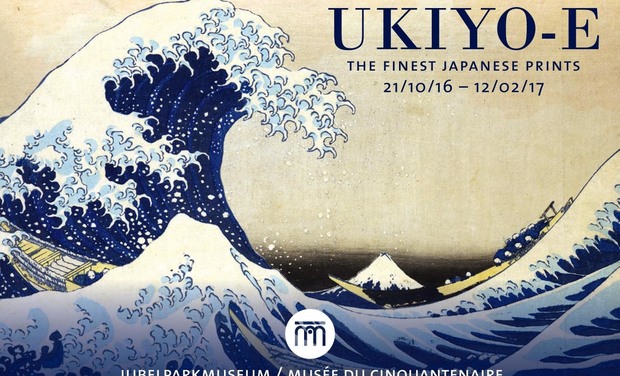 Ukiyo-e literally means pictures of the floating world in Japanese. The origin of the term floating world is Buddhist, and it refers to life on earth characterised by suffering and the ephemeral. This negative connotation disappeared over time and in the 17th century, the term ukiyo became synonymous with a world of fleeting pleasure. This hedonistic meaning is indicated by the suffix e ("picture") in the term ukiyo-e.

The exhibition is totally unique and will put on display more than 400 Japanese engravings selected from among the finest specimens of the Musée du Cinquantenaire’s spectacular collection. The engravings that will be on show are incomparable and famous for their extraordinary quality.

This exhibition will therefore offer an exceptional panorama of the art of Japanese engravings, from its beginnings in black and white to the superb polychrome series from the end of the 19th century. Furthermore, a selection of contemporary Japanese objects, such as lacquers, kimonos and armour, will help to elaborate upon and better understand these marvellous works of art in their cultural context.

Besides the chronological order of the exhibition, a certain number of specific themes will be presented:

special attention will be given to private luxury editions known as surimono; these engravings used the finest printing techniques and were printed as limited editions for the highly select societies of Edo poets.

The exhibition will end with Shin hanga engravings, a new impetus dating from the beginning of the 20th century.

Visitors will also have the chance to discover the contemporary works of Dimitri Piot, a talented young Belgian artist whose muse is the Japanese engraving.

Context of the exhibition

In 2016, Belgium and Japan will celebrate 150 years of diplomatic relations and friendship. Belgium and Japan established these relations in 1866, when they signed their first treaty of friendship, commerce and navigation. In May 2014, the prime minister of Japan and the prime minister of Belgium agreed that both countries should seize the opportunity offered by this 150th anniversary to reinforce their bonds of friendship and encourage cultural exchanges.

What better then, than to set up this exhibition, thanks to the help of Kisskissbankbankers, to pay tribute to Japan and the Japanese, by showing a selection of the museum’s finest treasures!

Our sincere thanks + 1 bookmark of the Ukiyo-e exhibition